by Dr. Eric M. Baer, Geology Program, Highline Community College
Jump down to: How to read | What the graph shows | Why is this important? | Advanced skills


Teaching students how to read a cumulative percent graph

Cumulative percent graphs can be challenging to students. It is unlikely that they have seen anything like these plots before - they are not a single line from which to generate a set of data. Often, the plots also have significant amounts of extraneous data which can distract students. As geologists, we encounter these types of plots in many situations, from sediment size distribution to the naming of igneous rocks.


These are only a few examples of types of cumulative percent graphs used in geology.

However, it is important to keep the basic concepts in mind when teaching to students:
To illustrate the use of cumulative percent graphs, I often generate a cumulative percent graph of heights of students in the class. One can use the actual data from students, or one can use dummy data. I point out the height at which one half of them are taller and half a shorter, and then pick other points on the graph to illustrate how it can be used. One could also use ages, weights, or test scores. This can then lead to discussion of standard deviations, skew, and other statistical descriptions of distributions. 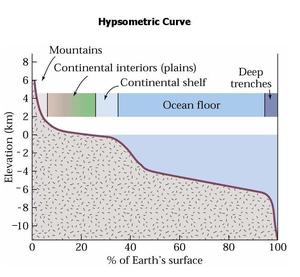 The hypsometric curve from Marshak "Earth - Portrait of the Planet" 2nd ed. p. 37.

Bathymetric map of the Earth

Bathymetric map of the Earth with all elevations below 3 km blackened. 47% of the globe remains colored. You can create your own maps with any elevation blacked out.
When teaching the hypsometric curve, I often hold up a globe and ask how much of it would be colored if I colored in all the areas above 2 km above sea level, sea level, 2 km below sea level, etc. I use these as ordered pairs to begin the graphing process.

Why should I care about this graph?

I use the hypsometric graph in many of my classes because it gives evidence that there are two kinds of crust on Earth and it is important that students understand why we interpret that the Earth has continental crust and oceanic crust. I also point out that this graph shows rather surprising information - while there is a great range in elevations on the Earth, 85% of the Earth's surface falls into two narrow bands of elevation - from 2000m above sea level to 500 m below sea level and from 3000m below sea level to 6000m below sea level.

Added on features can lead to mis-understandings 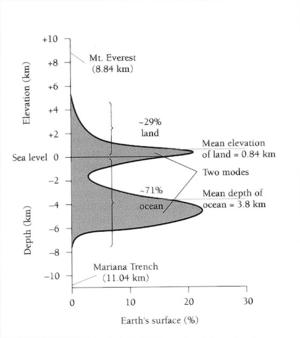 percent graphs have a great deal of extraneous information added to them which can cause students to misunderstand or be distracted from the point of the graph. As an example, in the hypsometric curve shown above from Marshak (2005), the illustrator has chosen to fill in below the curve. This has no significance, and can even cause students to confuse the graph with a diagram of the features of a passive margin. The bar at the top assists in this confusion, since it seems to be labeling parts of the graph features of the ocean floor as does the coloring of all areas above the curve but below sea-level blue. Another common error in textbooks is to convert this graph into a histogram (as is shown to the left) but then to smooth the bins. This is very confusing, because you can add up all the points on the graph and they will exceed 100%. True histograms cannot be smoothed, although one can plot a smoothed curve if one changes the axis to %/km and then use calculus to have the bin size approach zero.

What can I do beyond this?

The hypsometric graph of Venus from Planetary Chemistry Lab at Washington University adapted from Fegley and Treiman (1992).

When graph reading is an essential outcome of a course, I will often have students examine the significance of the slope of a line on a cumulative percent graph. I might do this by having them pick out breaks in slope and look at the distribution of elevations on Earth. They quickly find out that, despite the large range of elevations on Earth, 85% of the Earth's surface is in two narrow bands. I usually try to express the surprising nature of this result by making the analogy of having a class of students whose heights ranged from 4 feet to 7 feet, but a third of them were all 5'5"-5'6" and half were 5'11"-6' tall. We then examine the slope of the graph and see that the steeper the slope in a cumulative percent graph, the more common/greater frequency.

Another way of challenging students is to examine the hypsometric curve of another terrestrial planet, such as Venus. Mars, the Moon and Venus all lack the bimodal distribution of elevations that we have on Earth. As a result, they are not interpreted to have 2 different types of crust and plate tectonics is less likely.