Developed by participants at the 2005 Workshop

As you read some expository text, you may reach a point at which your understanding becomes fuzzy; you decide to either reread the text or stop and work out some illustrative examples to make sure you've gotten the point. In the midst of writing an article, you may notice that you've wandered from your intended outline. You may scrap the past few paragraphs and return to the original outline, or you may decide to modify it on the basis of what you've just written. ... In the midst of intellectual activity ... you kept tabs on how well things were going. If things appeared to be proceeding well, you continued along the same path; if they appeared to be problematic, you took stock and considered other options. Monitoring and assessing progress "on line," and acting in response to the assessments of on-line progress, are the core components of self-regulation.

The major issues are illustrated in Figures 3 and 4. Figure 3 shows the graph of a problem solving attempt by a pair of working as a team. The students read the problem, quickly chose an approach to it, and pursued that approach. They kept working on it, despite clear evidence that they were not making progress, for the full twenty minutes allocated for the problem session. At the end of the twenty minutes they were asked how that approach would have helped them to solve the original problem. They couldn't say. 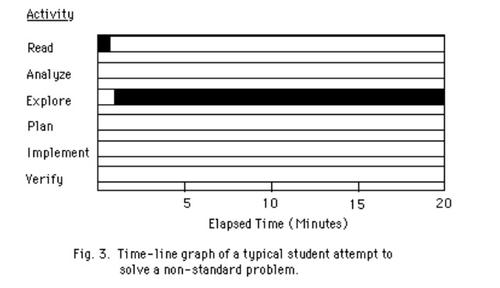 The reader may not have seen this kind of behavior too often. Such behavior does not generally appear when students work routine exercises, since the problem context in that case tells the students which techniques to use. (In a unit test on quadratic equations, for example, students know that they'll be using the quadratic formula.) But when students are doing real problem solving, working on unfamiliar problems out of context, such behavior more reflects the norm than not. In Schoenfeld's collection of (more than a hundred) videotapes of college and high school students working unfamiliar problems, roughly sixty percent of the solution attempts are of the "read, make a decision quickly, and pursue that direction come hell or high water" variety. And that first, quick, wrong decision, if not reconsidered and reversed, guarantees failure. 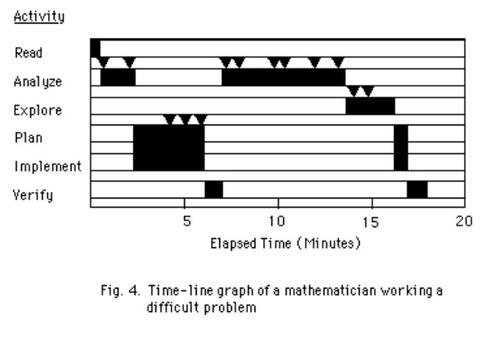 Figure 4, which stands in stark contrast to Figure 3, traces a mathematics faculty member's attempt to solve a difficult two-part problem. The first thing to note is that the mathematician spent more than half of his allotted time trying to make sense of the problem. Rather than committing himself to any one particular direction, he did a significant amount of analyzing and (structured) exploring -- not spending time in unstructured exploration or moving into implementation until he was sure he was working in the right direction. Second, each of the small inverted triangles in Figure 4 represents an explicit comment on the state of his problem solution, for example "Hmm. I don't know exactly where to start here" (followed by two minutes of analyzing the problem) or "OK. All I need to be able to do is [a particular technique] and I'm done" (followed by the straightforward implementation of his problem solution). It is interesting that when this faculty member began working the problem he had fewer of the facts and procedures required to solve the problem readily accessible to him than did most of the students who were recorded working the problem. And, as he worked through the problem the mathematician generated enough potential wild goose chases to keep an army of problem solvers busy. But he didn't get deflected by them. By monitoring his solution with care -- pursuing interesting leads, and abandoning paths that didn't seem to bear fruit -- he managed to solve the problem, while the vast majority of students did not.

Alan H. Schoenfeld is vice president of the National Academy of Education. He is also a past president of the American Educational Research Association, and is currently a Fellow of the American Association for the Advancement of Science. Alan Schoenfeld holds the Elizabeth and Edward Conner Chair in Education. His research deals with thinking, teaching, and learning, with an emphasis on mathematics.