Generally there are five main concepts that our students struggle with when thinking about floods:

Students often get confused by the variety of ways the size or magnitude of flows in rivers are measured and communicated. It is not that these concepts are difficult, however if these terms are not explicitly defined, students often end up perplexed.

In class, and for most hydrologic needs, the discharge (also called flow) is the critical measure of the river. However, it is difficult to measure discharge, so the most common way flows are reported in the media is by stage. In the case of a flood, news reports will often say that a river is "5 feet above flood stage". Floods and rivers also have a crest which is often reported in relationship to flood stage as in "the river will crest at 7 feet above flood stagetomorrow."

Rating a river: the relationship between discharge and stage

The relationship between discharge and stage is empirical and typically is represented graphically as a rating curve.

Rating curve for the Connecticut River at Montague City station. Details
The making of a rating curve is difficult, but is crucial to taking measurements (like stage) and turning them into the much more useful discharge information. Ideally, I would take students out to a stream a couple of times and have them measure discharge and stage so they get an idea of these measurements (see Discharge and Sediment Transport in the Field for an example). That is usually not possible, so I lead an open ended discussion of how we can measure the discharge. I start out with the definition of discharge and then have them come up with the methods they would use. I then have them think about how, if they made that measurement multiple times over many years they could develop a rating curve.

Rating curves are an excellent topic for class discussion because they often seem simple to students at first glance, but are much more complicated. I often ask things like "what happens to a river when the discharge increases?" and then have students explore the rather complicated answers. For example, rating curves may change with time and there is often significant scatter in the data, which can be used as a launching point for discussing regressions and error.

Flood stage and inundation area: it's not just how high the river is

Often students have a difficult time realizing that the area of inundation for a flood depends not just on the stage, but also on the slope of the ground around the water. This is often expressed as students:

These same misconceptions are also true for non-stream flooding events such as tsunami and storm surges where they expect coastal damage to be a fixed distance inland.

To help with these misunderstandings, instead of going straight to a mapping of flood inundation levels on a map,

Wildhorse Canyon 2001. Details
I often have students do a couple of cross-sections along differing parts of the stream/river so as to illustrate that the aerial extent of flood inundation is dependent on the topography of the stream channel.

For some students that really have a hard time visualizing inundation area as a function of topography, I have an inexpensive model of a stream made from a plastic food storage container and modeling clay. I have one stream channel narrow and steep sided and the other broad and relatively flat. I then pour water into the model to simulate the rise of water from a flood and see the difference in inundation area. In the steep valley they can see that the flood does not spread far away from its original channel whereas in the broader valley the area under water is much greater.

The impact of a flood that raises the water level of a stream by 10 feet is very dependent on the slopes of the valley. In a steep canyon, there might be no significant impact, while on a broad flood plain the water could cover a great area and do tremendous damage. So the damage in a flood is not only dependent on the discharge, but also the topography around a river. In fact, engineers often build levees to artificially steepen the sides of a river in order to reduce flood damage.

Flood forecasting: forecasts based on historic data and the "100-year flood"

Pickup truck in floodwater. Details
Flood forecasts are determined by examining past occurrences of flooding events, determining recurrence intervals of historical events, and then extrapolating to future probabilities. These calculations are often very difficult for students to understand because of the use difficult graphs to extrapolate data. Typically, the maximum annual discharge is examined and ranked to generate a recurrence interval for historical discharges. The calculations needed to make these forecasts are discussed on the recurrence interval page and the probability pages.

The determination of recurrence intervals has many inherent assumptions that are often false. One assumption is that each flood event is independent of previous flooding events, which is often false. Another assumption is that the occurrences and recurrence intervals of floods in the past is the same as the occurrences in the future. Because drainage basins are changed by human activities and other events, and rainfall may be changing due to local or global climate variations, the extrapolation of past events to the future may be invalid.

Peak discharge vs. recurrence interval of the Red River in Fargo, ND. Details
Once the recurrence intervals of historic data are determined, these are plotted on graph paper in order to extrapolate to events beyond the historical record. Many exercises use log-normal graph paper to make this graph. However, this assumes a log-normal distribution of flood data when there are many possible distributions including log-normal, Gumbel, and Pearson distributions. A correct (at least according to the U.S. government) manner of determining flood frequency is to do a Log-Pearson Type III analysis.

So a flood discharge that has a 100-year recurrence interval has a 1% chance of occurring or being exceeded in a given year. The stage of such a flood can be back-calculated using the rating curve for the river. Once the stage is known, a topographic map can be consulted to examine inundation.

An example of taking historical discharges to forecasted inundations 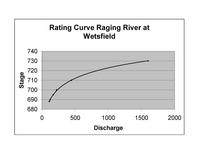 Rating curve for the Raging River. Details
The town of Wetsfield sits on the Raging River. They are planning to install a new sewage treatment plant and want to know where to put it. Concerned by potential damage from floods, they decide that they need to examine several proposed sites for flood risk.

They first gather data from a local stream gauge which shows the maximum annual stage each year. Unfortunately, the gauge has only been operating for 16 years. They then assign a recurrence interval to each of the year's peak floods.

What is a one hundred year flood?

The term "a one-hundred year flood" is actually a misnomer, and as a result causes a great deal of confusion with students and professionals alike. What is really meant by this term is a flood with recurrence interval of 100 years - one that has a 1% chance of occurring in any given year. There are several ideas and resources for teaching recurrence intervals for floods and other events on the recurrence interval page.