What's so hard about angles and trigonometry?

An understanding of angles and the ability to manipulate trigonometric expressions is essential for the introductory geoscience student. Geoscientists use both of these concepts in numerous applications, from coastal geology to mineralogy to geologic mapping. Helping students to develop the tools they need to understand these important concepts can be challenging. Most college students have learned about trigonometry at some point in their high school career (remember "soh, cah, toa? sin = opposite/hypotenuse..."); however, moving beyond the abstract mathematics to application is often difficult for the student.

Trigonometry and angles are used in a wide variety of geoscience topics, including: 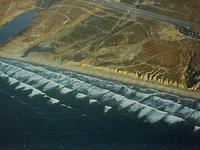 Because everyone has different ways of learning, mathematicians have defined a number of ways that quantitative concepts can be represented to individual students. Below are some ways that angles and their relationship to trigonometry are used in geoscience concepts.

Commonly, students will have encountered angles in degrees: "an angle of 90°", for example. In mathematics, the coordinate system used to talk about angles is a "right-handed" coordinate system - 0° and 180 ° are parallel to horizontal and 90° and 270° are parallel to vertical. Angles increase going counterclockwise from horizontal (in other words, 3 o'clock is 0°, noon is 90°, etc.).

Compass showing the left-handed coordinate system used in geosciences for direction. Details
As if angles and trigonometry weren't confusing enough - for geologists, the coordinate system is turned on its side and flipped over (it's left-handed). Compass directions are arranged like a clock - 0° (north) is at 12 o'clock, 90° (east) is at 3 o'clock, 180°(south) is at 6 o'clock and 270° (west) is at 9 o'clock.


This distinction may seem superfluous since in trigonometry an angle of 90° give the same results no matter the direction. However, the distinction between right- and left-hand coordination systems becomes extremely important for map reading (particularly when we get to reading structural information from a geologic map). To avoid confusion, a simple discussion of the distinctions between map angles and math angles is worthwhile before beginning an exercise in which students have to use structural information.

There are two ways that students may struggle with these distinct coordinate systems:

Acknowledging and recognizing differences (and similarities) between the two types of coordinate systems can make these ideas less intimidating to students.

Diagram illustrating the way that sediment moves along the beach with longshore transport. Details

Most students will be familiar with the right triangle definitions of these functions (sine, cosine and tangent are abbreviated sin, cos, and tan, respectively):

tan θ = opposite/adjacent where θ is the angle of interest; opposite, adjacent and hypotenuserepresent sides of the triangle. See figure at right for illustration of right triangle geometry.


This is probably the most common way that trigonometry is used in introductory geology; for example, the use of angles in seismic and ocean wave refraction or slope stability. In geoscience classes, students are often asked to rearrange and solve these equations using vectors.

Model to illustrate angle of repose. Click to enlarge. Details
A great way to help students to understand the concept of angles is to give them a physical representation of the angle itself. A simple model using a board with a hinge (or even just something to prop it up at an angle) can be constructed to illustrate topics such as angle of repose or strike and dip. In this way, students can physically measure angles and can visualize what the mathematics mean in physical reality.

To expand on the physical model and include some mathematical calculations, trigonometry could be added to an exercise on angle of repose using the mass of an object placed on the board. Trigonometry can be used to calculate the normal force and the shear force exerted on the object for a given angle.

Students have any number of technological tools that they can use to better understand quantitative concepts -- from the calculators in their backpacks to the computers in their dorm rooms. Students can make use of these tools to understand both right triangle geometry and trigonometric functions.

Spreadsheet programs provide good ways to keep track of a large quantity of angular measurements and these can easily be converted from degrees to radians (or vice versa). Several of the activities in the activites collection make use of spreadsheets to reinforce trigonometric concepts. Calculations of trigonometric functions are also relatively easy with simple commands. However, one drawback to many spreadsheet programs is that they have neither formatting for angular measurements (degrees, minutes, seconds) nor the ability to plot data on polar diagrams. Students are likely to encounter spreadsheet programs in many of their classes and the graphing capablilties are excellent tools for visualizing the shape of an equation.

Work in groups to do multiple day, in-depth problems

Mathematicians also indicate that students learn quantitative concepts better when they work in groups and revisit a concept on more than one day. Therefore, when discussing quantitative concepts in entry-level geoscience courses, have students discuss or practice the concepts together. Also, make sure that you either include problems that may be extended over more than one class period or revisit the concept on numerous occasions.

Geoscience concepts reinforce trigonometric functions numerous times within one introductory course. Topics include angle of repose, wave refraction, the behavior of seismic waves in the Earth and measuring strike and dip. A detailed discussion is necessary when the concept is first introduced and some mathematical review will likely be necessary. However, when another topic related to trigonometry comes up, remind students of topics where the same mathematical skill is useful. Students are more likely to retain mathematical material when they see connections among topics.

Students use trigonometry to solve Snell's law for seismic wave refraction and determine the properties of the Earth's layers. In this activity, students consider the balance of forces on a hillslope using the Factor of Safety by calculating shear stress and shear strength for an example hillslope and formulating an expression for the factor of safety in an Excel spreadsheet. This activity includes several calculations using density to assess slope stability. An activity that uses a square mile to scale the inner planets of the solar system. Trigonometric functions figure prominently in the calculations using Excel.