There are 5 main concepts that our students struggle with when learning about population growth and the relationship of population to geological resource use: 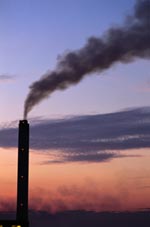 How many of these problems are the direct or indirect result of overpopulation? Would we have such a problem with the top three -- pollution, global warming and habitat -- if world population was not so large? Other than some of the natural disasters (and even those are arguable), most of these other environmental problems are due to overpopulation.

The characterization of overpopulation as the cause of many environmental problems may be an oversimplification. Consumption of natural resources also plays an important role in straining the environment. On a global scale, it is probably pretty intuitive to students that the presence of more people in the world causes a bigger strain on natural resources. What may not be intuitive is the concept of sustainability. What does sustainability mean?

Friends of the Earth define sustainability as "the simple principle of taking from the earth only what it can provide indefinitely, thus leaving future generations no less than we have access to ourselves." Many other organizations define it in differently; however, the crux of the definition is the same. Sustainability involves living within the limits of the resources of the Earth, understanding connections among economy, society, and environment, and equitable distribution of resources and opportunities.
It is the last part of the definition that joins population growth, particularly in developed countries, and resource use. Developed countries, in general, have and use more of the Earth's resources. Population growth in developed countries puts a greater strain on global resources and the environment than growth in less developed nations. For example, in 1997, the U.S. generated 27.5% of the world's total CO2 emissions; more than five times that of India (5% of the world's total), a country with 4-5 times the population of tht U.S (Texas A&M's LABB). In fact, the way of life in the United States, on average, requires approximately 5 times the resources available on Earth today (Earthday Network).

To emphasize the disparate effects of population and lifestyle in developed vs. undeveloped countries have your students complete the "Ecological Footprint quiz" from Earthday Network. This quiz shows the participants how many "Earths" would be needed if everyone lived the way that they do. It is likely that students in the United States will find that they need approximately 5 planets to sustain their lifestyles! It may surprise them to learn this. If you want to reinforce (or contrast) the impact of undeveloped nations on resources, have your students take the quiz for an undeveloped nation. You may wish to tell them the choices to make or you may want them to make decisions about how they think people in that country live. The results may shock them.

The above makes developed nations out to be the bad guys but that is not entirely true. Undeveloped countries with large (and growing) populations also put a strain on the local environment and the limited resources that they have. Countries that struggle to meet growing demands for food, fresh water, timber, fiber and fuel can alter the fragile ecosystems in their area, putting a great strain on the limited resources that they have to draw from (ICTSD.org).

Where: The equation above is a differential equation and may not be appropriate for some introductory courses -

where: A plot of this equation looks something like the plot on the right. Population grows exponentially - if the rate of natural increase (r) doesn't change. The variable r is controlled by human behavior as described below.

Essential to understanding the mathematics of population growth is the concept of doubling time. Doubling time is the time it takes for population to double and it is related to the rate of growth. When the population doubles, N = 2N0. Thus the equation becomes


There are many more variables that can affect change in the population and its growth - have your students brainstorm about other factors that affect the rate and prediction of population growth.

UNESCO and World Bank have a website with a number of learning modules on population related topics.

Wide open spaces can be hard to find 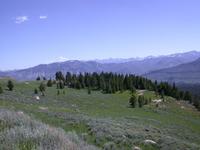 and may not comprehend that other places in the world are far more crowded than where they live. To give them a sense of perspective, I try to give them a sense of what it is like to live in other places. For example, I tell them that in Winnebago county (the county UW-Oshkosh is situated) has a population density of 138 people/km2. On the other hand, in 1990, Kowloon (a walled part of Hong Kong) had a population density 1,924,563 people/km2 (demographia.com)! Other places of interest include: Bombay (Mumbai), India, with 39,860 people/km2 , Manhattan (New York City), United States, with 25,849 people/km2, London, England, with 4,700 people/km2 and Sydney, Australia, with about 2,500 people/km2 (wikipedia.com). Estimates of population density by city vary considerably but the general idea is that most small cities in the U.S. are not very densely populated.
I also use a story about a friend of mine who moved from China to the U.S. about 5 years ago. My friend Gong Yan moved to Atlanta from Wuhan, China, where he grew up and went to university. When he got to Atlanta, he was very uncomfortable because he felt there was so much open space. 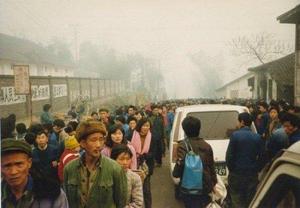 In Wuhan, when he was in a public place, he was always surrounded by people - people bumping into him, people talking to him, people streaming along the street. He would often go to a mall in Atlanta just to be around people. In contrast, many Americans become uncomfortable when in large crowds. A friend of mine traveled to Japan and tells a story of standing in line at the airport with the Japanese gentleman behind her pushing her with her body while she strained not to touch the person in front of her in line. Culturally, we deal with population density problems by changing our concept of "personal space". In many parts of the U.S., we have the luxury of significant amounts of personal space; other developing and highly urban places do not.