"Diseases of Affluence": Not Just for the Affluent

A second major issue facing modern food systems are chronic diet-related diseases that result from calorie overconsumption, often linked to increasing rates of obesity in societies around the world. The major chronic conditions related to calorie overconsumption are heart disease and type II or "old-age" (later onset) diabetes (see Fig. 3.2.1 for a global map of diabetes incidence). These have been called "diseases of affluence" because they tend to increase in prevalence as countries increase in material wealth, with a combined increase in meat and calorie availability along with more sedentary jobs and lifestyles. 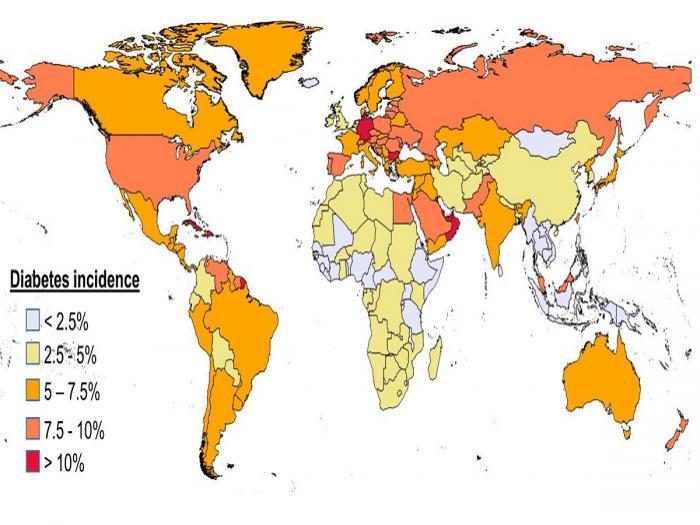 ×
Figure 3.2.1. Percent of the population affected by diabetes by country, including Type II or old-age onset diabetes. Note that diabetes is more common in middle and high-income countries. It is, however, increasing in developing countries as diets change with increasing incomes and urbanization.
Credit: Steven Vanek, based on data in Millstone and Lang 2013, The Atlas of Food.

The dominant role of the globalized, corporate food system in these societies (see module 10.1 for the typology of food systems) means that processed foods (e.g. mass-produced "non-food" snacks and sweetened beverages, prepared frozen meals, fast food, pasta) occupy a larger and large part of the diet of typical consumers in these societies. To save cost and maintain demand, processed fats, sugar, and salt, are used as low-cost ingredients in these foods (e.g. corn syrup, oil by-product from the cattle and cotton industries) As has been described by food writers such as Michael Pollan, the prevalence of these diet choices means that consumers eat a large proportion of "empty calories" without fiber, high-quality fats, sufficient vitamins, and minerals, or in some cases adequate protein. Although high-calorie and fatty restaurant foods have been common for generations, at a whole food system level the prevalence of these foods, and the way they have been normalized in such concepts as "the American diet" (which upwardly mobile consumers in many other countries aspire to) are of great concern because they provide a dominant range of food choices that are not consistent with human health.& This is especially so as consumers become more urban and many (though not all) expend fewer calories in manual labor related to farming. The increased prevalence of calorie excess has produced increasing rates of obesity in North America and Europe. (Fig. 3.2.2 below) 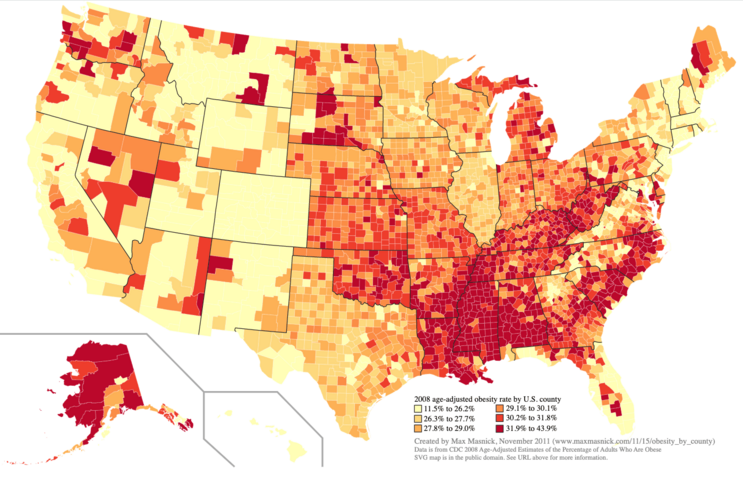 ×
Figure 3.2.2. The prevalence of obesity in the United States at the county level.
Credit: Max Masnick based on U.S. Centers for Disease Control data, 2008. Used with permission as a public-domain image.

The "double burden": chronic diseases in poor economies: Moreover, the term "diseases of affluence" is misleading because it is, in fact, poor people in industrialized countries as well as the developing world that face the greatest impact of these diseases. Empty calories are often very cheap calories for poorer sectors around the world, so that consumption of processed or dominantly carbohydrate diets with insufficient whole grains, fruits, and vegetables is more common among the poor. In addition, poorer households often are less able to pay for the expensive consequences of these diseases in the middle-aged and elderly (e.g. insulin provision for diabetics, the consequences of heart attack and stroke in the elderly). Ironically the same poorer sectors in poorer parts of the world and even within the United States can simultaneously face the issues of "traditional malnutrition" (i.e undernutrition, insufficient consumption of vitamins, iron, zinc, calories), especially among children and women, as well as diseases of overconsumption of empty calories. This ironic pairing of food system dysfunction has been called the "double burden" on developing countries by food policy experts. It also acts, at a national level, to reduce the overall income of a country by impairing the productivity of its human population (Figure 3.2.3, below). 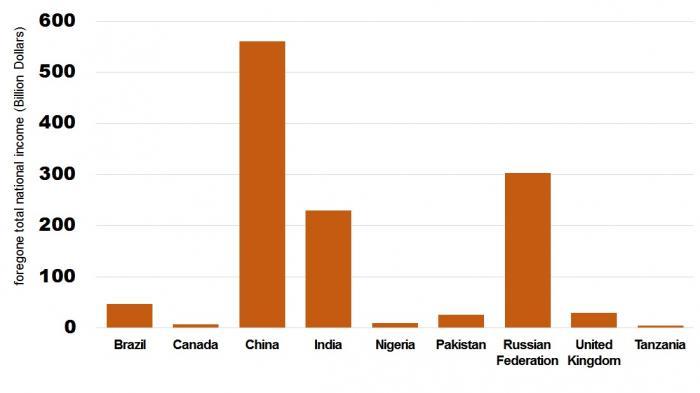 ×
Figure 3.2.3. The economic impact of chronic diseases around the world estimated as the total income sacrificed by different countries between 2005 and 2015 to impaired productivity and costs to populations and government from chronic diseases like diabetes, heart disease, and conditions resulting from stroke.
Credit: Steven Vanek, adapted from data in World Health Organization (WHO), 2005, Rethinking "Diseases of Affluence": the Economic Impact of Chronic Disease

Food deserts: Within industrialized countries, food system analysts have noted that the marketing model of the globalized food system has focused on suburban supermarkets that are able to capture profits from middle and high-income consumers. This model is profitable for food distribution companies but has the effect of not adequately serving either inner-city poor populations and the rural poor, who face difficulties in physically getting to distant supermarkets. Fast food and high-priced, smaller food markets with a preponderance of processed and unhealthy foods are the only food options in many poorer parts of the United States and other industrialized countries. These areas of low food access for healthy, reasonably priced foods are called food deserts. You will explore these more with a mapping tool in the summative assessment for this module.

For more information on the "double burden" around the world, you can read the online resource from the World Health Organization, " The Economic Impact of Chronic Diseases "