The second period of our rapid historical survey encompasses independent states, societies based on small groups, world trade, and global colonial empires and covers roughly 5,000 years between 3,000 BP and 1800/1900 CE. Both positive and negative environmental and social impacts were associated with this period. We can use the coupled system model to illustrate two examples of this period's characteristic forms of environment-society interactions. The Inca Empire in the Andes Mountains of western South America (from present-day Colombia to Argentina) offers a good example of an independent state with pronounced environmental and social impacts of its agriculture. Ruling from approximately 1400-1532 the Inca state oversaw the building and maintenance of extensive agricultural field terraces and irrigation canals (Figure 2.2.1). These terraces and canals produced sustainable landscapes in the tropical mountain environments of the Andes. 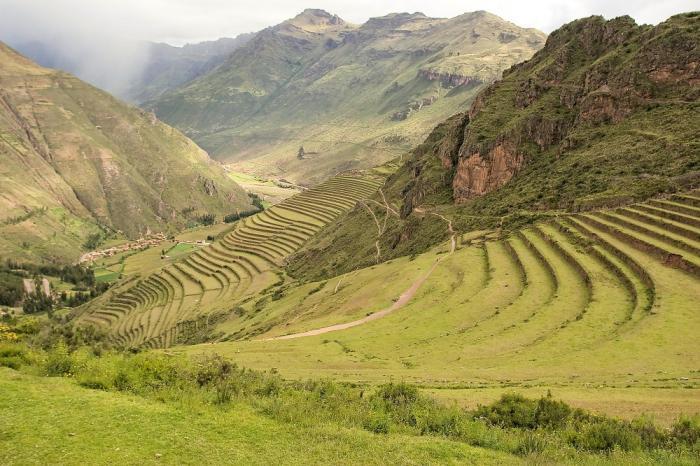 From the perspective of coupled natural-human systems (CNHS), the terraces and canals of the Inca produced sought-after foods and symbolized Inca imperial power, thus contributing further to Inca capacity to extend these sustainability-enhancing earthworks. The Inca state eventually established terraces and other large-scale agricultural and food transportation works (storage facilities, improved riverbank fields, roads, and bridges) that extended over much of the area of their empire. Environmental impacts of these terraces and other earthworks were beneficial since they stabilized mountain agricultural environments and enabled higher levels of food-growing per unit land area without major damage. Still, we need to remind ourselves that early independent states, such as the Inca, also created environmental problems and often were marked by large social inequalities between rulers and commoners. In other words, just as today, the environment-food systems of non-European peoples could and did attain high levels of sophistication while, at the same time, they were often wracked by significant issues with both environmental and social sustainability (see module 1 for definitions from the "three-legged stool" of sustainability. Similarly important for us to note is that some Inca terraces and canals continue to exist and are still used today as they are in Peru so that they still create a sustainable contribution to food systems at a local scale.

A second example of environmental and social impacts resulting from this period of agricultural diffusion and trade in world history comes from the world trade system established by global colonial empires involving major European powers between 1400 and 1800 (such as the Spanish, British, and French colonial empires). A well-known example of social and environmental impacts from this time period is the exporting of crops and livestock, along with related elements of European environment-food systems, to many areas of the world by these empires. Examples included wheat, sugar cane, alfalfa, cattle, and sheep. These crops and livestock had not originated in Europe but had already diffused there during earlier history, and were common in Europe at the time these empires were expanding. These components of new European colonial environment-food systems were mutually reinforcing, since for example the forage crop alfalfa and introduced European grasses were highly conducive to expanding the raising of cattle and sheep and making new sources of animal food products available to human populations. There were thus reinforcing (positive) feedbacks between the way that these crop species such as alfalfa and grasses were able to "remake" environments and make them more hospitable for European livestock. Sugar cane is another crop that is notorious for remaking the landscapes and social relations in the Carribean, South America, and the United States, through plantation agriculture and slavery. The case of pasture species and livestock is considered further in this module's summative assessment.