The third major period in our broad historical summary is modern industrial agriculture, which is the predominant environment-food system today, though it coexists with a significant sector of smallholder agriculture that has incorporated modern industrial techniques to a greater and lesser extent.

Modern agriculture arose in the 1800s and 1900s through a variety of developments in agriculture and in the processing and business of foods. "Industrial" in this description refers to the major role of factory-type processes that are principally large-scale and involve the defining role of technological inputs such as large amounts of freshwater use, chemical fertilizer, pesticides, and "improved" seed that delivers high-yield responses to the other inputs. Industrial is also an appropriate term since this environment-food system has narrowed concentration on a few species of crops and livestock. "Modern" is important in this description since distinct foodways and consumption practices---many based on foods that are highly processed, relatively inexpensive, easy-to-prepare convenience items---that are integral to this environment-food system. Modern is also an important term since it's estimated this predominant system is based on more changes in the past 100 years than occurred over several hundred and maybe even thousands of years previously.

In much of the world, the advent of the modern environment-food system was provided through the Green Revolution beginning in the 1940s and 1950s. The Green Revolution used science and technology to develop modern crops and agricultural production systems for the countries of Asia, Africa, and Latin America. While it has evolved considerably, the approach of the Green Revolution continues to be used today. The worldwide influence of the Green Revolution suggests one additional term to describe this type of environment-food system, which is "global." The development of this system, as well as its inputs and impacts, is global in scope. The global characteristics of today's predominant environment-food system will be evident throughout this module and the others in this course as we place emphasis on the global scale of environmental and social impacts, which relates to the concept of the Anthropocene. In fact, if we consider the bar graphs of the relative areas of wild versus managed land (crops and livestock) globally presented in module 1 (Figure 1.1.4) we can see why some experts prefer to think of modern industrial agriculture, and the related expansion of human populations, as the defining period of the Anthropocene. 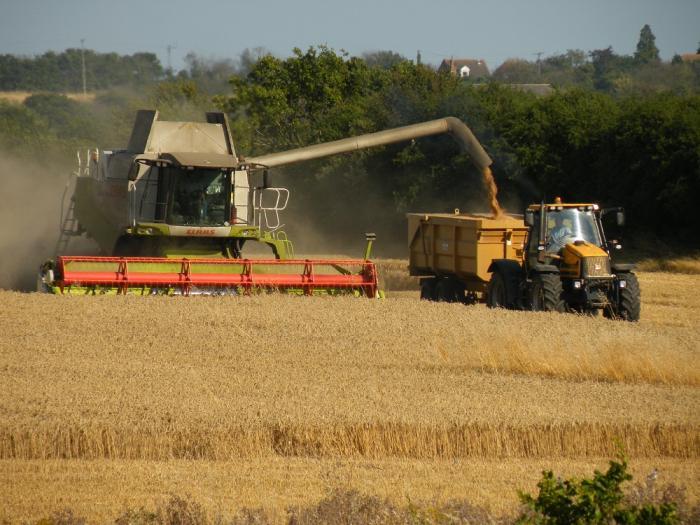 ×
Figure 2.2.2. Modern industrial agriculture is a culmination of social and technological processes beginning in the 1800s that sought to increase yields of agriculture for growing human populations by applying fossil fuel energy, mechanization, and advanced crop breeding methods. This photo of a modern grain variety being harvested encapsulates this transformation towards modern agriculture in many ways: the large area of a single grain variety, likely bred and sold by a modern corporation; the extreme mechanical efficiency and speed of grain flowing off the field into a wagon for storage and sales; the need for diesel fuel and associated carbon dioxide emissions to drive the powerful machinery, whose power and efficiency reduces the workforce needed for agriculture.
Credit: Alan Harrison, used with permission from Flickr under a creative commons license

A wide range and mix of environmental and social impacts are associated with modern industrial agriculture. Agricultural mechanization has coincided with a major reduction in the agricultural workforce. In the United States, for example, less than 2% of the population is estimated to be directly employed in agriculture. In the 1870s and 1880s, by contrast, this estimate was 60-80% of the U.S. population. Environmental impacts and human-environment interactions have also been strongly influenced by the widespread use of fossil fuels in modern industrial agriculture.

Fossil fuel use is the foundation for many modern agricultural technologies ranging from tractors and farm machinery (Fig. 2.2.2) to fertilizers and pesticides as well as the energy costs of processing and the large number of "food miles" typically involved in transportation. As the result, energy issues along with greenhouse gas emissions have become a major concern with modern industrial agriculture----as discussed in subsequent modules.

One example of human-environment interaction will suffice in this section since modern industrial agriculture will be examined in detail in many of the modules that follow. (Modules 6, 7, and 8, which focus on agroecology, feature excellent and far more extensive examples.) The widespread use of pesticides and the creation of pesticide-dependent crops and cropping systems are a defining characteristic of this agriculture worldwide. The development of these synthetic products for protecting crops, and potentially the increase in yields associated with solving, if temporarily, a pest problem. Meanwhile, the populations of agricultural pests continue to evolve resistance in response to these applications, an example considered further in module 8. As a result, it is essential these modern industrial crops and cropping systems (including the use of pesticides) be constantly developed in order to gain a new advantage against the most recently evolved pests.create crops and systems that depend further on synthetic pesticides. This innovation process in agricultural technology for crops is another example of a positive feedback driving the further industrialization of agriculture.