The Coupled Natural-Human Systems, which we introduced in Module one, can be used as a framework to explain domestication events and early agriculture in the history of food systems. This framework is sometimes used to think about the "why" question of domestication, for example, "why did human and natural systems come together at a particular time in different parts of the world, including the middle east, so that plants were domesticated and agriculture started?; Why not earlier, and why not later?". The framework can also be used to explore the history of food systems after domestication, which is the subject of module 2.2.

You probably recall from module 1.2 that systems are assemblages of components and the relations between them. Two basic relations that can occur within systems, and that you likely included in your concept map of a food system example (summative evaluation 1.2) were those of a driver and a feedback relation. As you may already suspect, drivers are those processes or changes that can be said to impel or cause changes in other parts of a system, somewhat like a volume knob that causes the volume of music to increase in a room. In the example of the Pleistocene overkill hypothesis from module 2.1, for example, human hunting is thought of (hypothesized) as a dominant human system driver that eliminates the possibility of hunter-gatherers to easily find food, so that they may have been forced to develop early forms of agriculture. Excessive hunting is the driver, and collapsing prey animal populations, and eventually, domestication are responses. Meanwhile, feedback processes are those that can be said to be self-strengthening or self-damping (see module 1.2), and in the case of domestication, also may involve multi-driver processes where a response to a driver is another process that serves to strengthen both processes (positive feedback) or diminish the change (negative feedback). For example, as you will see in the next module, a common dynamic around the emergence of agriculture could be the coming together of excessive hunting, changing climate with worsening conditions for both wild game and crops, and the expansion of human settlements that may have also degraded the land. This combination of human and natural drivers could all tend to drive increased areas under cultivation to deal with the lack of food from hunting, and later the lack of food from soil degradation. A positive feedback emerges when the expansion of agriculture itself begins to change the climate, further eliminate prey, or reduce food availability from soil degradation. These processes would be thus said to interact as a positive feedback on domestication and the emergence and continuing expansion of agriculture. The diagram below (fig. 2.1.3) shows these potential drivers and feedback processes. the basic-level illustration shows the coupling of these two systems. 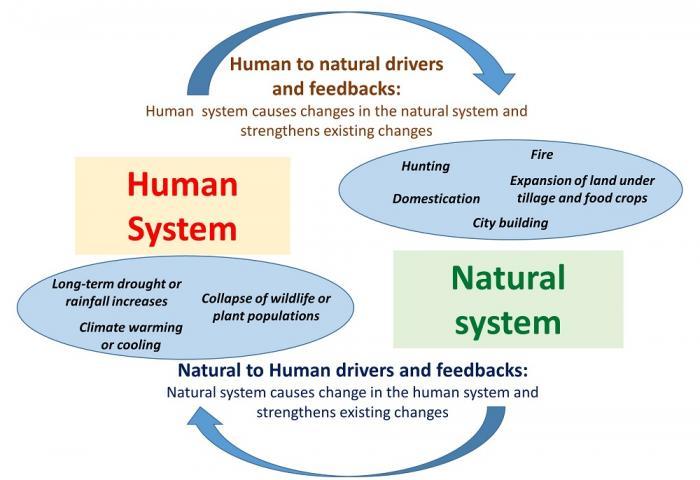 ×
Figure 2.1.3 General Diagram of Coupled Natural-Human Systems (CNHS) illustrating potential drivers and feedback processes from human to natural systems and from natural to human systems (blue ovals show examples of these processes). It is understood from module 1 that the human and natural systems themselves consist of multiple social and environmental components, but are represented as solid blocks here for simplicity.
Credit: adapted by Karl Zimmerer and Steven Vanek from a diagram designed by the National Science Foundation Coupled Natural Human Systems Program

In Figure 2.1.3, then, the human factors that can change the environment we will refer to as "Human Drivers" or "Human Responses" of the CNHS model. The environmental factors that influence humans are referred to as "Environmental Drivers" or "Environmental Feedbacks." As illustrated below with examples, the CNHS model describes the combined, interlocked changes of human behaviors and societies, on the one hand, and environmental systems including the plants and animals under domestication, on the other hand. This model is also referred to as a coevolutionary model since the drivers and feedbacks, including intentional and unintentional changes, influence subsequent states and the resulting development of the human-environment food system.

An initial, specific example: Why did agriculture emerge at the end of the ice age?

Before using these diagrams in Module 2.2 to explain the history of food systems (including the summative assessment which asks you to diagram some of these relationships yourselves), we'll illustrate the concept of drivers, feedbacks, and the coevolutionary emergence of food systems using a very specific diagram about the emergence of agriculture in Fig. 2. 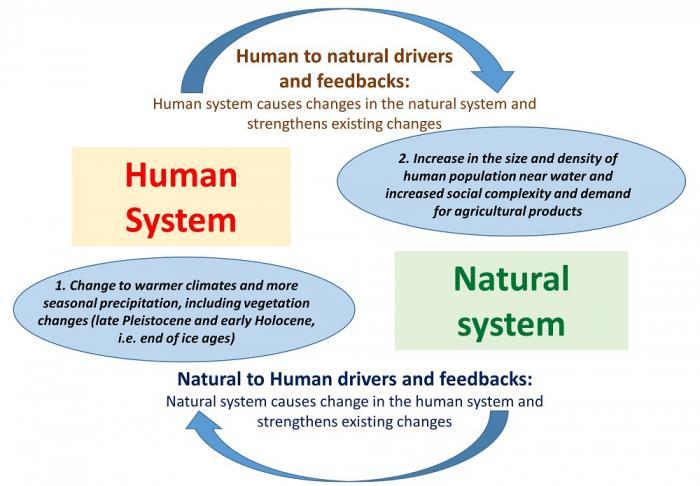 ×
Figure 2.1.4 Specific example of a coupled human natural system in a transition from hunting and gathering to domestication and early agriculture, showing what are thought to be a dominant driver (climate change) and a human response that created positive feedbacks in strengthening the transition to agriculture (densification and social organization of human settlements near water sources)
Credit: National Science Foundation Coupled Natural Human Systems Program

The "story" of this diagram is as follows: First, climate change is one of the main environmental drivers that influenced early agriculture and domestication. At the end of the Pleistocene, the geologic epoch that ended with the last Ice Age, there was a worldwide shift toward warmer, drier, and less predictable climates relative to the preceding glacial period (Fig. 2.1.4, oval (1)). This climate shift that began in the Late Pleistocene resulted from entirely natural factors. Hunter-gatherer populations are documented to have been significantly influenced by this climate change. For example, many hunter-gatherer populations responded to this climate change by increasing the size and density of human populations near water sources such as river channels and oases (Figure 2.1.4, oval (2)). This climate change also led to the evolution of larger seed size within plants themselves (especially those plants known as annuals that grow each year from seed), which are summarized as part of the vegetation changes noted in Fig. 2.1.4. It may have also selected for annual plants being more apparent parts of natural environments in dry climates these humans inhabited, since surviving only one season as an annual plant, and setting seed that survives a dry period is one evolutionary response in plants to dry climates (see module 6 for the concept of annual and perennial life cycles). The driving factor of climate change thus led to responses in plants and human societies that are hypothesized to have acted as drivers for domestication and early agriculture. The driver of climate change is also thought to have concentrated the populations of the ancestors of domesticated animals. Their concentrated populations would have better-enabled humans to take the first steps toward animal domestication. Recognizing the importance of climate change we single it out as the main driver in Figure 2.1.4, though doubtless there were other interacting drivers.

Influential Human Drivers included such factors as population (demographic) pressure and socioeconomic demands for food and organization of food distribution were also highly important in contributing to the domestication of plants and animals and the rise of early agriculture (Figure 2.1.4, oval (2)). This pair of factors is also referred to as human to natural drivers, as shown in the diagram. The influence of human demographic pressure was felt through the fact that settlements were becoming more permanently established and densely populated toward the end of the Pleistocene. People in these settlements would have been inclined to bring wild plants with good harvest and eating qualities into closer proximity, and thus take the first steps toward agriculture.

Socioeconomic factors are also considered important as Human Drivers in early agriculture and domestication. As hunter-gatherer groups became more permanently settled in the Late Pleistocene they evolved into more socially and economically complex groups. Socioeconomic complexity is generally associated with the demands for more agricultural production in order to support a non-agricultural segment of the population as well as for the use of the ruling groups within these societies. The emergence of this social organization, and higher population density, combined with the ability to feed larger populations with newly domesticated grains, are plausible as a powerful positive feedback that served to continue and strengthen the course of domestication and agriculture. Continued climate change associated with the expansion of farmed areas, and potentially soil degradation from farming that necessitated even larger land areas and/or more productive domesticated crops (see module 5), would have been additional feedback forces that strengthened the emergence of agriculture. Therefore, drivers and feedbacks are one way to answer the "when and why" questions around the start of agriculture, as a coevolution of human society with changing climate and vegetation. The concepts of drivers, feedbacks and coevolution will be further explored in module 2.2, to explain other stages and transitions in the history of food systems.