Skip to Main ContentSkip to Navigation
Your Account
InTeGrate Modules and Courses >Future of Food > Student Materials > Module 2: Geographic and Historical Context > Module 2.1: Origin of Farming as Coevolution and Coupled Human-Nature Interactions > The Nature and Timing of Agricultural Domestication: Global Patterns
InTeGrate's Earth-focused Modules and Courses for the Undergraduate Classroom

The Nature and Timing of Agricultural Domestication: Global Patterns

The origins of agriculture as the predominant mode of food production was dependent on the domestication of plants and animals. Domestication refers to the evolution of plants and animals into types that humans cultivate or raise; conversely domesticated types can no longer exist in the wild. Domestication, and the social and environmental transformation that accompanied them are closely related to the Anthropocene and represent one of the most pivotal experiences ever, both of earth's environments and in our history and evolution as a species. Domestication has been and is widely studied by interdisciplinary environmental and agricultural fields as well as various disciplines such as archaeology, biology, geography, genetics, and agronomy.

A couple of common definitions of domestication will help to underscore the importance of this concept. In a 1995 book on The Emergence of Agriculture, the archaeologist Bruce Smith defines domestication as "the human creation of a new form of plant or animal---one that is definitely different from its wild relatives and extant wild relatives". In 2002 in the scientific journal Nature the geographer Jared Diamond writes that an animal or plant domesticate is "bred in captivity [or in a field] and thereby modified from its wild ancestors in ways making it more valuable to humans its reproduction and food supply [nutrients in the case of plant domesticates]" (page 700). In other words, plant and animal domesticates have lost most or all the capacity to reproduce long-term populations in the wild---thus making domesticated populations of plants or animals different than ones that have been simply tamed or brought into cultivation on a one-time basis as single organisms. Expanding beyond these definitions, you can read more about domestication at National Geographic: domestication. 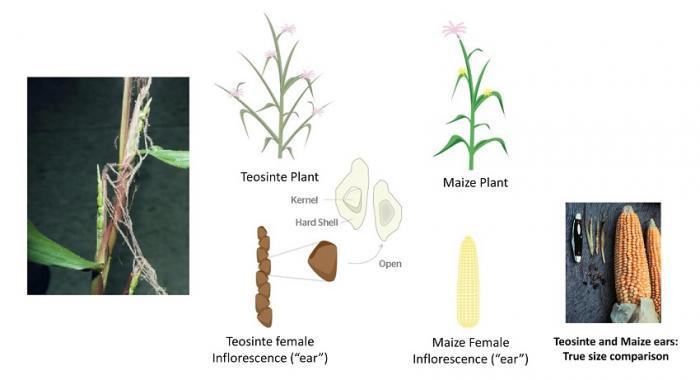 ×
Figure 2.1.1. Image showing grains and ears of the wild ancestor of maize, teosinte, domesticated in the area of present-day Mexico about 6000 years ago, and a comparison of the plant and seedstalk of teosinte (center) and modern maize (right). Note the relatively large seeds of teosinte that may have called attention to early plant domesticators as a useful species for a staple food, and the true size comparison of the two ears at far right that shows the dramatic increase in size accomplished through domestication and breeding. Photo credits: teosinte photo, Matt Lavin; teosinte/maize comparison diagram, Biosciences for farming in Africa initiative.
Credit: Used with permission from Flickr via a creative commons license.

A great deal is now known about the nature of domestication and its timing, in addition to the place of origin of many domesticated crops and animals (covered on the next page). Illustrating the multiple disciplines needed to understand the history of food systems, this information owes to evidence and analysis in archaeology; biology, ecology, and agronomy; geography; anthropology; and genetics. For one, the domesticates in general and our most important domesticated crops and animals in particular---such as wheat, rice, corn (maize), barley, potatoes, sorghum, cattle, pigs, and sheep---are recognized to have evolved from wild plants and animals that were selected, gathered, and brought back to camp by hunter-gatherers. Second, while a broad spectrum of wild plant and animal foods were being gathered and hunted prior to domestication the origins of agriculture represented a bottleneck. The effect of this bottleneck was that the number of major domesticates that became available to humans numbered in the several dozens, but not the thousands. Third, well-established demonstration of the actual dates of domestication varied from 8,000 - 10,000 years ago in the Near East (the Fertile Crescent of present-day Iraq, Turkey, Iran, and Syria) and China to the broad window of 4,000-8,000 years ago in several of the other world regions discussed next.

Domestication of plants and animals has been framed by many experts in terms of a " domestication syndrome" which refers to a set of traits or "syndrome" that are common to domesticates. Syndrome traits are ones that should be easy to remember because these traits confer usefulness to humans. In plants, for example, wild relatives may have shattering seed pods, where a seed is dropped on the ground as it ripens, while domesticates generally keep their seed on the plant to give humans greater convenience in harvesting. There are also dramatic increases in seed and inflorescence size in many plant domesticates in relation to wild relatives (e.g.. Fig. 2.1.1), as well as decreases in bitter or toxic substances that make food crops generally more appealing and nutritious to humans (and sometimes to wild herbivores as well, which then become pests!). Plant domesticates are generally less sensitive to day length as a requirement for flowering and reproduction, which means they complete their life cycles and produce grain and other products in a more predictable way for humans, and tend to have greater vigor as seedlings than wild relatives, which also follows from their larger seeds. In animals, the greater docility of animal pets and livestock, and traits such as floppy ears and general juvenile-type behavior of domesticated dogs are oft-cited examples of domestication syndrome. See if you can identify examples of these traits in the website presentation of domestication cited in the text above.