Based on materials from Kirsten Menking (Vassar College)

In this unit, students develop a computational model that replicates the Daisyworld model from the published literature. This is simple climate system model that focuses on the effect of albedo on temperature.

Using Mathematics and Computational Thinking: Use simple limit cases to test mathematical expressions, computer programs, algorithms, or simulations of a process or system to see if a model “makes sense” by comparing the outcomes with what is known about the real world. HS-P5.4:

Using Mathematics and Computational Thinking: Create and/or revise a computational model or simulation of a phenomenon, designed device, process, or system. HS-P5.1:

Obtaining, Evaluating, and Communicating Information: Critically read scientific literature adapted for classroom use to determine the central ideas or conclusions and/or to obtain scientific and/or technical information to summarize complex evidence, concepts, processes, or information presented in a text by paraphrasing them in simpler but still accurate terms. HS-P8.1:

Developing and Using Models: Develop a complex model that allows for manipulation and testing of a proposed process or system. HS-P2.5:

Weather and Climate: The foundation for Earth’s global climate systems is the electromagnetic radiation from the sun, as well as its reflection, absorption, storage, and redistribution among the atmosphere, ocean, and land systems, and this energy’s re-radiation into space. HS-ESS2.D1:

Earth's Systems: Use a model to describe how variations in the flow of energy into and out of Earth’s systems result in changes in climate. HS-ESS2-4: 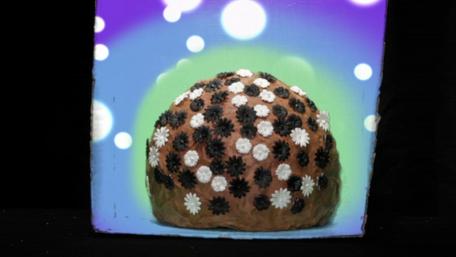 ×
A clay model of Daisyworld.

Provenance: This is a movie still from a short film about Daisyworld made by NASA and the Goddard Space Flight Center. The movie (and still) can be downloaded from http://svs.gsfc.nasa.gov/cgi-bin/details.cgi?aid=10898.
Reuse: This item is offered under a Creative Commons Attribution-NonCommercial-ShareAlike license http://creativecommons.org/licenses/by-nc-sa/3.0/ You may reuse this item for non-commercial purposes as long as you provide attribution and offer any derivative works under a similar license.
Students explore Daisyworld, a model of a self-regulating system incorporating positive and negative feedbacks. Daisyworld is a planet on which black and white daisies are the only things growing. The model explores the effect of a steadily increasing solar luminosity on the daisy populations and the resulting planetary temperature. The growth function for the daisies allows them to modulate the planet's temperature for many years, warming it early on as radiation-absorbing black daisies grow, and cooling it later as reflective white daisies grow. Eventually, the solar luminosity increases beyond the daisies' capability to modulate the temperature and they die out, leading to a rapid rise in the planetary temperature. Daisyworld was conceived of by Andrew Watson and James Lovelock to illustrate how life might have been partly responsible for regulating Earth's temperature as the sun's luminosity increased over time. This exercise guides students through some of the mathematics behind the modeling and uses the modeling program STELLA to visualize results.
Used this activity? Share your experiences and modifications

This exercise addresses several of the guiding principles of the InTeGrate program. In particular, it requires the use of systems thinking, develops students' abilities to use numerical modeling to generate and test geoscientific hypotheses, develops understanding of positive and negative feedbacks, and explores two major ideas in Earth Science/History, the Faint Young Sun paradox and the Gaia Hypothesis.

This unit is intended to be used in a three- to four-hour class period that meets once a week. It can be used as part of this modeling course or it can be adapted as a lab exercise for courses in environmental science. For this course, students should come to class prepared to take a short quiz on the assigned reading. Thereafter they will be led through a series of prompts designed to help them create and experiment with a number of simple models using the iconographic box modeling software STELLA (see https://www.iseesystems.com/store/products/ for different options for purchasing student or computer lab licenses of STELLA or for downloading a trial version). Students should have access to Microsoft Excel or similar spreadsheet software to allow them to graph the growth functions early in the lab.

For those learning to use STELLA, we suggest the online "play-along" tutorials from isee systems. You can find them here: isee Systems Tutorials .

In addition to the Watson and Lovelock paper, students should complete the Unit 4 Student Reading, which contains extra background information as well as some explanation of some of the mathematics involved.

can be found here. In class, students should be provided with a copy of the Daisyworld exercise (Microsoft Word 2007 (.docx) 36kB Nov30 16).

Instructors can download a version of the STELLA Dasiyworld model by clicking here: Documented Daisyworld Model (Stella Model (v10 .stmx) 29kB Aug11 16). The model was created using STELLA Professional and should open on any subsequent version of STELLA. If you are using an earlier version of STELLA, the complete model graphic and equations can be found in the answer key so that you can reconstruct the model yourself.

We generally post the readings and assignments for students to an LMS site (e.g. Moodle, Blackboard, Canvas). Students can open the assignment in Microsoft Word on the same computer they are using to construct the STELLA model and then answer the questions by typing directly into the document. Students can then either print a paper copy to hand in to the instructor or email their modified file to the instructor. It is very straightforward to copy graphs and model graphics out of STELLA and to paste them into Word. Simply select the items to be copied, hit copy in STELLA, and paste into Word. There is no need to export graphics to jpg.

A typical 4-hour class session might be broken up into the following sections:

For instructors who have more limited contact hours with their students, we suggest that the model construction parts of this exercise be assigned as a pre-lab to be handed in a day or two before class along with the completed STELLA model itself. This would allow the instructor to determine whether students' models are working correctly and to provide feedback to address errors in construction, omissions in documentation, problems with unit conversions, and inappropriately sized time steps that might lead to spurious model behavior. Class time could then be devoted to running experiments and analyzing the results. If access to STELLA outside of class time is impossible due to computer lab scheduling or to financial constraints that prevent students from purchasing their own STELLA licenses, students could be asked to create a pencil and paper sketch of what their model should look like, annotated with equations and then sent to the instructor in advance of class for feedback. This should facilitate a faster model construction time during the limited class hours.

The NASA Goddard Space Flight Center has created a short animated film describing Daisyworld that can be found at http://svs.gsfc.nasa.gov/vis/a010000/a010800/a010898/