In this unit, students develop a model based on the "tragedy of the commons." The model includes both economic components (maximizing profit) and environmental components (the amount of land needed per sheep). They use the model to test different scenarios of resource management.

Planning and Carrying Out Investigations: Plan an investigation or test a design individually and collaboratively to produce data to serve as the basis for evidence as part of building and revising models, supporting explanations for phenomena, or testing solutions to problems. Consider possible confounding variables or effects and evaluate the investigation’s design to ensure variables are controlled. HS-P3.1:

Systems and System Models: Models can be used to predict the behavior of a system, but these predictions have limited precision and reliability due to the assumptions and approximations inherent in models. HS-C4.4:

Earth and Human Activity: Create a computational simulation to illustrate the relationships among management of natural resources, the sustainability of human populations, and biodiversity. HS-ESS3-3: 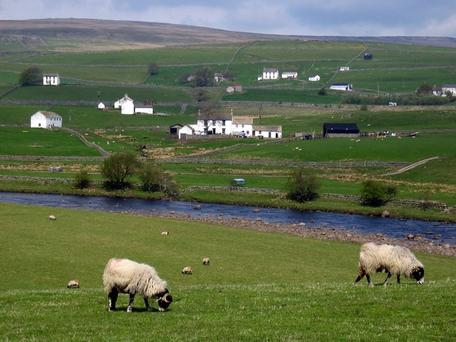 Provenance: Copyright Andrew Curtis
Reuse: The image is offered for reuse under a Creeative Commons Attribution-Share Alike License from http://www.geograph.org.uk/photo/1180015
suggested that, in the absence of any restrictions or incentives, rational people will tend to drastically overuse any common resource. In this exercise, students will explore a model of the most well-known example of the Tragedy of the Commons, that of sheep grazing on commonly owned land. The model is based on Hardin's assumption that without any rules, herders will continue to add sheep to the land since the benefits (in this case, profit from selling milk) accrue solely to the herder, while the costs (depleting the grass) are borne by everyone. While the models described below use the sheep grazing example throughout, there are many other "commons" in the modern environment, including the atmosphere with respect to the emission of carbon dioxide or air pollutants. Students will experiment with different mechanisms for regulating the commons, and will be introduced to the economic concept of discounting as it applies to comparing costs or benefits between two time periods.
Used this activity? Share your experiences and modifications

This exercise addresses several of the guiding principles of the InTeGrate program. In particular, it requires the use of systems thinking to address an interdisciplinary problem, develops students' abilities to use numerical modeling to generate and test hypotheses, specifically addresses long-term sustainability of human behavior, and addresses a grand challenge facing society, anthropogenic warming.

This unit is intended to be used in a three- to four-hour class period that meets once a week. It can be used as part of this modeling course or it can be adapted as a lab exercise for a course in Earth science or climate. For this module, students should come to class prepared to take a short quiz on the assigned reading. Thereafter they will be led through a series of prompts designed to help them create and experiment with a number of simple models using the iconographic box modeling software STELLA (see https://www.iseesystems.com/store/products/ for different options for purchasing student or computer lab licenses of STELLA or for downloading a trial version).

For those learning to use STELLA, we suggest the online "play-along" tutorials from isee systems. You can find them here: isee Systems Tutorials .

In addition to the Hardin paper, students should complete the Unit 10 Student Reading, which contains extra background information as well as some explanation of some of the mathematics involved.

Students should complete the Tragedy of the commons reading quiz (Microsoft Word 2007 (.docx) 50kB Aug11 16) before coming to class. The

can be found here. In class, students should be provided with a copy of the Tragedy of the commons exercise (Microsoft Word 2007 (.docx) 189kB Dec4 16) .

Instructors can download the STELLA tragedy of the commons models here:

The model was created using STELLA Professional and should open on any subsequent version of STELLA. If you are using an earlier version of STELLA, the complete model graphic and equations can be found in the answer key so that you can reconstruct the model yourself.

We generally post the readings and assignments for students to an LMS site (e.g. Moodle, Blackboard, Canvas). Students can open the assignment in Microsoft Word on the same computer they are using to construct the STELLA model and then answer the questions by typing directly into the document. Students can either print a paper copy to hand in to the instructor or email their modified file to the instructor. It is straightforward to copy graphs and model graphics out of STELLA and to paste them into Word. Simply select the items to be copied, hit copy in STELLA, and paste into Word. Alternatively, you can have students use screenshots. There is no need to export graphics to jpg.

A typical 4-hour class session might be broken up into the following sections:

More recent critiques and context: Basurto, Xavier and Elinor Ostrom, 2009, Beyond the Tragedy of the Commons.