These student materials complement the Modeling Earth Systems Instructor Materials. If you would like your students to have access to the student materials, we suggest you either point them at the Student Version which omits the framing pages with information designed for faculty (and this box). Or you can download these pages in several formats that you can include in your course website or local Learning Managment System. Learn more about using, modifying, and sharing InTeGrate teaching materials.

This week's project uses a model of a simple planet where only two organisms grow: black daisies and white daisies. Since the daisies have different albedos, they affect local radiative balance and therefore local (and average planetary) temperature differently. The lab explores concepts of feedbacks, homeostasis, thresholds, and the possibility that a single system may have multiple stable states, and it draws on concepts encountered in the population and climate modeling labs of the last two weeks. 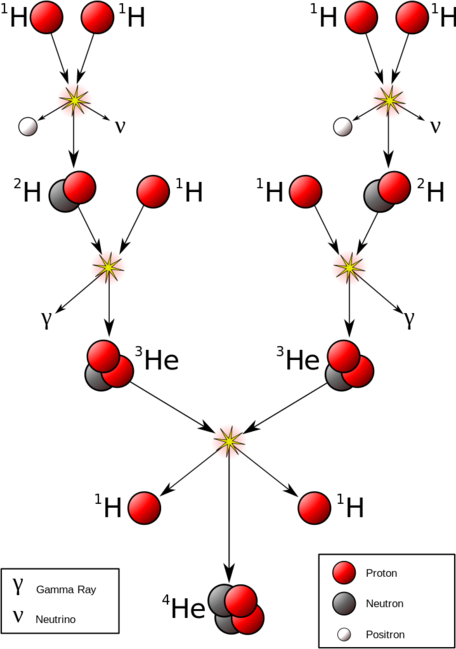 ×
Figure 1: Nuclear fusion in the sun converts hydrogen atoms into helium, releasing electromagnetic radiation that travels throughout the solar system and warms Earth.

Provenance: Produced by Borb under the CC license https://commons.wikimedia.org/wiki/File:FusionintheSun.svg
Reuse: This item is offered under a Creative Commons Attribution-NonCommercial-ShareAlike license http://creativecommons.org/licenses/by-nc-sa/3.0/ You may reuse this item for non-commercial purposes as long as you provide attribution and offer any derivative works under a similar license.
Our sun is a large ball of gas that produces energy through the nuclear fusion of four hydrogen nuclei (1H) into one helium nucleus (4H) (Fig. 1). Since four hydrogen nuclei take up more space than one helium nucleus, you might think that this would result in a gradual shrinking of the sun as the hydrogen fuel is consumed and pressure in the sun's core is reduced. However, models predict that the sun heats up as the amount of helium increases. This has two effects: it maintains a relatively constant pressure (and therefore size) of the sun, and it increases the amount of energy radiated from the surface of the sun. This is important because it implies that sunshine on early Earth (~4 billion years ago) would have been approximately 70% weaker than today. In 1972, Carl Sagan and George Mullen pointed out that a weaker sun is not compatible with what we know about early Earth from the geological record, at least not if concentrations of greenhouse gases such as carbon dioxide (CO2) and methane (CH4) were the same as today. Specifically, sedimentological evidence suggests the presence of liquid water by 3.8 billion years ago, and early life by 3.5 billion years ago, yet if the atmosphere contained the same concentrations of greenhouse gases as it does today, early Earth should have been completely frozen. The paradox, then, is how Earth came to have oceans and life with 30% less energy from the sun. The most commonly accepted answer is that the concentrations of CO2 and CH4 were in fact much higher than today, insulating our planet and preventing it from becoming a ball of ice. This leads to a second question though: once the sun got warmer, where did those greenhouse gases go, and how? 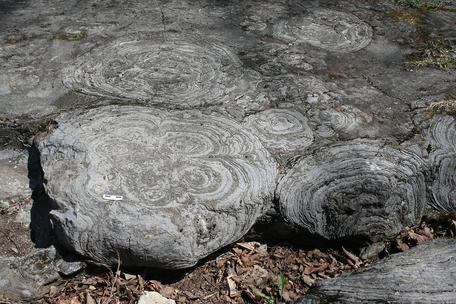 Provenance: Photo by Michael C. Rygel, https://commons.wikimedia.org/wiki/File:Stromatolites_hoyt_mcr1.JPG
Reuse: This item is offered under a Creative Commons Attribution-NonCommercial-ShareAlike license http://creativecommons.org/licenses/by-nc-sa/3.0/ You may reuse this item for non-commercial purposes as long as you provide attribution and offer any derivative works under a similar license.
In 1972 the British biologist James Lovelock first proposed what later became known as the "Gaia Hypothesis." The basic idea, subsequently co-developed with American biologist Lynn Margulis, is that in addition to responding to stresses exerted by their environment, organisms also play a role in shaping that environment. Specifically, Lovelock and Margulis point to the role of organisms in shaping and maintaining the stability of Earth's climate over long (billions of years) timescales. The two most commonly cited examples are the presence of oxygen in Earth's atmosphere and cycling of CO2 in and out of the atmosphere. Lovelock points out that photosynthetic bacteria (Fig. 2) modified Earth's Precambrian atmosphere, adding oxygen until it reached a relatively steady concentration that was conducive to more complex life. As Earth's atmosphere evolved further, Lovelock and Margulis argue that photosynthetic organisms may have played a role in removing CO2 as the sun was gradually heating up, resulting in a relatively stable climate despite the warming sun. This is an example of homeostasis, or a self-regulating process that tends toward internal stability, even in the face of external change.

Early iterations of the Gaia hypothesis attracted interest, but also criticism from those who did not believe that simple organisms could act with such an organized "purpose." In 1983, Lovelock teamed up with Andrew Watson to show that organisms need not "know" what they are doing, but still might modify the environment in a stabilizing way. To illustrate their point, Watson and Lovelock created a simple model of a fictional planet with two species—black and white daisies—whose albedos and temperature-sensitive growth rates modify planetary temperature (Fig. 3). 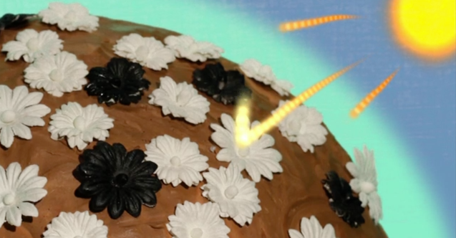 ×
Figure 3: Daisyworld, as envisioned by scientists at NASA's Goddard Space Flight Center. White daisies have a much higher albedo than black daisies, causing them to reflect more incoming solar energy.

Provenance: This image was clipped from a video made by NASA's Goddard Space Flight Center media group: https://svs.gsfc.nasa.gov/10898
Reuse: This item is offered under a Creative Commons Attribution-NonCommercial-ShareAlike license http://creativecommons.org/licenses/by-nc-sa/3.0/ You may reuse this item for non-commercial purposes as long as you provide attribution and offer any derivative works under a similar license.

The growth of daisies is governed by the expressions:

where aw and ab are the areas of ground covered by white and black daisies, x is the proportion of bare ground still available for colonization, ` beta ` is a growth function dependent on temperature, and ` gamma ` is a death rate. You may recognize these equations as being quite similar to those we used to model populations in week 2 of the class.

In equation 1 above, x can be determined from:

where p is set equal to 1. X and the areas of ground covered by the daisies are therefore fractional values lower than 1. The growth function ` beta ` is specified by:

where Ty is the temperature of the black or white daisies. Since the white and black daisies have different albedos, they have different temperatures, and for this reason, each color must have its own ` beta_y ` growth function.

Because of its parabolic shape, the growth function acts as both a positive and a negative feedback. Initially, as the planet warms due to the increasing luminosity of the sun, a small population of black daisies warms sufficiently to begin growing. As these daisies grow, their presence further warms the planet due to their low albedo, leading to still more growth in a positive feedback loop. Due to the parabolic shape of the growth function, however, continued growth of black daisies slows as temperatures become too warm for them. Eventually, temperatures are warm enough to allow the white daisies to begin to grow despite their high albedos. Their growth acts as a negative feedback. The more these daisies grow, the more they act to cool the warming planet.

where S is the solar constant (917 W/m2), L is a function that ramps up the solar output over time, A is the planetary albedo, ` sigma ` is the Stefan-Boltzmann constant (5.67e-8 W/m2K4), and Td is the temperature of Daisyworld. This is simply a rearranging of one of our basic energy balance equations from last week.

The planetary albedo is derived by taking the weighted average of the albedos of the black and white daisies and of bare ground (Aw, Ab, and Ag are albedos; aw, ab, and x are fractional areas covered by daisies or bare ground):

Watson and Lovelock determine the local temperature (Ty) of bare ground, white or black daisies from the expression:

where q is a positive constant described below. To show that using this equation for local temperature is valid in terms of the overall energy balance for the planet, they perform the following calculations:

The total energy radiated by Daisyworld to outerspace (F) is equivalent to the sum of the energies radiated from each type of ground cover (i.e., bare ground, black daisies, or white daisies):

substituting equation 6 above into equation 7 gives:

In this equation, `sigma`, q, A, and Td are all constants that can be pulled out of the summations to give:

because the sum of all of the areas on the planet is 1, and

because the planetary albedo, A, is equal to the area-weighted average albedo of the black and white daisies and of bare ground, so

Since the final value for F is equivalent to SL*(1-A), the planet can be seen to be in radiative balance using equation 6 for local temperature.

To understand the meaning of the q constant, Watson and Lovelock eliminate the planetary albedo term between equations 4 and 6:

so, setting these 2 equations equal,

Multiplying both sides by q gives:

In the case where q = 0, the planet is a perfect conductor of absorbed radiation. In other words, excess energy absorbed in areas covered by black daisies is conducted away to areas covered by white daisies to create a planet with a perfectly uniform distribution of surface energy.

Plugging q = 0 into equation 8 above gives

If on the other hand ` q = (SL)/sigma `, then there is no heat transfer between the different daisy species or the ground. Plugging this into equation 8 gives:

the latter half of this equation goes to 0, to give:

So in this situation, the local temperatures are determined by the local radiation balance.

Watson and Lovelock use a value intermediate between 0 and ` (SL)/sigma ` for q to allow for some conduction from black daisy areas to white daisy areas. That value is ` 0.2(SL)/sigma `.