These student materials complement the Modeling Earth Systems Instructor Materials. If you would like your students to have access to the student materials, we suggest you either point them at the Student Version which omits the framing pages with information designed for faculty (and this box). Or you can download these pages in several formats that you can include in your course website or local Learning Managment System. Learn more about using, modifying, and sharing InTeGrate teaching materials.

Unit 10 Reading: The Tragedy of the Commons

One might wonder if there is a need for any kind of government regulation in order to curb emissions of carbon dioxide. Some people suggest that either a carbon tax or a fixed number of tradable carbon emissions permits are necessary to prevent society from passing into dangerous levels of atmospheric CO2. Other people are of the opinion that there is already too much government regulation, and that the free market will solve the problem of emitting too much carbon dioxide when the costs outweigh the benefits.

The problem here is a lack of economic incentive in dealing with an entity like the global atmosphere that is shared by all but owned by none. This problem has been recognized for a long time, but was first made popular by an ecologist, Garrett Hardin, in 1968 and is commonly known as "The tragedy of the Commons." Hardin's concept is fairly simple, and he illustrated it with a kind of parable. 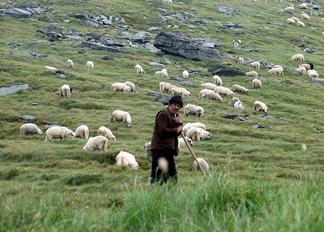 Provenance: Image by 'friend of Darwinek' and accessed on Wikimedia: https://commons.wikimedia.org/wiki/File:Rumunia_5806.jpg
Reuse: This item is offered under a Creative Commons Attribution-NonCommercial-ShareAlike license http://creativecommons.org/licenses/by-nc-sa/3.0/ You may reuse this item for non-commercial purposes as long as you provide attribution and offer any derivative works under a similar license.

Suppose there is a common piece of grassland in a village — the commons — and it is owned by no one but is available for all to use. People start to graze their sheep on the nice grass and benefit from the well-fed sheep (Fig. 1). Based on the size of the field and the rate of grass growth, there is a carrying capacity for the field — the maximum number of sheep the field can support in a sustainable manner. If people put more sheep on the land than the carrying capacity can support, the resource dwindles and eventually disappears altogether (Fig. 2), and at that point it is of no use to anyone. The problem is that as long as there is any grass in the commons at all, it is to each individual's benefit to continue to place new sheep in the field. So, overgrazing is inevitable in this case, and the common resource is depleted. There are many documented examples of this kind of occurrence, and they all are related to cases where there is an open-access resource available to everyone. 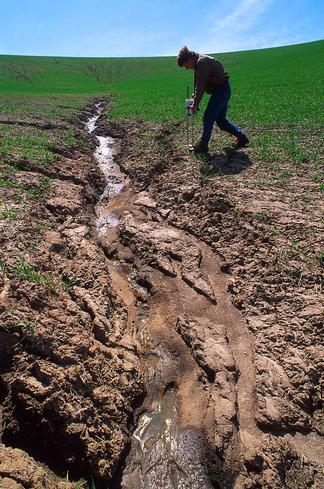 ×
Figure 2: Soil erosion is a common by-product of overgrazing that degrades soil fertility over time and can lead to the depletion of the grass resource.

Provenance: Image by Jack Dykinga and was released by the Agricultural Research Service, the research agency of the USDA. It was accessed at Wikimedia: https://commons.wikimedia.org/wiki/File:Erosion.jpg
Reuse: This item is in the public domain and maybe reused freely without restriction.

How can this tragedy of the commons be avoided? One way would be for the community to impose a cap-and-trade system on grazing. Here is how it could work. The community studies the problem and figures out what the carrying capacity of the field is in terms of the total number of sheep the field can support. They then allocate grazing shares equally to everyone in the community. Community members can buy and sell these shares so that if someone does not want to deal with sheep, they can still benefit from the common resource by selling their shares to someone who wants to graze more sheep. The shares can be re-allocated each year in case the carrying capacity of the field changes. Another approach might be for the community to sell the land to individuals and then let individual farmers manage their own plots of land, in which case they would have an economic incentive to manage their land in the best way possible, avoiding the overgrazing problem. The community might place some restrictions on what the owners could do with the land, like preventing them from putting up apartment buildings or a feedlot; this would effectively be like the zoning regulations that most communities have.

The point to take away from this is that when you have a commonly held resource that is openly accessible to all, everyone must act together in a coordinated, regulated way in order to avoid depleting or damaging the resource and to ensure that the resource serves the best interests of everyone involved. In the case of carbon dioxide emissions into the atmosphere, the best interests of everyone can only be served if there is some form of a regulatory plan in place that limits the amount of this heat-trapping gas that can be added to the atmosphere, otherwise we will succumb to the tragedy of the commons and experience potentially catastrophic climatic warming. Furthermore, the reduction of carbon dioxide emissions has to be coordinated so that each country has confidence that if it does its part, the other countries will also do their parts and the global concentration of CO2 will stabilize or even decline. This coordination has in principal already been done and the limits on emissions already agreed upon by most of the countries of the world through the Kyoto Protocol, a 1997 international treaty designed to curb greenhouse gases. The United States is the only significant holdout, citing potential economic damages were it to abide by the stipulations of the treaty.

One of the difficulties of dealing with anthropogenic greenhouse gas emissions is the timescale over which their impacts will unfold. Unlike the fairly immediate results of putting too many sheep on a field, the negative effects of too much carbon dioxide in the atmosphere will largely take place in a few human generations, long after current politicians and other decision-makers are gone. Furthermore, disagreements exist about how much money our current society should be spending for the purpose of ensuring a livable planet for our grandchildren and great-grandchildren and the generations to come thereafter. Some people argue that we should spend money now to prevent climatic damage in the future, while others argue that such expenditures are a waste of money since future generations will have better technologies to deal with greenhouse gas emissions. The latter believe that spending money now will only hurt our present economic growth.

The discount rate is one way that economists address this question. It is is a percentage by which future costs or profits (or any other quantity) are "discounted" so that their values through time are comparable to the present time. Calculating the present value of a given amount of money takes the general form:

You can rearrange this to:

As we conduct our modeling exercise this week, we will think about the implications for high vs. low discount rates and how they affect our perception of future costs or benefits. While we will return to Garrett Hardin's Tragedy of the Commons parable and model the impacts of different sheep management strategies on a hypothetical field, what we learn about discount rates will be broadly applicable to the problem of global climate change and what we should do now to avoid dangerous levels of warming in the future.