These materials have been reviewed for their alignment with the Next Generation Science Standards as detailed below. Visit InTeGrate and the NGSS to learn more.

Students explore the causes of mass wasting events. They use Newton's second law, algebraic and physical models to predict the stability of various geographic settings under different conditions.

Structure and Function: Investigating or designing new systems or structures requires a detailed examination of the properties of different materials, the structures of different components, and connections of components to reveal its function and/or solve a problem. HS-C6.1:

Stability and Change: Much of science deals with constructing explanations of how things change and how they remain stable. HS-C7.1:

Scale, Proportion and Quantity: Algebraic thinking is used to examine scientific data and predict the effect of a change in one variable on another (e.g., linear growth vs. exponential growth). HS-C3.5:

The Roles of Water in Earth's Surface Processes: The abundance of liquid water on Earth’s surface and its unique combination of physical and chemical properties are central to the planet’s dynamics. These properties include water’s exceptional capacity to absorb, store, and release large amounts of energy, transmit sunlight, expand upon freezing, dissolve and transport materials, and lower the viscosities and melting points of rocks. HS-ESS2.C1:

Motion and Stability: Forces and Interactions: Analyze data to support the claim that Newton’s second law of motion describes the mathematical relationship among the net force on a macroscopic object, its mass, and its acceleration HS-PS2-1:

This material was developed and reviewed through the GETSI curricular materials development process.

How do slope characteristics and magnitude of forces dictate whether or not a slope will fail? Can environmental and built characteristics change the magnitude of these forces? In this unit, students qualitatively and quantitatively consider the impact of slope angle, driving force, and frictional force on mass-wasting potential. A map activity prompts students to think about how climatic, tectonic, and geologic factors, as well as population and land use characteristics can influence mass-wasting potential.

Hide
Online-adaptable: Part 1 (lecture) and Part 3 (discussion) are particularly straight forward to adapt to online. Part 2 student exercise is typically done with printed maps but can be successfully adapted to online by having synchronous groups of students work together to annotate digital map files using: 1) PDF annotation tools in Adobe or 2) putting the map images into a Google Slides file and using the scribble tool. Google Earth files are also provided as an additional option.
Used this activity? Share your experiences and modifications 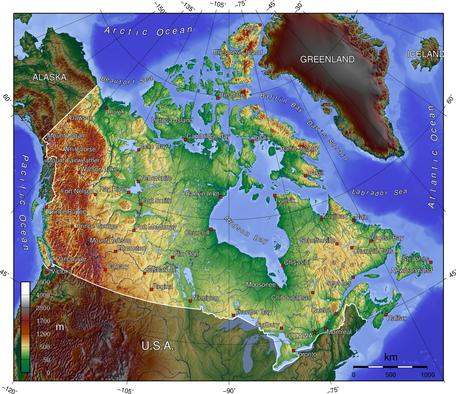 ×
A topography map of Canada. The topography of an area is important to consider when thinking of mass wasting potential. Wikipedia.

Provenance: Image from user "Anchjo" and accessed via Wikimedia Commons: https://commons.wikimedia.org/wiki/File:Canada_topo.jpg
Reuse: This item is offered under a Creative Commons Attribution-NonCommercial-ShareAlike license http://creativecommons.org/licenses/by-nc-sa/3.0/ You may reuse this item for non-commercial purposes as long as you provide attribution and offer any derivative works under a similar license.

The content in Unit 3 is appropriate for introductory geology, hazards, and other geoscience courses; sophomore-level courses in which geodesy and/or geomorphology/surface processes are being introduced; or non-geoscience courses where infrastructure planning, Earth hazards, and/or the nature and methods of science are being investigated. Unit 3 activities can be adapted to serve small- or large-enrollment classes and can be executed in lecture and lab settings as an in-class activity in which students work in small groups, a lab exercise, or as part of a ~2-week investigation of the use of geodesy to understand surface process hazards and decision-making using the entire Surface Process Hazards module.

Before coming to class, students need to have a general understanding of the concept of hazard versus risk. As a brief preparation exercise, we suggest Activity 1.1 from the Hazard and Risk exercise, part of the InTeGrate project's Natural Hazards and Risks: Hurricanes module.

Part 1: Interactive lecture and student exercise on the physics of mass wasting

Using free body diagrams with vectors to illustrate slope angle, driving force, frictional force, and the concept of stress, students are introduced to the physical factors that contribute to mass wasting. Options for implementation include interactive lecture followed by in-class exercise or starting with the in-class exercise and interspersing individual lecture slides throughout the in-class exercise.

After an interactive lecture on cohesion and internal friction as contributors to the strength of a medium, students will review the factors that increase driving forces and increase resisting forces in the second part of the in-class activity.

Ask the students to break into small groups and brainstorm ideas about mass-wasting mitigation and preparedness options. Here are some potential questions to pose to the students:

Conclude with a brief class discussion.

We have embedded several questions into the interactive lecture slides that can be used as formative assessment in real time. In addition, several questions in the in-class exercises for Part 1 and Part 2 require students to share the results of their calculations with their peers (for example, calculating masses of uniform volumes of sand, limestone, and basalt) and contribute ideas during the brainstorming portions that could be reported out to the class.

Level 1 example: Name three physical factors that change the driving forces and/or the resisting forces on a slope. For each factor that you name, state whether the factor increases or decreases the likelihood of the slope to fail. 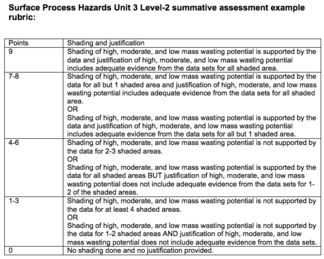 Provenance: Becca Walker and Sarah Hall
Reuse: This item is offered under a Creative Commons Attribution-NonCommercial-ShareAlike license http://creativecommons.org/licenses/by-nc-sa/3.0/ You may reuse this item for non-commercial purposes as long as you provide attribution and offer any derivative works under a similar license.
Level-2 example: Question 12 from the Part 2 in-class exercise. Students are provided with a hillshade image of one of the study areas and aerial imagery, topo map, geologic map, population density map, and seismic hazard maps from the study area. Based on their knowledge of physical factors that contribute to mass-wasting potential and how these factors are influenced by environmental and built characteristics, students shade two areas of high mass-wasting potential, two areas of moderate mass wasting potential, and two areas of low mass-wasting potential on their hillshade image. They must also provide a written justification explaining how they made their decisions regarding high, moderate, and low mass-wasting potential.
Unit 3 Level-2 Example scoring rubric (Microsoft Word 2007 (.docx) 82kB Jun11 17) 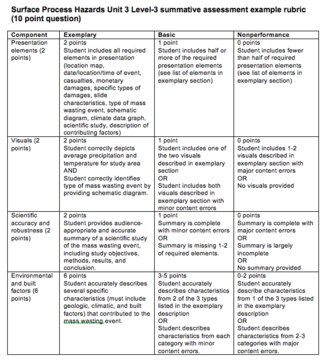 Provenance: Becca Walker and Sarah Hall
Reuse: This item is offered under a Creative Commons Attribution-NonCommercial-ShareAlike license http://creativecommons.org/licenses/by-nc-sa/3.0/ You may reuse this item for non-commercial purposes as long as you provide attribution and offer any derivative works under a similar license.
Level 3 example: Upon the conclusion of Unit 3 in-class exercises, students (likely working in pairs or small groups) will prepare a 5-7 minute "case study" presentation on one of the four study areas that they have looked at in the context of landscape features and relative mass-wasting potential. Students should plan to cover the following information in their presentation: type of mass-wasting event (schematic drawing), date/time/location of the event, damage caused by the event, description of the different factors leading to the event, and other physical parameters (volume, velocity, or duration of event).

Note that we define Level 1, Level 2, and Level 3 assessments throughout the module based on Bloom's Taxonomy levels and examples of skills/tasks/actions involved in answering the question. Level 3 corresponds to higher-level cognitive tasks. Additional details in the Guide to GETSI Assessment Levels 1, 2, and 3 (Microsoft Word 2007 (.docx) 304kB Jun11 17)