Students read and analyze a case study of the Oso, Washington, landslide of 2014. Students describe the geographic and climatological characteristics of the region to explain the causes and consequences of the landslide.

Obtaining, Evaluating, and Communicating Information: Compare, integrate and evaluate sources of information presented in different media or formats (e.g., visually, quantitatively) as well as in words in order to address a scientific question or solve a problem. HS-P8.2:

The Roles of Water in Earth's Surface Processes: The abundance of liquid water on Earth’s surface and its unique combination of physical and chemical properties are central to the planet’s dynamics. These properties include water’s exceptional capacity to absorb, store, and release large amounts of energy, transmit sunlight, expand upon freezing, dissolve and transport materials, and lower the viscosities and melting points of rocks. HS-ESS2.C1:

Plate Tectonics and Large-Scale System Interactions: Plate tectonics is the unifying theory that explains the past and current movements of the rocks at Earth’s surface and provides a framework for understanding its geologic history. Plate movements are responsible for most continental and ocean-floor features and for the distribution of most rocks and minerals within Earth’s crust. HS-ESS2.B2:

Landslides can have profound societal consequences, such as did the slide that occurred near Oso, Washington in 2014. Forty-three people were killed and entire rural neighborhood was destroyed. In this unit, students consider the larger-scale tectonic and climatic setting for the landslide and subsequently use lidar and SRTM (Shuttle Radar Topography Mission) hillshade images, topographic maps, and InSAR (interferometric synthetic aperture radar) to determine relationships between landscape characteristics and different types of mass-wasting events. They conclude by considering the societal costs of such a disaster and ways that communities in similar situations may mitigate their risk.

Hide
Online-adaptable: The exercises in unit are completely digital and thus at a logistical level it can be switched to online fairly easily. However, due to the relative complexity of the data investigations and group discussions, there will still be a fair bit of instructor support needed and/or extended small group that should be arranged.
Used this activity? Share your experiences and modifications 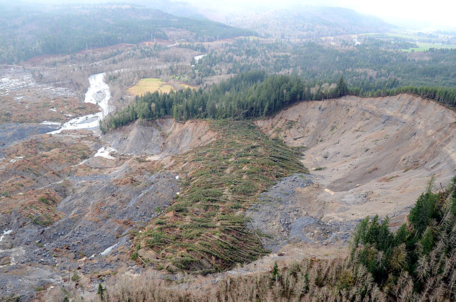 ×
A view from a Washington Army National Guard helicopter shows trees that were at the very top of the hill when the mudslide occurred now lie across the slide's width like a woven belt.

The content in Unit 4 is appropriate for introductory geology, hazards, and other geoscience courses; sophomore-level courses in which geodesy and/or geomorphology/surface processes are being introduced; or non-geoscience courses where infrastructure planning, Earth hazards, and/or the nature and methods of science are being investigated. Unit 4 activities can be adapted to serve small or large-enrollment classes and can be executed in lecture and lab settings as an in-class activity in which students work in small groups, a lab exercise, or as part of a ~2 week investigation of the use of geodesy to understand surface-process hazards and decision making using the entire Surface Process Hazards module.

This unit precedes Unit 5: Mitigating future disasters—developing a mass-wasting hazard map in which students create a hazard map and report on an area susceptible to mass wasting. If the entire two-week module will not be used, we recommend pairing Unit 4 with Unit 5 to give students the opportunity to use geodetic data to identify landscape features associated with a slow-slip mass-wasting event and classify low, medium, and high-risk areas based on landscape characteristics. However, Unit 4 does build on skills from Unit 2: Reading the landscape and Unit 3: Understanding landslide factors so you may need to have to give some background practice or information on these topics.

In order to place the Oso Landslide in a larger geologic context, students will review the environmental and built characteristics of the northwest Washington locality using the maps from Units 2 and 3.

A) Plate tectonic setting
Seismic and volcanic hazards exist along all of eastern Washington state related to the subduction of the Juan de Fuca Plate beneath the North American Plate. This is a good opportunity to relate the plate tectonic setting to the landscape features (faults, linear ridges/streams, mountains) and present hazards. Use the same map-set for Northern Washington as you did in Unit 3.
Northern Washington Maps Unit 3-4 (Acrobat (PDF) 41.3MB Oct22 20)

We suggest one of the following already-existing plate tectonics activities:

B) Climatic setting
Washington state has an excellent example of high-precipitation region and a rain shadow. High seasonal precipitation focused on the western slopes of the Cascades and arid conditions prevailing over eastern Washington. In this activity students looks at climate data from near Oso, Washington, as well as a precipitation map of Washington to learn more about the general climate of the area as well as in the time leading up to the slide itself.

Along with the assignment below and the map set they have already used, students should be given a lidar hillshade image onto which they will identify, map, and label morphological features of the mass-wasting event. They will answer qualitative questions and will color code their maps to show regions of high/moderate/low risk for damage due to slip. Students will then be shown spatial data of the region at various timesteps (including SRTM [Shuttle Radar Topography Mission], lidar, and InSAR maps of the locality) and answer questions related to the geology and societal impacts of the event.

Most likely, formative assessment will be gathered through discussion with students and observation of students as they work through the exercise. By monitoring classroom activity, the instructor can gauge how students are progressing toward the learning outcomes.

The primary summative assessment for the module is the Oso Landslide Exercise. In addition, in order to assess whether students have achieved a sufficient understanding of the societal side of the unit, one of the following questions could be used on a test.

Level 2: Besides the mass of material that buried the town, the Oso mass-wasting event left a mark on the geographic and societal landscape both locally and regionally. Students will be asked to answer the following questions:

Level 3: Students will research what has been done to plan for the future in the aftermath of the Oso event. They will prepare a one-page narrative describing how the community and/or state is working to prevent or preparing for the future in this landslide-prone region.