Preparing for the Voyage

Earth's climate has changed dramatically over its 4.6 billion-year history. In just the last 650,000 years there have been seven cycles of glacial advance and retreat. The last ice age ended abruptly about 11,700 years ago marking the beginning of the modern climate era and, not coincidentally, the beginning of human civilization. Most of these climate changes are attributed to very small variations in Earth's orbit that change the amount of solar energy our planet receives.

But how do we know the nature of past climate?

One important method scientists use to find out about past climate involves studying layers of ocean sediments soil, sand, and minerals washed from land into water, usually after rain.. Layers of sediments form in oceans when rock fragments, sand, silt, and clay-sized sediments eroded from the surrounding land are deposited on the ocean bottom. Typically, sediments are transported from land to the oceans by water, wind, or glaciers. Rivers carry sediments into larger bodies of water—bays, seas, and oceans. When the water carried by the rivers reaches deeper and calmer water, the sediments fall to the bottom or are swept into fast-moving, deep water ocean currents (tubidity currents a current of rapidly moving, sediment-laden water moving down a slope through water, or another fluid. The current moves because it has a higher density than the fluid through which it flows—the driving force of a turbidity current is derived from its sediment, which renders the turbid water denser than the clear water above.) and transported to deeper water. Gradually, these sediments are deposited layer upon layer over time to form the ocean basins. Likewise, winds can bring sediments, volcanic ash, and pollen to the water. 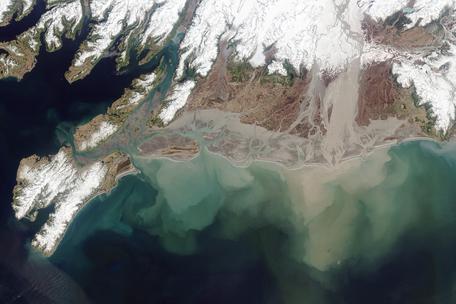 ×
Rivers carry enormous amounts of sediment to the ocean. These sediment plumes extend a hundred miles into the Gulf of Alaska. Source: NASA

The ocean teems with microscopic life, and organisms such as diatoms, foraminifera, and radiolarians abound. When these microscopic organisms die, they become incorporated with sediments on the ocean floor and become part of the sedimentary rock record. The fossilized remains of these tiny organisms are called microfossils and they can reveal valuable information about Earth's past.

Microfossils a fossil that must be studied microscopically. are generally smaller than a grain of sand but are important to the expedition because they can be used to determine the ages of the sediments. Some species of microfossils only live for a geologically short time, so by identifying the species, we can also identify the time period when the sediment containing the fossil was deposited. These tiny organisms are also used to determine past climatic conditions, such as temperature, salinity of the ocean, paleo-ocean currents, and water depth. 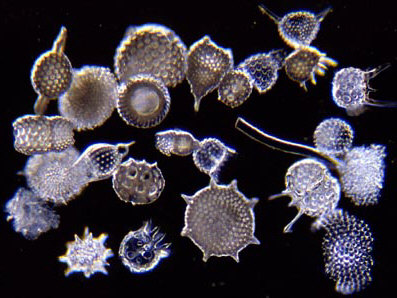 ×
Radiolarians, diatoms, and forams have an amazingly diverse geometry and structure. Source: IODP

Some microfossils are planktonic, which means they live and float freely in the surface layers of the ocean, while other microfossils are benthic, which means they live on the sea floor. The numbers and types of these microscopic organisms change according to what the ocean's temperature and pH range of numbers expressing the relative acidity or alkalinity of a solution. In general, pH values range from 0 to 14. are at the time, and the presence or absence of ice cover during that time in the past. Deposits of microorganisms and sediments form layers over time as younger sediments are deposited on top of older sediments. The layers provide evidence of changes in Earth's climate because going deeper into the sediments is the equivalent of going back in time. Scientists who want to understand Earth's past history drill into the seafloor to collect samples of these layers. The samples they recover are called sediment cores. 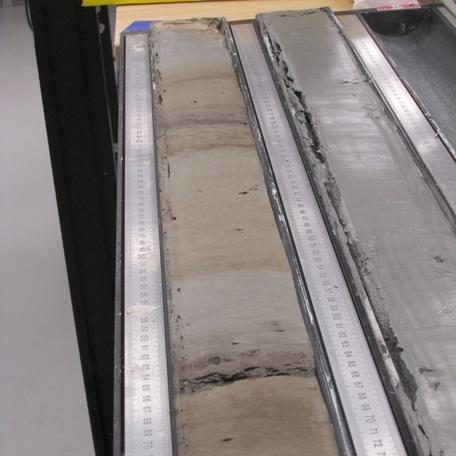 ×
Sediment cores being prepared in the lab. Source: IODP

Sediment cores are brought up from the bottom of the ocean with a hollow drill that captures sediment the way a straw plunged through clay. Then the cores are sliced in half, and stored in plastic tubes in large, refrigerated rooms to preserve them. Each variation exhibited by layers in the core signal a change in the environmental conditions present when those sediments were deposited.

A diverse team of scientists on board the JOIDES Resolution will travel to the Gulf of Alaska to collect sediments that will help reveal these secrets about Earth's past! How do scientists know what conditions on Earth were like millions of years ago? Expedition 341 will use sediment cores to answer these intriguing questions about Earth's history.

You will join the crew and use sediment core data collected from the expedition as it travels to a series of sites along the southern shore of Alaska. During the expedition, the scientists on board will try to answer the following questions related to past climate change and the effects of these changes on mountain building. Like scientists on board Expedition 341, you will work collaboratively with your classmates to answer these questions:

In Part A, you will learn about the ship you will sail on the Gulf of Alaska, and the drillship Joides Resolution. How is it equipped to drill into the ocean floor in order to find clues about past climate? In Part B, you will meet your fellow scientists and crew members and learn how you will gather the core data for your final project.

After completing this Lab, you should be able to respond to the following: