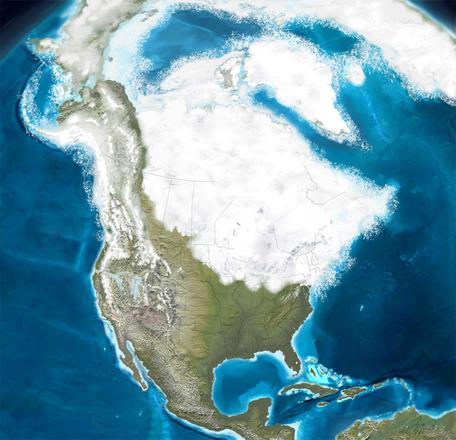 ×
Ice sheets covered a significant portion of North America 5 different times during the Pleistocene era. Source: NAU/Ron Blakely
When you think of an Ice Age what do you imagine? Do you think of a scene of Earth covered in ice, with Neanderthals and mammoths roaming the land? Gigantic sheets of ice advanced and retreated over much of Canada and North America during the Pleistocene Epoch, a period in geologic time ranging from approximately 2.5 million to 12,000 years ago. View the image, right, to get a sense of the extent of the ice sheet during this time. (Note: Click on the image for a larger view.)

Earth scientists define an ice age a cold period marked by episodes of extensive glaciation alternating with episodes of relative warmth. as any geological period in which long-term cooling takes place and ice sheets and glaciers exist. That means we are currently in the midst of an ice age; more specifically, we are in an interglacial is a geological interval of warmer global average temperature lasting thousands of years that separates consecutive glacial periods within an ice age. within a glacial age.

Close your eyes and try to picture Earth during the Pleistocene. The continents were roughly in their current positions, and during glacial periods they were covered with ~5,000 to 10,000 feet of ice in some areas. Imagine how this enormous amount of ice affected the landscape it scoured, not to mention sea level! Scientists estimate that sea level dropped by several hundred feet during glacial periods. During interglacial periods melting ice sheets caused significant sea level rise, completely submerging coastal areas. Melting glaciers also carry an enormous amount of sediment from the land into the ocean. This is exactly what scientists on board the JR are investigating.

During an Ice Age, Earth's climate cycles between warm periods in which significant glacial melting occurs (retreat), and colder periods characterized by the spread of ice sheets (advance). Earth is currently experiencing an interglacial period known as the Holocene, and has been for more than 11,000 years. Based on observed patterns, we should now be swinging back to a period of glaciation. However, since the Industrial Revolution, increased carbon dioxide (CO2) levels in the atmosphere, due largely to burning fossil fuels, are pushing Earth toward a warmer climate. In fact, we now see that this increase in CO2 is raising temperatures on Earth at a rate around 100 times faster than in previous periods of warming.

When ice sheets advance over land, they scour the landscape and move huge amounts of rock and other sediments. The ice grinds the rocks it passes over into a powder called rock flour finely powdered rock produced as a result of glacial erosion or by artificial grinding.. The ice also picks up and transports millions of tons of soil and sediment and carries it along in bands called moraines. Long Island in New York was formed when an ice sheet dumped many cubic miles of rocky material as it retreated at the end of the last ice age. 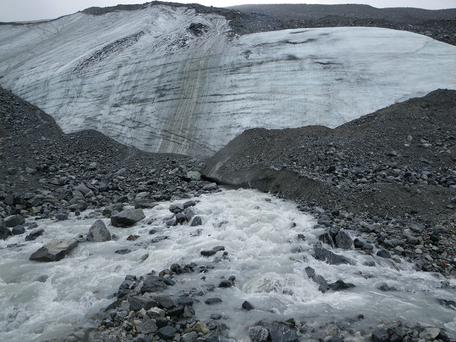 ×
A meltwater stream carries sediments downstream toward the sea. Notice the dark streaks in the glacier—vast amounts of dirt and rock locked up in the ice. Source: USGS

When glaciers retreat, the meltwater carries these sediments in rivers until they reach larger bodies of water—lakes, bays, seas, and oceans. Sometimes, huge boulders are left in very odd places, far from where they originated. These are called glacial erratics a piece of rock that differs from the size and type of rock native to the area in which it rests. They are carried by glacial ice, often over distances of hundreds of kilometers and range in size from pebbles to giant boulders. . 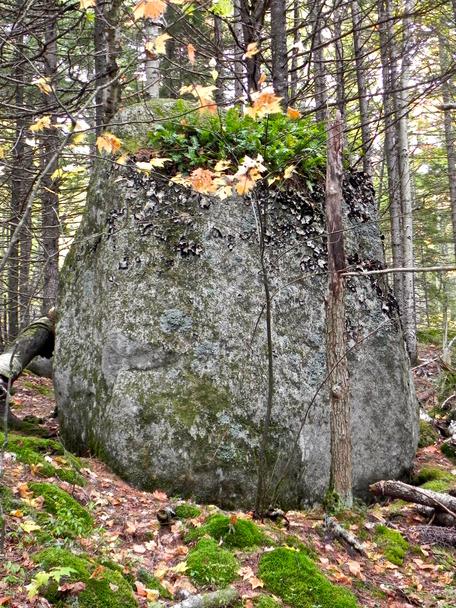 Hide
An ice age is a period of time with much colder temperatures that enable the formation of extensive ice sheets and glaciers.

2. What evidence do we have that ice sheets have passed over continental areas?

Hide
When ice sheets pass over a continental area they can move massive amounts of material like a bulldozer. Some of this material is left behind as ridges of material or glacial erratics (boulders). The tops of rocks can be scoured, and pulverized to produce scratches and rock flour.
In Part A, you will investigate how glaciers and massive ice sheets can alter the landscape. In Part B, you will examine the phenomena that trigger the onset of ice building and subsequent periods of ice melting—Milankovich Cycles refers to long-term variations in the orbit of the Earth which result in changes in climate over periods hundred of thousands of years and are related to ice age cycles..