Coring Is Not Boring!

Sediments can reveal the secrets of Earth's past climate history—what it was like on land and in the sea thousands and even millions of years ago. Over geologic time, the sinking and settling of sediments occur at varying rates that depend on the climatic conditions of the time. Thick deposits can build up. If undisturbed, the deepest layers will represent the oldest sediments while those on the surface will be the youngest. This layering process, called the Principle of Superposition the scientific law stating that in any unaltered sequence of rock layers, each layer is younger than the one beneath it and older than the one above it, so that the youngest layer will be at the top of the sequence and the oldest at the bottom., gives geologists an important tool for interpreting the history of Earth. Scientists can use it to determine the relative ages of sediment layers even if their exact ages are unknown.

Since weathering the process by which exposure to atmospheric agents, such as air or moisture, causes rocks and minerals to break down. This process takes place at or near the Earth's surface. and erosion the wearing away of land surface by wind or water, intensified by land-clearing practices related to farming, residential or industrial development, road building, or logging. disturb layers of sediment and sedimentary rock exposed on land, only in the ocean can scientists search for a continuous and unbroken record of how our climate has changed over time. And, unlike tree rings and other kinds of paleoclimate proxy data a past climate record like ice cores and tree rings used to interpret paleoclimate. Organisms, such as diatoms, forams, and coral serve as useful climate proxies., which contain a relatively short climate record, sediment cores preserve thousands and even millions of years of Earth's history. Sediment bands (seen as changes in color, texture and composition in the core) indicate climate cycles, each of which may span hundreds to thousands of years. Using cores to interpret how and when the various layers were laid down helps researchers piece together Earth's history of climate change. 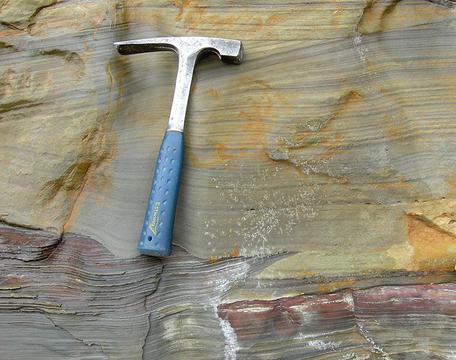 ×
A series of sedimentary rock layers are shown with a rock hammer shown for scale.

Provenance: USGS
Reuse: This item is in the public domain and maybe reused freely without restriction.

×
Sedimentary rock layers on land are worn away by water and wind and often give an incomplete record of geologic events. Ocean sediments, for the most part, remain undisturbed. This image is a typical core of ocean sediments. Source: IODP

When rivers deposit sediments into the ocean over thousands of years, thick layers are produced. As the sediment layers build up, those on the bottom are subjected to great pressure and temperatures. Ultimately, the layers are turned into rock as silica or calcium carbonate cements the sediment particles (called clasts) together.

During periods of glaciation process of becoming covered in glaciers, advancing ice sheets grind away at the landscape and increase the amount of sediment pouring into ocean basins. Scientists onboard the JOIDES Resolution are interested in how global climate change caused by the advance and retreat of glaciers, subsequent change in erosion rates, and mountain building events are related. Home to the highest coastal mountain range on Earth, the St. Elias Mountains, and the Gulf of Alaska is an ideal location for studying these interconnections. The St. Elias Mountains formed during a period of significant global cooling and glacial erosion. Expedition 341 will examine how the development of the St. Elias Mountains may have been impacted by a cooling global climate that took place approximately 5 million to 2.5 million years ago.

About 2.5 million years ago, a significant global climate change occurred, including a drop in global temperature that resulted in the advance of glaciers in the Northern Hemisphere. Scientists on board of Expedition 341 hypothesize that the effects of increased glaciation may have been profound, leading to more erosion on land, which may have contributed to the exhumation the uncovering or exposure through erosion of a former surface, landscape, or feature that had been buried by subsequent deposition and deformation an alteration of the size or shape of rocks. Deformation is caused by stress, the scientific term for force applied to a certain area. of the St. Elias Mountains. 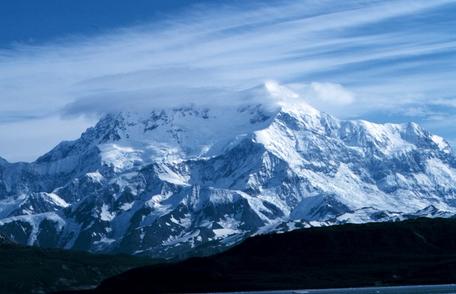 ×
The St. Elias Mountains on the southern coast of Alaska. Source: USGS