1. Preparing for the Voyage

In Part A of this activity, you will learn about the ship you will board for their journey to the Alaskan coast: the JOIDES Resolution. How is it equipped to drill into the ocean floor and find clues about past climate? In Part B, you will meet the crew of scientists who will help you gather the core data for your final project. You will play a matching game by viewing videos of scientists and then attempting to match the correct career card based with the video interviews of members of the crew and scientists on board. 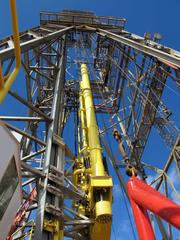 2. Coring is Not Boring!

In this activity, you will use the engineering design process to build a simple model of the Joides Resolution coring apparatus. Your goal is to recover a core sample from a model of the ocean floor composed of different layers of clay.

In Part A of this activity, you will investigate how massive ice sheets can alter the landscape and deposit their sediments in the ocean. In Part B, you will examine the phenomena that trigger the onset of ice building and subsequent periods of ice melting—Milankovich Cycles.

4. Climate Clues from Sand and Mud
In the first part of this activity, you will learn how particle size affects the rate of sediment deposition, and how sediment layers form. In Part B, you will build a physical model that shows how sediments are deposited in deep ocean environments during periods of glaciation.

5. (Geologic) Timing is Everything!

In Part A of this activity, you will investigate the scope of geologic time by creating a timeline that marks major geologic and biological events over the 4.6 billion year history of planet Earth. In Part B, you will make another timeline that encompasses the 23 million year span of time that the IODP expedition will focus on in terms of sedimentation and climate change. 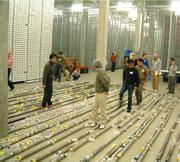 In this culminating activity, you put your observational skills to work to analyze core features to uncover clues about what Earth's climate was like in the past. In Part A, you will use an online glossary to investigate the nature of different core features and what the presence of these features means in terms of climate and climate change. In Part B, you will use "The Core Lab" visualization to examine sedimentary features of core U1417B. In Part C, you will gather evidence to support your predictions about what changes in climate have occurred in the southern Alaska region. Then, in Part D, you will continue to assemble evidence by examining microfossils found at different points in the sediment column again using the "The Core Lab" visualization. Finally, in Part E, you will assemble your data and evidence to draw some conclusions about climate changes in the S. Alaska region during the time the sediments were deposited.

You will end the module by preparing a short presentation of your groups' findings. Your report will use the point of view, and the evidence collected by, four types of scientists: