A more nuanced view of Concept-driven versus Data-driven visualizations

In several previous posts, I explored how Clark &amp; Weibe's (2000 ) idea of data-driven versus concept-driven visualizations plays out in geosciences and how this distinction could be important as we help students learn to learn from visualizations. This semester, in my course on "Teaching &amp; Learning Concepts in Earth Sciences," students found and documented visualizations that afford insights via spatial thinking about a topic they are working on for a semester long project. Applying the idea of data-driven versus concept-driven visualizations to this image collection surfaced several additional nuances to the categorization schema.

There were classic examples of concept-driven visualizations, in which an artist or scientist-artist has depicted an idea, a conceptual model: 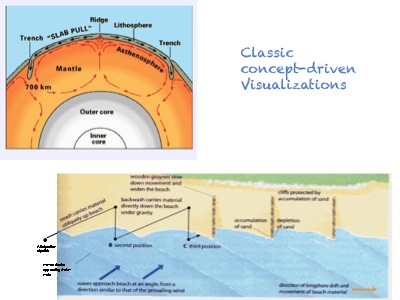 And, there were classic examples of data-driven visualizations, in which the information dominating the visualization was derived by turning nature into numbers and using a formal symbol system to represent those numbers on the page: 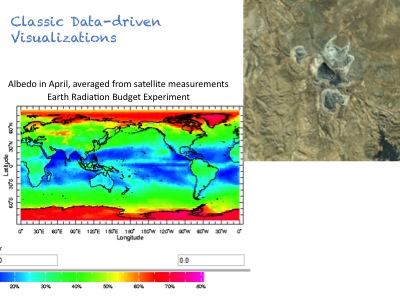 But in addition, there were hybrid visualizations, such as this one, in which there is a data layer, showing forecast increase in air temperature, plus a layer with information that it is so generalized that it would have to be considered as someone's concept of where each of several kinds of environmental problems will develop. But on careful study, the layer that looks like data turns out to be model output rather than empirical data. Whether on not to call model output "data" is a point on which scientists in different fields agree to disagree (Manduca &amp; Mogk, 2002). 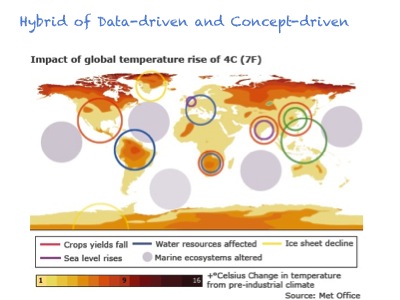 One of my previous posts pointed out that concept driven visualizations are at high risk of overspecificity, because in many cases the artist must choose which of several (or many) possibilities to put down on the page. The viewer can be left with the impression that what is sometimes true (a "conditional truth") is more universal or representative than it really is (a "universal truth"). Although I didn't say so, I probably conveyed the impression (and probably believed as I wrote) that this wouldn't be a problem with data-driven visualizations. 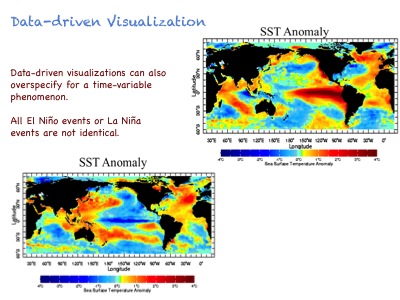 And then finally, there was this. Surely this was shaped by a graphic artist rather than output from a database by mapping software, suggesting it would count as a concept-driven visualization. On the other hand, it records meticulous observations from a specific place and records a specific interval of geological time, a specific instance or "case," rather than an idealized concept. In the end, the determining factor for me is in the red circle, where the steepness of the cliff face changes within a lithological unit. To my eye, this looks like reality. As Dale often says, "real data have real warts." Concept visualizations do not. I classified this as a data-driven visualization. 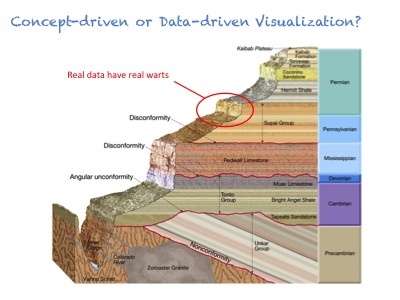 Click on images above for links to the image sources.

Comment? Start the discussion about A more nuanced view of Concept-driven versus Data-driven visualizations