Below is an example of a powerful concept-driven visualization from an introductory textbook. This single figure pulls together the findings of geoscientist-centuries of earth exploration. To learn enough about seafloor bathymetry to be able to sketch in the mid-ocean rift valley and the abyssal hill fabric required ship-years worth of echo-sounder data and the cartographic genius of Marie Tharp. To learn enough about mid-ocean ridge magmatism to confidently write "spreading center basaltic vulcanism" required hundreds of rock dredges and thousands of analyses. In terms of insights per square centimeter, this figure is a masterpiece.

At the same time, this figure is also a potential source of deep confusion, should the student progress beyond the introductory stages of geoscience study. That's because the figure superimposes and confounds two different kinds of information, and gives the student no clue that it has done so. 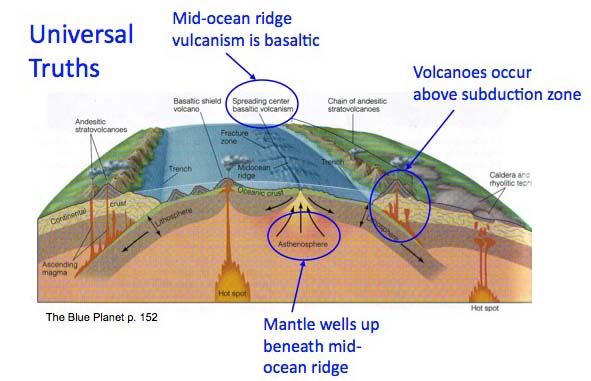 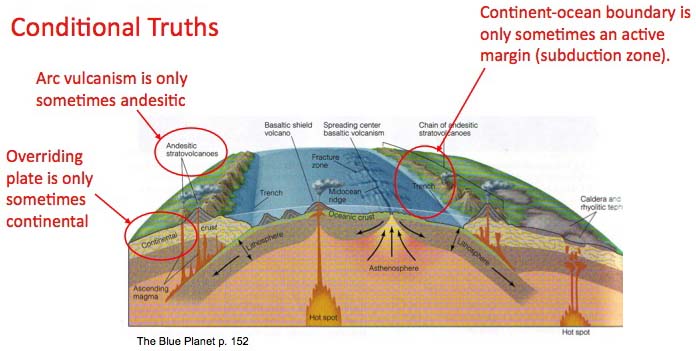 The same figure superimposes conditional truths and universal truths. This is not a mistake on the artist's part, and it's not a flawed illustration. It is an inevitable consequence of the Earth's heterogeneity. The Earth typically has many variants of its structures and processes, but the creator of the visualization must choose only one, or at best a few, of the variants to put into the drawing. In other words, a concept-driven visualization overspecifies.

A student looking at this figure would have no way of knowing which aspects were universal truths and which aspects were conditional truths. This illustration was published for the introductory college level audience; it would normally take several more years of earth science education beyond this level to accumulate enough knowledge to sort this out.

I'm reading about model-based teaching and learning, and came across a broader statement that encompasses the point I made above, that students looking at a concept-driven visualization don't necessarily know enough about the referent (the Earth) to fully understand the representation:

(from Greca & Moreira, 2000, p. 5-7):
"When we teach, it is common to assume that students have acquired or constructed mental models that are copies of the conceptual models that have been presented to them...ideally, there should be a simple and direct relation between a conceptual model and a mental model. However, this does not seem to be the case. It seems important to state here that the students do not necessarily see those conceptual models as such. Firstly, because they do not have the necessary knowledge of the field to interpret them as conceptual models. It is as if we see Picasso's Guernica for the first time, without knowing what the Spanish Civil War was. One is able to see eyes, paws, heads, knives, but the painting will be meaningless. Secondly, because students often do not understand that a conceptual model is a simplified and idealized representation of phenomena or situations, without being told the actual phenomena or situation."