Where do Data-Driven Visualizations Come From?

With doctoral student Sandra Swenson, I have been researching how middle school and high school students understand one particular data-driven visualization: a global map of topography and bathymetry. 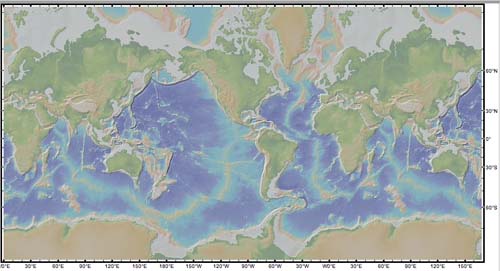 In the course of this research, I mapped out the flow of information from the Earth to the representation, and then onward to the mind of the viewer/learner. The main flow of information is shown along the central spine of the diagram below: First, data is acquired from the Earth by various kinds of electromechanical sensors. Then, the data are converted from the measured values (e.g. time that sound takes to travel from ship to seafloor to ship) into water depths at sea and elevations on land (another example of "turning Nature into numbers.") Then the measured depths and elevations for the entire globe are merged, coping with overlaps and gaps. Finally, the map is generated.

Humans mediate each step along the way, designing sensors, planning and executing data acquisition expeditions, analyzing individual data sets and contributing them to global databases, and making decisions about how to display the map. Likewise, computer software mediates every step along the way, controlling the sensors and recording the data in the field, processing the raw data, merging data from multiple sources, and generating the map itself.

Notice that there is a continuous digital "chain of custody" all the way from the sensor to the final representation. The information remains in digital form, and is transferred from computer to computer at each step along the way. Humans play a critical role at each step of the chain, but the information chain does not pass directly through a "meat brain" until it leaves the representation and enters the eyes and then the brain of the end user. I think that this is the essence of what makes something a data-driven visualization, the existence of an unbroken digital chain of custody, from the first inscription to the final representation as viewed by the end user.

Although this diagram was developed for one specific data-driven visualization, it should be adaptable for other data-driven geoscience visualizations. We are calling this diagram the "expert's epistemological model" for the GeoMapApp visualization, where "epistemology" refers to how we know what we know. The expert in this case happens to be me, referring to expertise left over from my early career as a marine geologist. In other words, the diagram externalizes and summarizes my knowledge about how humanity knows what it collectively knows about the shape of the Earth's surface, both continents and oceans.

Would it be educationally useful to show students a diagram like this? Would it help them interpret the data more insightfully? Would it help them better understand the process of science? Would it be useful to ask students to craft a diagram like this for data types they are using? At what stage in their geoscience education do students need to understand where data-driven visualization come from? I don't think middle school students need this depth of understanding, but I think that PhD students in marine geology do. I'm not sure about students in the middle.

Where do Data-Driven Visualizations Come From? --Discussion

« Milk Comes from the Store; Data Comes From the Internet       Universal versus Conditional Truths »