Faculty Professional Development by means of Case Based Reasoning 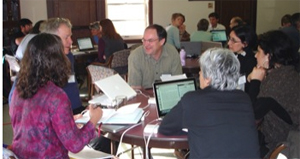 Small group discussion at SERC Complex Earth sysetms workshop
I've now been to five workshops in the "On the Cutting Edge" series of professional development workshops for college geoscience faculty (this one, and this, and this, and this, and this). I've been amazed and somewhat bemused at how well they work. People show up, they contribute genuinely good teaching ideas, they ask seriously probing questions of the expert speakers, new ideas get generated through small group discussion, and then people go home and actually make use of ideas from the workshop in their teaching practice. I'm not the only person who really likes these workshops: as of about a year and half ago, 1400 geoscience faculty from more than 450 geoscience departments had participated in Cutting Edge workshops (Manduca, et al, 2010).

In contrast, many of my colleagues concerned with the quality of science education in other disciplines moan and groan about how hard it is to get college faculty to pay attention to research on learning or to change their teaching practice. So how--by what mechanism--does the Cutting Edge approach work? Here's an idea.

I've been reading about "Case-based Reasoning (CBR)," which is a model of how humans and other intelligent agents learn new stuff. In CBR, a person draws from multiple experiences or instance of something, and combines bits and pieces from the multiple experiences, in service of solving an immediate and personally relevant problem. CBR is a form of learning by analogy; in the analogy literature, it would be called abstracting the schema or structure mapping from multiple examples (Gentner & Colhoun, 2010). CBR doesn't present itself as the only way that people learn, but as one way of learning that is demonstrably powerful.

At the center of CBR are a set of compelling and vivid "cases." Janet Kolodner writes:

".... a case is more than just an instance or an example; it is the interpreted representation of a real experience. Thus, it includes a sought-after goal, a method for achieving the goal or solution to the problem, and the results (outcome) of carrying out that method (solution), all of this described specifically." (Kolodner, 1997, p. 59)

For the Cutting Edge workshops, the learners are the participating faculty, the compelling problem is why aren't my students learning all that I am trying to teach them. Reflection, collaboration, and reporting-out to co-learners are part of the process of generating the "interpreted representation" of a real experience.

One kind of pedagogical support for case based reasoning is a "case library." A case library is a place where learners can "... find annotated examples that can help them move forward with their reasoning" (Kolodner, 2006, p. 300). For the Cutting Edge workshops, the case library is the collection of teaching activities that the participants contribute before the workshop and perhaps modify during and after the workshop. The template into which participants enter their teaching activities forces the participants to create an "interpreted representation," insisting on information about how the activity is situated in the course, who the audience is, and so on, all "described specifically." (View example template here.) Having all of the cases laid out in the same format is important, because nearly matching analogs are the type used "most extensively, easily and successfully by people" (Kolodner, 1997, p. 58).

Another relevant point from the research on CBR is that:

"....research shows.... that students who authored cases in the case library learned more than students who just used the cases for advice... The activity of authoring cases can serve as a vehicle for promoting the kinds of reflection on experience that CBR's cognitive model tells us is important for learning from experience." Kolodner et al, 2006, p. 301

As prerequisite for participation, Cutting Edge attendees are required to contribute something, a teaching activity, a reflective essay, or some other artifact arising from their own experience. Thus everyone becomes a case author.

Cutting Edge workshops are already following most of the major ideas found in the literature on CBR, but there is one thing that CBR stresses that I haven't seen at Cutting Edge. That's the value of learning through failure, because failed reasoning (or failed design) provides a focus for new learning. Case studies of failure are a staple of CBR in business and medicine (mistaken diagnosis, failed business). Rather than encouraging workshop participants to recount only their most successful pedagogical innovations, perhaps there would be some value in having them analyze pedagogical approaches that seemed like they should work but did not.

Kip Ault (1998) describes something very similar to case based reasoning in the course of articulating "criteria of excellence" in geological inquiry. One of his criteria is "the necessity of ambiguity." He asserts that earth science makes progress by comparing and contrasting multiple instances of phenomena. He uses deep sea fans as an example, a choice that resonates with me from my early work on the Mississippi Fan. Because each instance (e.g each fan) had a different history, it differs in important details. Thus the definition of a class or taxa within the descriptive vocabulary of the field must be somewhat loose and ambiguous. If it were ultra-precise, then each category would have only one individual in it, and compare and contrast would be useless.

If Ault is correct in his description of compare and contrast across cases as a central means of establishing the ontology of our field, then geoscientists may be especially open to case-base reasoning when we encounter it in a professional development context. Would the Cutting Edge system work as well among practitioners of a more reductionist science?

As geoscientists, we are accustomed to the notion that any single observation can result from a combination of multiple causes. The observation that the Cutting Edge workshops are effective is no exception, and thus we should expect that Case Based Reasoning may not be the only process or mechanism contributing to Cutting Edge's success. Macdonald et al (2004), Manduca et al (2004) and Manduca et al (2010) have reflected on what makes these workshops successful, including: focus on a specific previously-underserved audience (geoscience), focus on a specific topic, target different stages in the career trajectory separately, leverage the power of the web to share ideas and resources before and after the workshop, build in multiple opportunities to have participants actively engaged and contributing, build in opportunities to develop leadership for future workshops, and evaluate continuously and then pay attention to the evaluation results. I totally agree with the importance of all of these factors--but I am also intrigued by the possibility that case based reasoning could provide the cognitive underpinnings that support the success of some aspects of the Cutting Edge process.

Faculty Professional Development by means of Case Based Reasoning -- Discussion