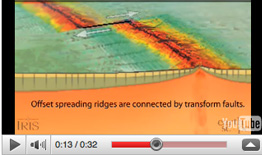 Click here for runnable version
Far and away the majority of animations of earth processes are concept-driven. For example, transform fault motion is illustrated conceptually by an animation on the IRIS website. Like static concept-driven visualizations, this concept-driven animation makes it [relatively] easy to see phenomena that are important in the curriculum, for example the relationship between offset direction and slip direction.

Click here for runnable version
But real-world transform faults are much messier. Bill Ryan has created a series of animations of the Pitman Fracture Zone, a long-lived, long-offset transform fault on the Pacific Antarctic plate boundary. Bill and colleagues began by collecting a high resolution data set of bathymetry and magnetic anomalies on both sides of the transform fault and fracture zone extensions. They then back-tracked the seafloor-spreading in steps determined by the magnetic anomalies, digitally sliding the seafloor back along flowlines and correcting the water depth for subsidence with age. Then they combined reconstructed seafloor shapes of different ages into an animation. The animation shows 10 million years of seafloor spreading in 50,000 year steps.

As was the case for data-driven and concept-driven static visualizations, I think the two types of animations both have value.

Concept-driven animations, like concept-driven static visualizations, are relatively easy for students to understand. They foreground processes and relationships that are pedagogically important. In the case of the example shown above, that would be the divergent motion of the crust on the two sides of the spreading center, and the fact that transform motion on a ridge-transform-ridge plate boundary is opposite to the direction of offset. The relatively simple shapes and motions may be easier to incorporate into a mental model than the more complex shapes and motions of a data-driven animation.

Data-driven animations, on the other hand, present richer, more detailed and arguably more accurate representations of motions that actually happened (or are believed to have happened) at specific times and places on earth. They are harder for students to get their minds around--but on the other hand, they show the true complexity of the real Earth and real Earth processes. This includes structure and processes that are not typically included in the Geo 101 worldview, for example the transform-parallel bathymetric ridges in the Pitman FZ animation.

The vast majority of animations available for earth science instruction, especially those that accompany textbooks, seem to be concept-driven animations. I think an ideal education would have a balance of both. But I think more work is needed to develop good pedagogical frameworks and lesson plans to help students benefit from, rather than be overwhelmed by, the complexity of data-driven animations.

The lack of middle ground has always annoyed me: animations based on simplified real data, smoothed out to take away many of the real-world quirks & exceptions while still more conceptually complex than "A slides past B."

I moved from physics to geophysics after I already knew how to learn, was perpetually frustrated at the plethora of resources were written for novices still sorting themselves out or for expert-specialists with a shared educational background, but very little for high-level experts transferring sideways from a related field. Now I've realized just how common the physics-geophysics shift is, I'm even more puzzled that hybrids between novice-concept-level animations and specialist-data-animations are so rare.

The differentiation between concept-driven and data-driven models (animations or other graphics) could not be more starkly defined than when I worked a project where we were required to take our conceptual models and create finite element models to address specific engineering concerns. Something that started off as a napkin sketch had to be retrofitted to match the real-world data set, as close as possible. The effort to cross that boundary was challenging, but the results and findings were well worth it and led to insights that were beneficial to the project.

On a slightly different topic, I've seen a number of conceptual animations regarding salt tectonics. Facilities like the JIP-funded Applied Geodynamics Laboratory at the University of Texas work on projects where scaled models are built and a plethora of data is gathered to try and better understand the drivers and responses for mobilization of that crazy stuff called salt. I suspect the salt tectonics realm would yield many examples for both data and concept-driven models.

The issue of professionals coming into geosciences when they already are scientists is interesting. I like the way you put it: you already knew how to learn.

We have a course in our department at Lamont-Doherty called "Advanced General Geology" which is explicitly designed for doctoral students coming in with degrees in something else, typically chemistry or physics, occasionally engineering, math, or something even farther afield. It teaches the basic solid earth topics that you would find in a Geo 101 course, but at level that assumes you can already read primary scientific literature. It mixes recent research findings and some history and philosophy of science in with the intro stuff. Here is a link to the syllabus and partial list of readings: http://www.ldeo.columbia.edu/%7Emanders/syllabus_agg_w4001x.html

I've been making a reverse switch, from geosciences into learning sciences, also as a mature scientist. One of my frustrations is that this new field uses so few data visualizations.