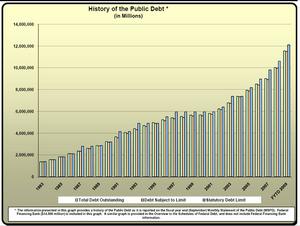 Hide
Record of the national debt. From U.S. Treasury Dept.

"Here we must speak the truth. Yes, this level of debt is unsustainable. It is also immoral. Yes, this debt is a mortal threat to our country. It is also a moral threat. It is immoral to bind our children to as leeching and destructive a force as debt. It is immoral to rob our children's future and make them beholden to China. No society is worthy that treats its children so shabbily. 'A good man leaves an inheritance for his children's children', Proverbs reminds us. For too long, Washington has been ignoring this time-honored principle. These are the remarks by House Speaker John Boehner (R-OH) to the National Religious Broadcasters Convention, Nashville, TN as delivered February 27, 2011. In preparing this speech, it is clear that Speaker Boehner is concerned about long-term impacts of our country's current spending practices, is worried about unsustainable budgetary policies, and advocates for a sense of responsibility to future generations. Implicit in these remarks is an understanding of the consequences of exponential growth, the ability to conceptualize really big numbers, and rationalization of competing rates of inputs (revenues) and outputs (expenditures) that lead to systemic instabilities that must ultimately be rectified. The alarm surrounding the burgeoning levels of the federal debt resonates with many. But one has to wonder: why does this econo-logic not translate into eco-logic?

Let's consider the carbon budget in the Earth system. If you take a close look at the increase of atmospheric CO2 as represented by the famous "Keeling Curve", you will see that the overall form of the curve is nearly identical to the increase of the national debt over roughly the same time interval. The current CO2 level in January 2012, measured at Mauna Loa by NOAAs Earth System Research Laboratory, is 393.09 ppm—up from the ~280 ppm estimated for the atmosphere pre-industrial revolution. "Since the 1700's, human activities such as the burning of oil, coal and gas, and deforestation, have increased CO2 concentrations in the atmosphere. In 2005, global atmospheric concentrations of CO2 were 35% higher than they were before the Industrial Revolution" (from EPA Climate Change—Greenhouse Gas Emissions). And the rate of accumulation of CO2 in the atmosphere is increasing: "The annual mean CO2 growth rate was significantly higher for the period from 2000 to 2005 (4.1 ± 0.1 GtC yr–1) than it was in the 1990s (3.2 ± 0.1 GtC yr–1)" (from The Anthropogenic Carbon Cycle, NOAA Geophysical Fluid Dynamics Laboratory). Energy from fossil fuels is basically solar energy that has been converted to biomass through photosynthesis, accumulated in geologic strata over millions of years, maturated, and stored as, oil, gas, and coal deposits--a kind of "rainy day" energy fund. However, humanity has managed to literally burn through millions of years of stored energy in the past century. Expenditures of fossil energy necessarily result in burgeoning levels of atmospheric CO2, with predictable consequences to climate systems. Think of the excess loading of CO2 in the atmosphere above the benchmark of 280 ppm as being akin to the interest paid on the national debt: an added burden on the system that is ultimately unsustainable. 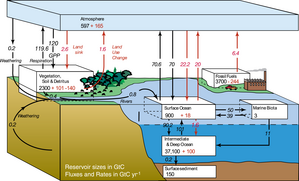 Hide
IPCC AR4WG1 Figure 7.3. The global carbon cycle for the 1990s, showing the main annual fluxes in GtC yr–1: pre-industrial 'natural' fluxes in black and 'anthropogenic' fluxes in red (modified from Sarmiento and Gruber, 2006, with changes in pool sizes from Sabine et al., 2004). The net terrestrial loss of –39 GtC is inferred from cumulative fossil fuel emissions minus atmospheric increase minus ocean storage. The loss of –140 GtC from the 'vegetation, soil and detritus' compartment represents the cumulative emissions from land use change (Houghton, 2003), and requires a terrestrial biosphere sink of 101 GtC (in Sabine et al., given only as ranges of –140 to –80 GtC and 61 to 141 GtC, respectively; other uncertainties given in their Table 1). Net anthropogenic exchanges with the atmosphere are from Column 5 'AR4' in Table 7.1. Gross fluxes generally have uncertainties of more than ±20% but fractional amounts have been retained to achieve overall balance when including estimates in fractions of GtC yr–1 for riverine transport, weathering, deep ocean burial, etc. 'GPP' is annual gross (terrestrial) primary production. Atmospheric carbon content and all cumulative fluxes since 1750 are as of end 1994. http://www.gfdl.noaa.gov/anthropogenic-carbon-cycle

A representation of the Anthropogenic Carbon Cycle, as described in the Intergovernmental Panel on Climate Change's 4th Assessment Report by Working Group One (IPCC AR4 WG1), is represented in the accompanying figure. Carbon reservoirs (or sinks) are in the boxes, and fluxes between reservoirs are illustrated by arrows (pre-industrial natural values are black, and anthropogenic values are in red; units are GigaTons carbon for reservoirs and GtC/year for fluxes). Natural systems "bank" carbon in vegetative uptake and by dissolution in the ocean system (which results in acidification, but that's another story to be told). Excess release of CO2 from a combination of combustion of fossil fuels and changes in land use patterns at rates beyond the capacity of natural systems to compensate results in the spiraling increases in the CO2 budget of the atmosphere. We are consuming fossil fuels held in natural reserves of oil, gas and coal at a rate that far exceeds the ability of natural systems to restore balance.

And whether debating the impacts of the national debt, or of the CO2 budget in the atmosphere, we are really talking about systems (economic and natural) that are far out of balance.

Now, let's return to the full text of Speaker Boehnert's remarks. In place of "national debt" as used in the original text of his speech, try inserting [profligate use of fossil energy resources, climate change, or similar phrases], and let's see what the message is:

"You may recall President Obama, in his State of the Union address, talking about a 'Sputnik moment,' the moment that shocks our generation into getting serious. In my view, America's 'Sputnik moment' is our shocking [profligate use of fossil energy resources]....our [consumption of fossil fuels] is on track to eclipse the size of [the Earth's ability to absorb CO2 from the atmosphere] this year. In other words, we're broke [i.e. we've exceeded Earth's ability to balance the global carbon budget]. Broke, going on bankrupt [i.e. unable to repay the natural carbon reservoirs at a rate fast enough to compensate for our withdrawals on time scales meaningful to human society]. Just as a bankrupt business has trouble creating jobs, so does a bankrupt country [that has mortgaged its future by recklessly continuing to consume exorbitant amounts of fossil fuels].

"Italy, Spain, Greece, Ireland – even France – face [ecological crises due to climate change leading to] social unrest. Much of [this ecological crisis] has been [promulgated] by China and Japan [as their economies demand more energy resources]. Gas prices are rising [as use of fossil fuels accelerate globally].

"[Ecologists] have laid out the nightmare scenarios we may soon confront. One is known as ['ecological collapse']. This occurs when [humanity can no longer sustain its activities due to impending ecological disasters such as extreme weather, drought, and rising sea level] causing [the cost of doing business] to rise, the [cost of mitigating environmental consequences] to skyrocket, and the standard of living to fall.

"But we are now at risk of losing a much more potent source of capital. That is the moral capital we gain from having a society that honors [a healthy environment], and protects these values for our children and grandchildren.

"Consider that a child born on this night will immediately inherit [CO2 levels in the atmosphere that will double in his or her lifetime if we do nothing to stop the current rate of emissions]. By the time that newborn is getting ready to visit colleges [he or she will be witness to natural disasters that are unprecedented in our history, and the cost of mitigating these ultimately avoidable disasters] will consume all government revenues.

"Here we must speak the truth. Yes, this level of [CO2 emissions to the atmosphere] is unsustainable. It is also immoral.

"Yes, this [reliance on fossil fuel to sustain society's energy needs] is a mortal threat to our country. It is also a moral threat.

"It is immoral to bind our children to as leeching and destructive a force as [the environmental degradation that our generation has bestowed upon them]. It is immoral to rob our children's future and make them beholden to [the excesses of our current consumptive practices.]

"No society is worthy that treats its children so shabbily.

"'A good man leaves an inheritance for his children's children,' Proverbs reminds us. For too long, Washington has been ignoring this time-honored principle.

"As part of the designs of unrestrained [consumption of fossil fuels, ultimately consumes the energy, health and safety of] our people, our most [important] resource. Through more [consumption of fossil fuels], money and freedom is drained from the people and transferred to [environmental degradation], which then [requires additional] resources [to mitigate the environmental damage that is being done to the detriment of society.]

The bottom line here is: the more [that society consumes fossil fuels] today, the more our children are forced to [suffer the environmental consequences that are related to climate change]. The damage is as much moral as it is fiscal.

Isn't it time that the same reasoning that drives the debate about the national debt be applied to the analogous issue of climate change and related environmental degradation?

In an earlier blog, Kim Kastens queried How did economists get it so wrong?, and has provided insights about exponential growth (with inspiration from M. King Hubbert) on the role of exponential growth in economic and natural systems.

See also the On the Cutting Edge resources on Rates, Fluxes and Time for additional ideas on how to teach this complex subject.

« "Some Students Will..."       A more nuanced view of Concept-driven versus Data-driven visualizations »