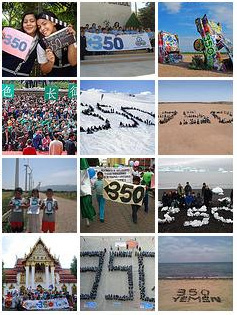 On October 24, 2009, environmental activists around the world gathered in support of a geophysical data point. With their bodies, banners, and balloons, they formed the numeral 350, advocating that governments should adopt 350 ppm as a target for atmospheric carbon dioxide concentration. How remarkable that a number should have such rallying power. How remarkable that humans are able to conceptualize the invisible stuff we live within and breathe into our bodies as a substance made of numbers. Our ability to do so is an end product of a long series of insights and inventions by our scientific predecessors.

For hundreds of year, a major activity and accomplishment of Earth Scientists and our predecessor natural historians, has been to turn experienced reality into numbers. Earth Science is sometimes dismissed as merely a "descriptive" or "observational" science, but such an attitude understates both the vastness and the power (and the pitfalls) of the enterprise of mathematicizing that which had previously only been known through non-quantitative human senses.

I can jump into a pond or the ocean and sense its temperature with sensors in my skin and describe my sensation in words: "Warm," "Not so cold, come on in," "Cold," "Icey." With the invention of the thermometer, approximately 400 years ago, it became possible to turn these feelings into numbers. Over the same 400 year stretch of time, many attributes and processes of the Earth were turned into numbers: the power of an earthquake, the height of a mountain, the swiftness of the wind, the saltiness of the ocean, the density of minerals, etc., etc.

Why was this considered a good thing to do? Why did so many people devote so much effort to inventing ingenious ways to quantify things, especially things that humans could sense with our own senses without instrumentation? And then, why did so many other people devote so much time, effort, and money to going out into nature and measuring everything? Several reasons:

On the other hand, something important can be lost when complex reality is reduced to a number. Consider three instances: 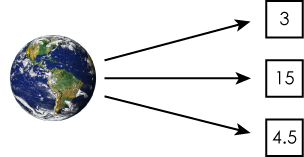 To continue with the theme of temperature, the average temperature of the atmosphere can be reduced to a single number: 15°C. This is a very powerful number: it allows us to compare and contrast Earth's atmosphere with that of Venus or Mars, to graph how atmospheric temperature has changed across geologic time, and to consider the radiation balance of the planet as a whole. But reducing the Earth to that single number obscures both temporal and spatial variations: the seasonality that makes New Yorkers shiver in winter and swelter in summer, and the spatial variation that lead to igloos in the Arctic and lanais in Hawaii.

Take a second instance: Earth's complexity reduced to "4.5," where 4.5 is the age of the earth in billions of years. Once again, this is a very powerful number: a number whose immenseness enables the theory of evolution and humbles the span of human history. Yet again, reducing the Earth to this single number leaves behind some important information: uncertainty about the possibility that the true number might be somewhat larger or smaller, and duration, the fact that the process of earth formation took a while. 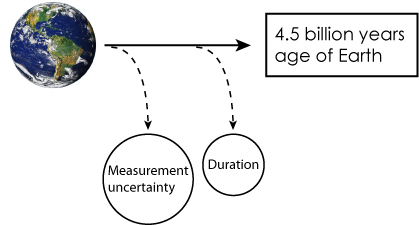 And a final example: Earth reduced to "3," where "3" is the number of the planet counting outward from the sun. In contrast to the first two examples, this mathematicization requires no loss of information. Does this make this "3" a better number than "4.5" or "15"? No, not better, just different.

How can we help students to appreciate the vastness of humanity's accomplishment of turning Nature into numbers, along with the pitfalls of so doing? I know of many activities in which students collect and interpret numerical measurements of some aspect of the Earth. But I don't know of many curriculum materials which require or encourage students to reflect metacognitively about the process of turning Nature into numbers, why we do it, what we know afterwards that we didn't know before, and how the meaning of numbers depends on their context.

I've made two stabs at this:

If you know of other examples, please share them with us in the comments.

One activity that came to mind for me was the measuring of turbidity using a secchi or a long site tube, both of which rely on a human visual assessment, and both are regularly used in stream assessments.

If you aren't familiar with "Day in the Life of the Hudson," check it out at: http://www.ldeo.columbia.edu/edu/k12/snapshotday/
School groups from the full length of the Hudson watershed go to their local patch of river on one specific day each fall and make a standard set of observations and measurements. The data are shared over the Internet and accumulate over the years, so kids can use the data to look at spatial and temporal variability in their own local environment.

The secchi disk or sight tube for measuring turbitidy is an interesting example of turning nature into numbers, because the sensor is actually a human sense, sight, but it's been augmented by a device. We have a lot of devices for augmenting human sight, but the ones that come most easily to mind are for seeing things that are otherwise too small to see (microscope) or too far away to see, in other words devices for increasing visual acuity. In the case of the Secchi disk, the device augments the reproducibility of human vision, so that the recorded value is something close to the same no matter who does the measurement.

This post was edited by Kim Kastens on Dec, 2009
A risk of turning nature into numbers emerges in Dana Meadow's book "Thinking in Systems." One of her rules of thumb for living in a world of systems in "Pay Attention to What is Important, Not What is Quantifiable."
She elaborates (p. 175-176): Our culture, obsessed with numbers, has given us the idea that what we can measure is more important than what we can't measure...It means that we make quantity more important than quality... if we motivate ourselves, and reward ourselves on our ability to produce quantity, then quantity will be the result... Pretending that something doesn't exist if it's hard to quantify leads to faulty models... Human beings have been endowed not only with the ability to count, but also with the ability to assess quality. Be a quality detector. Be a walking, noisy Geiger counter that registers the presence or absence of quality... Don't be stopped by the "if you can't define and measure it, I don't have to pay attention to it' ploy."

(Note: this comment was cut and pasted in here on 25nov09 but didn't show up for some reason, so I am re-entering it on 4dec09. KAK)

I think your post has two important lessons, but I’m not sure one of them is sufficiently mentioned.

First is that the value of a number depends on the context.

You allude to this in a number of places, but I think your Mercalli Intensity data puzzle is a particularly strong example of context. Some regard intensity as unimportant in the age of seismometers and magnitudes, but intensity is more important that magnitude for analyzing the spatial effects. As someone who lives and teaches in southeastern North Carolina, the local Mercalli Intensity from the 1886 Charleston earthquake is more relevant than a magnitude estimate.

Second is the limitation of numbers.

In my first statistics course, the first thing we were told was “The purpose of statistics is insight, not numbers.” Over time, I have come to realize that this is true of the application of all mathematics to science. E = mc**2 is a famous equation, but what is important about it is the relationship of energy and mass, not the equation itself (or any particular calculation using it) .

When math or numbers can be used, they are very powerful tools, but it’s a mistake to think that they are always valuable. About 100 years ago, geologists recognized the Grandfather Mountain Window in North Carolina as a structural feature demonstrating older rocks had moved over younger rocks in the Appalachians. There was nothing numerical about this, but it remains an important insight. Further and related to the first point, is that we can seldom get a worthwhile outcome by trying to sum up a complex situation with a single number.

Hi Martin, I agree with both of your points, especially the idea that the purpose of math is insight, not numbers.

Your vivid example of the Grandfather Mountain Window as a demonstration that older rocks had moved over younger rocks is an instance of insight coming from spatial reasoning. It seems to me that spatial reasoning often yields insights without recourse to numbers. Spatial insights in geosciences can often by refined by making them quantitative (how much older were the older rocks? how far did the older rocks move?), but the seminal insight came from thinking about spatial attributes (position/configuration/trajectory), not from thinking about mathematical attributes.

This post was edited by Avery Swearer on Jul, 2016
Another wonderful example (tongue in cheek) of the perils of overinterpreting numbers: Professor Norman MacLeod, of the Natural History Museum in London, told The Observer: "We now know that 99.9% of all lifeforms that have ever existed on Earth have gone extinct. That means, to a first order approximation, that all life is extinct."

(from Robin McKie, 8 nov 09, "Is man on course to cause the sixth extinction?", The Observer, http://www.guardian.co.uk/environment/2009/nov/08/humans-sixth-extinction )

This post was edited by Kim Kastens on Dec, 2009
Yet another example of an advantage of turning Nature into numbers arose recently in discussion with Steve Cohen, Director of Columbia's Environmental Science and Policy program. The topic was "The Sixth Extinction," the idea that the Earth is currently undergoing a loss of biodiversity comparable to the K/T boundary or other mass extinction events of geological history. Although the problem of species loss has been recognized since the 1970's, there has been minimal progress towards developing an effective system of laws, agreements and regulations to preserve or protect biodiversity.

Steve's take on this was: "First, make better observations. You can't manage for something until you can measure it."