Two years ago in this space, I wrote about "Turning Nature into Numbers," humanity's accomplishment of developing instruments and methodologies that can turn the fleeting qualitative impressions that we have of our surroundings into quantitative values--numbers--which can be readily stored, shared, transmitted and compared.

Numbers are great, but it seems to me that for developing an opinion or making a decision, humans often want categories rather than numbers. We take our numerically measured observations and apply a set of thresholds, to create levels or categories. In so doing, we toss out a lot of painstakingly measured information. For some reason, in some circumstances, we find the resulting sparse body of information more useful or satisfying than the richer body of information it replaces. 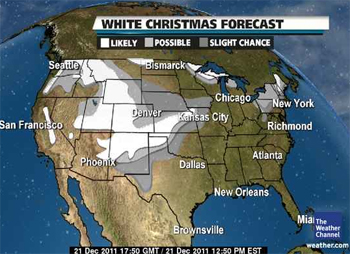 As scientists and science students we are used to thinking that quantitative measures of nature are the most informative or rigorous form of description. By this value system, a forecast of 0.9 inches or 1.5 inches, or whatever, would be superior to the two-category, threshold-based system of white/non-white Christmas. However, the two-category system latches onto the human emotional system in a way that the numerical system does not. "White Christmas" pulls forth memories and dreams; "1.1 inches on December 25" does not. 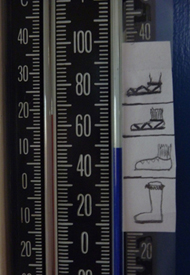 Organizing numerical measurements of nature into categories also facilitates decisions. When my daughter Holly was young, she had strong opinions about what to wear to nursery school. After squabbling too many times with her about what she was going to wear on her feet, I modified our indoor/outdoor thermometer to have a categorical scale as well as a numerical scale, with the categories of "boots," "shoes," "sandals with socks," and "sandals." After that, she would go right over to the thermometer, find the temperature category, and put on the appropriate footwear without complaint.

This decision-making by categories isn't just for four-year olds. If a "hurricane" is forecast, people tend to take a different set of precautions than if mere 73 mile per hour winds are forecast.

As you might expect, there is a literature on categorization, which I took a brief look at in writing this blog post. A interesting lead would seem to be a paper called "To Cognize is to Categorize: Cognition is Categorization" by Stevan Harnad. He points out that humans are "sensorimotor systems" and makes the case that categories determine "ways we behave differently toward different kinds of things -- things we do or don't eat, mate-with, or flee-from." This insight implies that categories are a much older and more deeply rooted part of our cognitive system than number systems, which may be why at least some people rely on categories rather than numbers for making decisions or eliciting emotions.

Comment? Start the discussion about Turning Nature Into Categories