Neutralizing the Politicization of Climate Science and Energy Policy 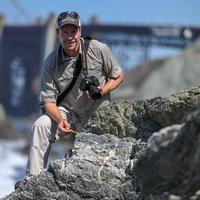 Callan Bentley, Northern Virginia Community College
Participants in this session will work together to improve their teaching of climate science in a world of unprecedented politicization of that topic. Themes to be emphasized include rhetoric (the recognition and gutting of logical fallacies and "alternative facts"), cultural cognition, the communication dilemma of story-telling vs. data and logic, and the primacy of the carbon cycle in grounding understanding of modern perturbations thereof. We will utilize materials from InTeGrate collections and publicly-available resources on the Internet from several sources. Leave with a new set of tools and perspectives ready for you to deploy in your interactions with students and the general public.

In a country where political viewpoints have bifurcated as cleanly as oil and vinegar, we need new tools for addressing contentious issues where scientific insight and public policy meet. Nowhere is this more urgent and more hotly contested than in the realm of climate science and energy choices. The scientific community has affirmed -not unanimously but fairly overwhelmingly- that humanity's ushering of carbon atoms from their former positions in sedimentary rocks to new positions in the atmosphere (and oceans) is the primary driver of a warming global climate (as well as an acidifying ocean).

Participants in this workshop want to do a better job of teaching climate science or facilitating rational discussions of energy policy options. These will include college professors who teach general education courses for non-majors and who see climate science & energy choices as one of the most tangible, real-world applications of our discipline to society. There will also be K-12 teachers who seek a way to implement the Next Generation Science Standards without accidentally fomenting a political revolution in their classes. Public outreach officials are also a target audience. If climate or energy policy come up when you interact with students or the general public, this workshop's for you. Regardless of our backgrounds and jobs, we are all residents of Earth, and have a vested interest in its habitability and the flourishing of the lifeforms it hosts, our species included. Our collective goal is clear, honest thinking about an economically and environmentally important issue that affects everyone on our planet. 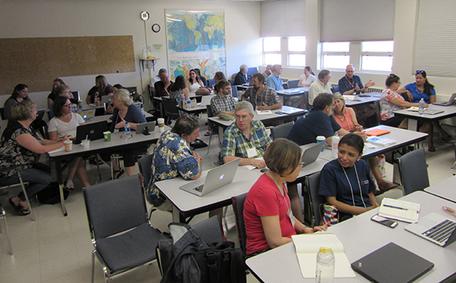 ×
Particpants at work in the workshop.

Provenance: Callan Bentley, Northern Virginia Community College
Reuse: This item is offered under a Creative Commons Attribution-NonCommercial-ShareAlike license http://creativecommons.org/licenses/by-nc-sa/3.0/ You may reuse this item for non-commercial purposes as long as you provide attribution and offer any derivative works under a similar license.

During the workshop and associated Rendezvous opportunities, each participant will:

One block of time will be devoted to a guided discussion on the psychology of human thinking on climate change. Another will focus on resources that instructors should assimilate in order to avoid communication pitfalls. A third segment will be focused on nurturing an essential understanding of the carbon cycle as a prerequisite for further discussion. A final segment explores a participatory approach for framing energy policy options as an application of these ideas.

We will "test drive" a few relevant activities from the Carbon, Climate and Energy Resources InTeGrate module (co-authored by the workshop facilitator).

See the Program Page for a detailed schedule of daily events.