A Primer on Diversity

Jump down to: Primary and Secondary Characteristics of Diversity | Why is Diversity Important? | Diversity in the Geosciences | Sources for Geoscience | Sources on Diversity Research | Read More

If you were to ask 20 people "What is diversity?", it is likely that you will get 20 different answers. Diversity is an evolving concept that is rarely defined in the research literature. On the most fundamental level, diversity means "difference." Diversity is a characteristic of groups, not of individuals. You can talk about a member of a diverse community but not about a diverse individual.

Defining diversity becomes the first challenge for any institution. Institutions should develop their own definition for diversity that is dependent on their specific needs for creating a representative pool of participants.

The idea of diversity can be further complicated and be mistaken for terminology such as equity, multiculturalism and inclusion.

Inclusion exists when traditionally marginalized individuals and groups feel a sense of belonging and are empowered to participate in majority culture as full and valued members of the community, shaping and redefining that culture in different ways.

Primary and Secondary Characteristics of Diversity 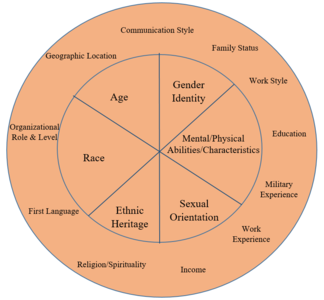 Primary characteristics of diversity are usually the most visible; for example, gender, race, sexual orientation, and age, although often these may not be apparent. The visibility of primary characteristics is critical to the assumptions made by the majority society about the presumed worth of minority group members. The values and judgements assigned to these attributes by the majority group may determine whether minority group members are accepted as full participants.

For more readings and discussion about diversity, equity and access in the geosciences, check out GeoReadingForEquity, an initiative by a number of graduate students, faculty and researchers across multiple institutions.