Jump down to: Bias in Science | How Does Implicit Bias Affect Self-Perception? | Bias in the Geosciences | Sources for Geosciences

Bias is described in Webster's dictionary as "the prejudice in favor of or against one thing, person, or group compared with another, usually in a way considered to be unfair."

Social psychology scholars have conceptualized bias as either implicit or explicit.

Explicit bias refers to the prejudice beliefs or attitudes one has towards a person or group on a conscious level. Explicit attitudes are feeling and thoughts that one deliberately believes and can consciously document.

Implicit bias are prejudices, beliefs, or attitudes towards a person or group that are not within the margins of awareness, and are thus, unconscious. Implicit bias can be difficult to acknowledge and control because it exists beyond one's conscious thoughts or feelings. Implicit bias can undermine our explicit intentions or openly-held beliefs.

As explicit forms of discrimination have become less socially acceptable over time, implicit bias continues to negatively affect the success of diverse groups, particularly those that have been historically underrepresented in science. This bias can influence the way the empowered majority group thinks and behaves, which may manifest as "microaggressive" actions. Understanding implicit bias is critical because both positive and negative unconscious beliefs can lead to structural inequity [refer to equity page].

Microaggressions are brief, everyday exchanges that send denigrating messages based on identity or group membership. Microaggressions can be verbal (spoken and written), visual, behavioral, or environmental. Microaggressions may seem small in isolation, yet are harmful because they often occur with high frequency and from multiple sources, with negative effects on people's self-esteem and health.

How Does Implicit Bias Affect Self-Perception?

Wide generalizations of groups, including gender stereotypes, are often proven to be inaccurate for individuals, yet they can negatively affect self-perception. The imposter syndrome describes the constant feeling of self-doubt, insecurity, and fraudulence despite evidence of the contrary. Essentially, imposter syndrome describes the feeling of not being "good enough" for community membership.

Imposter syndrome is felt by people from every demographic, but people of color and white women struggle with this feeling the most. Imposter feelings have been shown to negatively intensify encounters of perceived discrimination, depression, and anxiety among racial minoritized students, especially African Americans. For underrepresented groups, imposter syndrome can further muddle an already challenging career path in which feelings of having to represent one's entire gender and/or race are already occurring. Overall, bias in STEM disciplines can drive feelings of inadequacy that can become difficult to overcome. 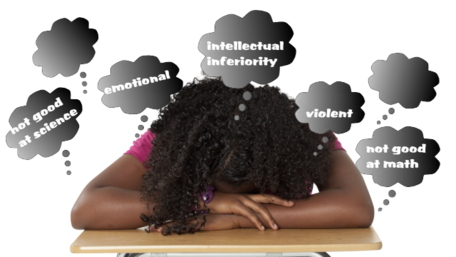 ×
Stereotype threat refers to being at risk of confirming, as a self-characteristic, a negative stereotype about one's social group. The term was first coined by Steele and Aronson in 1955 who showed in multiple experiments that Black freshmen and sophomore students underperformed on standardized tests in relation to white students when their race was emphasized at the beginning of the test. Contrarily, when race was not highlighted, Black students performed equivalently to or better than their white counterparts. The results indicate the decreased performance of one group due to the threat of their behavior being justified by racial stereotypes. Similarly, other studies have shown that women underperform on math and physics exams compared to men when gender was emphasized. However, when participants were told the test had never shown gender differences in the past, women performed equally to men, suggesting that stereotype threat may underlie gender differences in math performance.

Bias in the Geosciences

There is a bias in the geosciences towards studying gender bias and an outstanding lack of research regarding sexuality and racial biases, for example.