A large part of creating and promoting inclusive climates in your department or field site comes from one's understanding of social inequities that are present in our scientific and work communities and in our society as a whole. Addressing issues related to power dynamics, intersectionality, and privilege is critical for promote positive, productive relationships with our colleagues and students, creating a safe and respectful learning and working environments. A culture change is required in the sciences and in academia as a whole in order to transform our current workplaces into equitable and inclusive spaces.

Climate is the atmosphere or ambiance of an organization or institution as perceived by its members. An organization's climate is reflected in its structures, policies, and practices; the demographics of its membership; the attitudes and values of its members and leaders; and the quality of personal interactions.
Jump down to: Intersectionality | Privilege and Allyship | Workplace Climate | What Can You Do? | References | For More Reading

What are power dynamics?

Power is the degree to which an individual or group of people have control over resources. In academia, these resources can be material, financial, human, or intellectual. Power can be visible, for example, a department chair would visibly have greater decision-making ability than a graduate student, but power can also be more subtle, like a woman having less leverage in a mostly male department. Power dynamics is how different people with different levels of power interact with each other in a group setting. We need to recognize that relationships in academia inherently are built on power imbalances between:

Power imbalances lead to conditions that allow for the risk of retaliation, especially in professional environments and can affect whether people will report incidents of harassment or not.

How can we address power dynamics?

Hidden power can lead to exclusionary behavior that devalues the concerns and representation of less power groups. By preventing important voices and ideas from getting heard, departmental policies and decision-making can be skewed to benefit a few at the expense of others. Allowing everyone's voice to be heard, regardless of their role, is a key first step to addressing power dynamics. Being transparent about what authorities individuals in your department have as well as what procedures are in place for formal decision making will also help break down barriers and increase the level of trust in your department. Reinforcing the code of conduct that your department or workplace sets will also allow everyone to be held accountable as well as promote a culture of respect and inclusion.

Other practical strategies for minimizing the role of power dynamics in creating hostile climates: 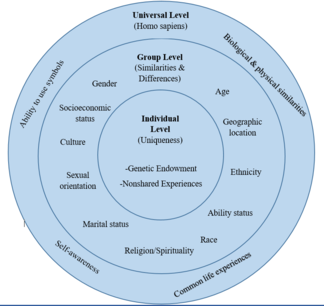 ×
Everyone has multiple identities that affect their day to day experiences (see image). Some may be privileged identities, such as being able-bodied or cisgendered, others may be more marginalized identities, such as being below the poverty line or a minority race. While it is easy to acknowledge that humans haver diverse experiences and perspectives, often we find ourselves ignoring the multiple threats of oppression and discrimination that some individuals face when their identities overlap with a number of marginalized groups. For example, while women in STEM often face discrimination and harassment, women of color face the discrimination and harassment for being a women along with being an underrepresented racial or ethnic group. Queer or undocumented women of color face additional levels of discrimination.

The term 'intersectionality' has been attributed to legal scholar and civil rights activist Kimberlé Crenshaw (1991) who demonstrated how experiencing multiple forms of social oppression affected women of color disproportionately and builds upon work by other Black feminist scholars (Mattheis and Schneider 2018). Intersectionality provides a useful framework to understand how multiple levels of social injustice and discrimination/oppression interact at the cross section or intersection of different identities (race, gender, ability, immigration status, etc.). The popular #MeToo movement that has raised public awareness of the prevalence of sexual harassment and assault across industries and launched Time's Up is currently building upon the Me Too movement founded by Black activist Tarana Burke in support of survivors of sexual abuse and assault.

Read this essay by sociologist C. Shawn McGuffey on how power dynamics and intersectionality affect personal experiences of sexual harassment.

In A minority within a minority, geoscientist Jazmin P. Scarlett writes about how being a queer, asexual, cisgender Black woman with a chronic physical illness affects experiences in the discipline. 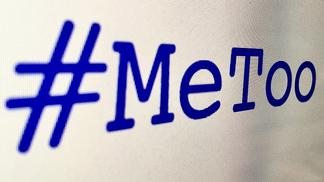 What is an ally and how can I be a good ally?

An ally is someone who chooses to act in ways that help support those in marginalized communities, regardless of their own identity or beliefs. Allies are an important resource that can not only support others, but use their position of privilege to work to reduce harassment and discrimination in their workplace. Important first steps from the Guide to Allyship, include taking on the struggle as your own but not centering the work on you, rather continue to center it on the marginalized communities you aim to support; standing up for others even when you feel scared; transferring the benefits of your privilege to those who lack it; and acknowledging that while you, too, feel pain, the conversation is not about you. Being an ally can mean stepping down and giving someone else power.

How do I talk about privilege?

While having discussions with others about privilege can be uncomfortable and can possibly lead to others (or yourself) feeling guilty or defensive, an important reminder for anyone having these conversations is that having privilege should not make you feel blamed for a trait you possess, such as race, that is beyond your control. Instead, discussions about privilege should be in the mindset of challenging the systems of oppression that perpetuate inequality for anybody. Possessing privilege isn't anyone's fault and it does not diminish your accomplishments; however, ignoring or denying the existence of privilege only perpetuates patterns of oppression that can lead to harassment and discrimination in your workplace.

For more information and lessons about privilege, please refer to Institute of Human Education Videos for Introducing Privilege (link unavailable).

Privilege in the geosciences, as in any field or experience, can take many forms. For example:

Your department or program may want to consider conducting a workplace climate survey.

What Can You Do?

We address many strategies that contribute to more inclusive workplaces in our Responding to hostile behaviors resource page. Here we highlight other efforts: