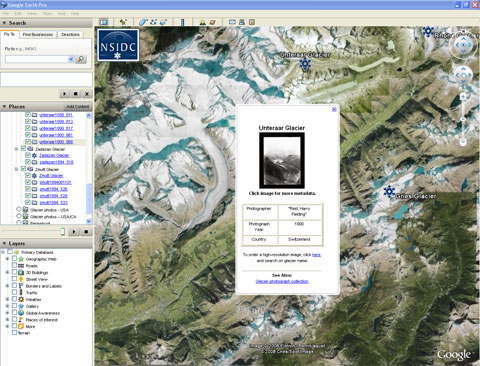 Google Earth can be used:

Google Earth offers the means to display geographic data from a wide variety of sources together in a geospatial context. This data includes imagery for the entire globe at varying resolutions that contains a great deal of interpretable visual information. Students can use it to find their homes, schools, and other locations that are familiar to them. They can make inferences by comparing familiar places to other locations. In addition, students can learn about the world through rich layers of mappable data offered by Google's server and a great deal of third-party content. They can also create and display their own data.

How Educators are Using Google Earth

Many examples of how educators are using Google Earth are documented on the web. Following are some of those examples, and some articles.

Peter Selkin has written an excellent article on Google Earth and Geoscience Education.

Declan DePaor at Old Dominion University is having students create a collection of Google Earth teaching materials entitled Google Earth Science. This set of materials includes KMZ files that represented various types of tectonic plate boundaries, mountain belts, volcanoes, and other geological features as cross sections, and includes a profile of the atmosphere and Earth's magnetic field. Cutaways also represent the three-dimensional structure of the Sun, Mercury, Venus, Mars, the Earth, and our moon.


Students in Dr. Christine Erlien's writing course, The View from Above: Google Earth's Impact, at Duke University, created a blog in order to share their knowledge of how Google Earth can, and is, impacting education. Their work can be found at Teaching (and Learning) with Google Earth.

The University of Alaska Fairbanks offers a course Geog493: Exploring the Virtual Earth that teaches students how to use Google Earth, and offers introductory KML exercises.

At Middlebury College in Vermont, the Food Mapping project is helping students understand how their meals relate to the Earth system. They can trace the ingredients for several types of meals back to their sources.

In his post to the Google Earth Community Forums, Antarctica with ANDRILL, Ken Mankoff is making data from Antarctica available for educational use in Google Earth.

A Google Earth Community member who uses the name gangof4 started a thread Any other college profs here who use GE in the classroom. Replies from other educators have described projects that include:

Investigating wind energy with Google Earth engages students in assessing the suitability of a site for a wind farm after considering arguments for and against using the site for that purpose.

A group of educators in New York State have developed New York Landscape Regions in Google Earth. This consists of a collection of datasets containing placemarks and overlays of USGS topographic maps for sites throughout the state, organized by physiographic region. The collection is primarily designed for high school Earth science classes, but can also be useful for introductory college geoscience courses. The project can serve as a model for datasets for other states.

Juicy Geography has a lesson on Modeling sea level change on the Gold Coast of Australia.

Real World Math has lesson plans for pre-college classes that use Google Earth to teach mathematics.


Google Earth can support field studies by importing GPS data that has been saved in GPX format. GPS Tracks are represented as paths in Google Earth, and waypoints become placemarks.

Google Earth data is in the form of KML (Keyhole Markup Language), which is an XML-based text format that can be edited directly in a text editor. Data created in Google Earth can be saved in KML format or in a zipped format known as KMZ. Because KML is a text format, spreadsheets can be used to create KML from data in tabular format provided that it contains latitude and longitude information in a systematic manner. Learning to edit or create KML directly outside Google Earth allows more flexibility than being restricted to the Google Earth user interface to create the data. To learn more about KML, see KML Documentation Introduction.

When exploring places in Google Earth, students should make it a standard practice to look for points in the layers that in that location. They should learn to look for relationships between information from varied subject areas in order to develop an interdisciplinary thinking perspective.

Prior to conducting a school field trip for any purpose, educators should add value to the experience by enriching the students' geographic perspective of the landscape they are about to traverse. The students should be given an opportunity to explore the route on Google Earth in order to develop a conceptual geographic context for the landscape that they are about to travel. They should be encouraged to investigate layers that contain information about places along the route.

Google Sketchup is a companion program to Google Earth, also available for free download, for creating, modifying and sharing 3D models of buildings, bridges, and other structures. The models can be added as data for display in a geographic context in Google Earth's 3D Viewer.

See the Google Earth User Guide for information about the techniques of using Google Earth.

Formative assessment is an essential part of the educational process. In the computer laboratory, the instructor can observe the students directly as they engage in activities. Discussions during and after the activities provide constant feedback to the instructor, and student responses can reveal whether the students are learning what is intended. During the activities, the discussion can be modified toward mitigating any problems in understanding that are discovered during the discussion. If any of the difficulties in achieving the learning goals are caused by shortcomings of the instructional materials, they can should be modified to address these problems for the benefit of future classes. Instructors who use these activities in their classes should be provided with a means of communicating with each other, so that they can use each other's experiences with their classes to upgrade the teaching materials. This information should also be communicated to the groups who host the materials on the web or otherwise disseminate it.

Students should be expected to hand in the results of their work either electronically or in hard copy form. If the activity involved creating any KMZ files, they should be submitted electronically so they can be viewed in Google Earth. This can also enable the instructor to determine whether the learning goals have been met.

For K-12 educators, the National Science Teachers Association has posted a review of the book Science Formative Assessment by Page Keeley, published by Corwin Press, Thousand Oaks, California in 2008.

Google Earth as a Research Tool


In addition to its value for classroom education, Google Earth is an effective tool for making data available for research purposes. For example, the United States Geological Survey distributes stream gage data in KML format on the Google Earth Streamflow KML Files page of its WaterWatch site. The Great Basin Center for Geothermal Energy makes a favorability map and temperature gradient data available for viewing in Google Earth at the bottom of its GIS Regional Spatial Data Download page. 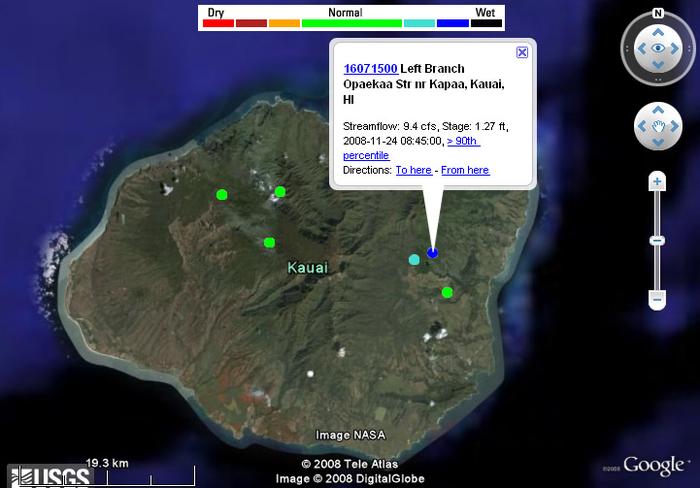 
Four sessions at the 2008 Annual Meeting of the American Geophysical Union are focused on Visualizing Scientific Data Using KML and Virtual Globes.

Good Places to Get Data for Educational Use

Google maintains a KML Gallery with a wide variety of data on world oil consumption, a geologic atlas of the United States, rising sea level, population density, travel information, economics and other topics.

Many of the posts in the Google Earth Community Forums have attached KMZ or KML data files. For an example, see the thread Arctic Sea Ice at another record low. Many posts to threads provide links to external sites that also offer data in KMZ format.

Google Earth Hacks contains a collection of data submitted or located by users.

Steve Kluge's Google Earth Tools, Tours, and Placemarks, Earthcaching Links is nice collection of data and other information for educators.

GPS Visualizer offers online tools for preparing GPS data for use in Google Maps and Google Earth. The tools can create maps with a choice of a variety of backgrounds, including Landsat imagery, topography, and political boundaries.

Google Sightseeing has data classified by topic for use in Google Earth and Google Maps.

Ogle Earth is a blog with links to data and information about Google Earth and other virtual globes.

Google Earth is periodically updated to incorporate new functionality, and people are continually developing new data and finding new uses for Google Earth. The following sites are good sources of information about these developments, and it is a good idea to visit them regularly.

The Google Earth Community Forums are online discussions about Google Earth and many Earth-related topics. They are intended for sharing information about places, events, and techniques, and for exchanging data. You can join the Google Earth Community by registering and specifying a login name, password, and other information in an online form. Thereafter, you can initiate discussion threads or reply to posts in existing threads. Before submitting your first post, become familiar with existing ones, including the announcements and "sticky threads" marked by a push pin at the top of the index for each forum. Avoid submitting posts that essentially provide information that has already been posted.

Posts to the Google Earth Community Forums can have a KMZ, KML or zip file attached. The KMZ and KML files are intended to be opened in Google Earth or Google Maps, and the zip files can be offered as archives that contain other file types, such as Word, PowerPoint and image files.

In order to include images in the body of a post to the Forums, you must upload the images to a server such as Flickr or ImageShack and reference them from there. In most cases, image hosting services request or require that images embedded in forum posts or in pages on other servers function as links back to the host. In the case of Flickr, embedded photographs need to specifically link to their photo pages.

The Google Earth Blog by Frank Taylor offers Google Earth news, commentary, and tips. The news often consists of notifications of imagery updates, for example. Frank is currently sailing around the world and using Google Earth to guide and document his trip.

Stefan Geens offers the Ogle Earth blog, which provides news about virtual globes, with a primary focus on Google Earth. 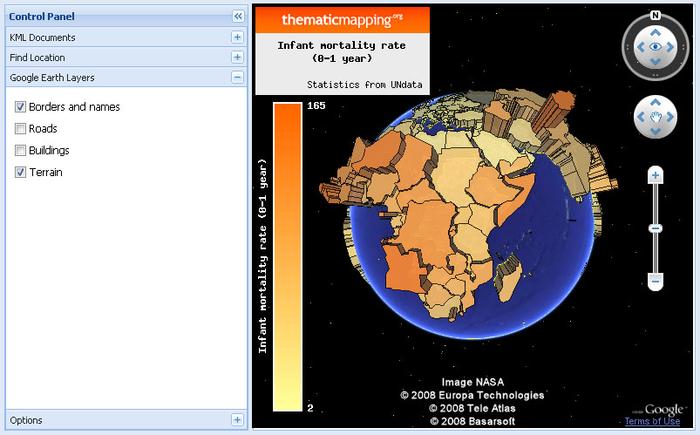 This infant mortality map includes a control panel and was developed using the Google Earth API. The map is available on the Thematic Mapping Blog.

Juicy Geography, by Noel Jenkins, is a collection of ideas, lessons and resources for teaching geography

Google Earth Design is a blog that offers advice on how to use Google Earth, tips on map design, and commentary on the design of Google Earth KMZ data that is available on the web.

An effective means of keeping up with Google Earth developments is to attend or consult the literature or web content for meetings. Regularly occurring events that focus on geobrowsers are offered at meetings of the Geological Society of America and the American Geophysical Union.

Google allows non-commercial personal use of the images created from Google Earth, provided that copyrights and attributions are preserved. Works created by an agency of the United States government are public domain at the moment of creation. This means that those images can be freely modified, redistributed and used for commercial purposes.