Why Teach With Google Earth?

Jump down to a discussion comparing Google Earth Pro with GIS 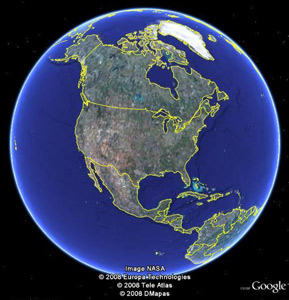 Google Earth Pro:
Google Earth is easy to use and presents, in a visual geospatial context, a great deal of information that applies to topics that are addressed in geoscience courses and many other educational settings. By offering the ability to place this information in combination on a three-dimensional model of the Earth, it can facilitate understanding of the Earth system and the many subject areas that comprise it, ranging from natural sciences to social sciences, history, art, engineering and any other topic that has a geographic component. Information that can be displayed on Google Earth includes aerial and satellite imagery, the numerous layers offered by Google's database, and a huge amount of data made available by the Google Earth Education and on many other third-party web sites.

With Google Earth, students can browse casually on their own or engage in structured inquiry-based explorations individually or in teams. Since Google Earth Pro is available to download for free for all the major operating systems, students can use it in school as well as for homework or fun. They can easily create their own data and save the information in KMZ data files, or as saved images for incorporation into oral presentations or reports. This data can be rendered on maps in combination with any other data made available to the students.

In addition to making it available for students to use for inquiry-driven activities, educators can employ Google Earth Pro directly as a presentation tool for classes or as a means of saving graphics for use in lectures. They can also use it to research topics for use in a variety of educational venues that incorporate electronic presentations, or printed materials that include maps or other graphics. Google Earth Education presents advice on how to use Google Earth in educational settings.

In addition to its educational utility, Google Earth is a great research tool. The imagery itself contains a great deal of information about the natural landscape and human infrastructure on the Earth's surface. The constantly growing Street View layer adds dimensionality to this imagery by offering a dense array of 360° panoramic photographs for many cities, towns, and other places around the world. The terrain and 3D Buildings layers also contribute information to the three-dimensional Google Earth experience. The other Google Earth layers offer a wealth of additional geographic information. Many web sites, including the Google Earth Community, offer data designed specifically for use in Google Earth. There are also much data, including imagery and vector data that can be adapted for use in Google Earth even though it was not created for that purpose.

Google Earth, due to its ease of use, can become a standard part of everyday discussion in the classroom. For example, if a question about a particular coastal feature or hurricane arises during a course on coastal processes, Google Earth can provide a quick look at the appropriate aerial imagery or plotted hurricane path, especially if the instructor or an enrolled student is familiar with the body of data that is online and available for access.

While Google Earth is an excellent teaching tool, it does not offer the analytical capabilities of a full-featured geographic information system such as ArcGIS or QGIS. Alan Glennon wrote two essays, in favor of and opposed to, respectively, the practice of promoting Naive Geography, the field of study that is concerned with using formal models of the common-sense geographic world in the classroom. In Comments Supporting Naive Geography, Glennon argues that "Incorporating common sense conceptions of the geographical world into GIS will make the software more usable, thus adding meaning and value. As multibillion dollar companies like Google and Microsoft formally declare that they are designing spatial software to be understandable and usable for regular users, the impact of the naive geography design philosophy is becoming unmistakable". However, in Comments Against Naive Geography, he points out the dangers that people may develop overly simplistic conceptualizations, that they may be frustrated by finding geographic software less capable than what they expected, and that simplified software may hinder creativity on the part of the user by offering reduced opportunity for control in comparison to GIS software.

While these essays do a nice job of presenting opposing views, when considered together they make the case that Google Earth and GIS each have important roles in education and research. In order to mitigate the hazards of using one approach exclusively, and to gain the advantages of each, educators who engage students in using Google Earth should provide students with a sense of how its small set of analytical capabilities differs from those of a full-featured GIS. In courses that include a relatively small amount of map use that does not require a great deal of analysis, Google Earth is generally the best choice. This can be followed by a discussion or demonstration of what GIS can do. However, instructors who include multiple map-oriented exercises in their courses can base at least one of them on GIS, with the inclusion of some analysis that utilizes spatial attributes or other properties of the data, if appropriate for the course material. See Teaching with GIS in the Geosciences in order to compare how using GIS for education differs from using Google Earth.