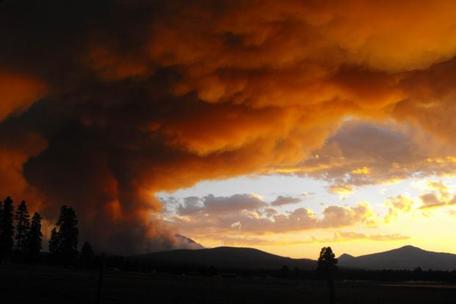 The number one cause of death when it comes to fires is smoke inhalation. Smoke inhalation damages the body by asphyxiation (lack of oxygen), chemical irritation, or a combination of the two. Smoke itself can be harmless to you but it takes up the space needed for oxygen, similar to carbon dioxide. Smoke inhalation is especially dangerous because people may not show symptoms until 24 to 48 hours after the event. An estimated 50-80% of fire deaths are from inhalation, not burns.

All smoke contains soot or particle matter, carbon dioxide, and carbon monoxide. Smoke can contain many different other chemicals as well. The type and amount of chemicals and particles found in smoke varies depending on what is burning, how much oxygen is available, and what temperature the fire is burning at. Depending on what causes the fire, smoke can contain chemicals such as benzene, toluene, styrene, aldehydes, acid gases, nitrogen oxides, sulfur dioxide, and metal and dioxins. Smoke inhalation can cause serious health issues depending on how long the person is exposed. Here is a good site on fire and smoke information at NYC Health-Fire, Smoke, and Air Quality

Fires can occur almost anywhere. There are forest fires, electrical fires, gas and oil fires, and many more. Whether fires start from throwing cigarette butts out or accidents, most fires are human related. The intensity of fires depends on what is fueling it. Forest fires are usually classified into three different sources of fuel; ground fuels, surface fuels, and crown fuels. Ground fuels include the vegetation lying on the ground such as grass, dead leaves, logs, pine needles, etc. Surface fuels are often referred to as "ladder fuels" because they are the low hanging branches and shrubs around the bottom of the trees. Crown fuels are the tops of the trees and any other surfaces that do not touch the ground. Crown fires usually require a helicopter because they cannot be reached from the ground. 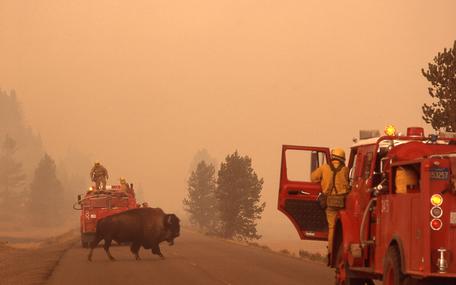 Transport of Smoke and Ash

Smoke from controlled fires does not usually have much effect on air quality because they produce an inconsequential amount of gases. However, particulates are cause for concern because they reduce visibility. The type of fuel consumed, rate of fire spread, and fuel moisture all play a role in the amount of particulate in the air. Wind and atmospheric stability contribute to the spread of smoke as well.

Wildfires cause soil nutrients to be depleted and prevent watersheds from capturing water. This puts a lot of stress on wildlife and vegetation in the area of the fire. Unseen particles and polluting gases can travel upward into the global air currents and be carried away. This can contribute to smog problems in distant places.

Polycyclic aromatic hydrocarbons (PAHs, also known as polyarenes ) are the product of incomplete combustion such as forest fires, diesel and cigarette smoke, and combustion of fossil fuels. When these PAHs are produced naturally, they can be broken down by microorganisms. Contaminated sites can also often be contained and repaired through microbial and environmental manipulations. These are potentially carcinogenic and because of their bioavailability, humans are almost always at risk for coming in contact with them in the air, water, soil, and sediment. Smoke is produced from fires and enters the food chain via the air. Particulates in the air are harmful to birds that fly with their mouths open to feed in insects. Soot often covers vegetation which deters the survival of insects. The acid pollution in rivers and lakes prevents fish and other aquatic life from surviving. 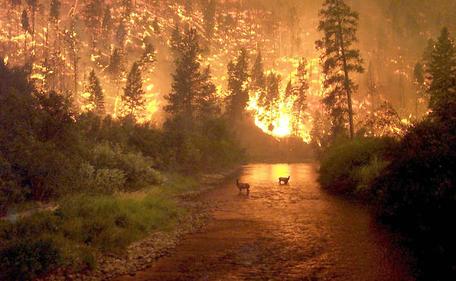 Over 90% of emissions from fires are small enough to enter the respiratory system. Inhaling carbon monoxide decreases the body's oxygen supply. Fine particles in the air are able to travel deep into the respiratory tract and cause shortness of breath or worsen pre-existing medical conditions such as asthma. Woodsmoke exposure can depress the immune system and damage the layer of cells in the lungs that protect and cleanse the airways.

How smoke may affect your health depends on a number of variables such as how long you were exposed, your age and current state of health, the type of smoke you are inhaling, and the concentration of the smoke in the air etc. People who are exercising or doing an activity that causes them to breathe more rapidly and deeply are at a higher risk for health issues. Children, elderly people, others with pre-existing health conditions such as asthma, chronic bronchitis, and emphysema are also at a higher risk since they are more susceptible to the harmful effects of smoke inhalation. Long term exposure to air with particles has been associated with increases in risks for cancer, lung disease, and cardiovascular disease. Short term exposure typically only causes throat, eyes and nose irritation.

In order to help prevent health issues via smoke inhalation, stay in a place where there is as little smoke as possible, such as a house and keep all doors and windows closed. Limit outside activities to as little as possible. Air conditioners in houses and cars should be set to "recirculate" air and people with pre-existing health issues should consult a doctor. If you cannot avoid the smoke, use necessary precautions such as respiratory protection.

Man-made fires should not be burned on windy days. Every year, countless acres are burned because of human carelessness. Fire breaks should be used to prevent fires from spreading to where they are unwanted. This also provides a safe area for the operator to access the perimeter of the fire safely. Prescribed forest fires can help reduce the risk of wildfires and also help the forest's ecosystem to prosper. 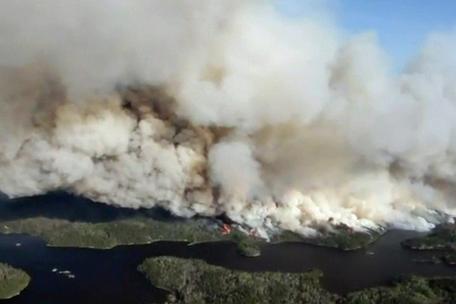 Hide
An aerial view of a forest fire at Lake Kirkland in Ontario, Canada. Photo courtesy of http://www.citytv.com/toronto/citynews/news/local/article/206864

Forest fires: Burn Out provided by Nature, an international weekly journal of science Nature: Forest Fires This site discusses western fire issues along with damages to the ecosystems via climate change and insect outbreaks.