Photo credit for B Reactor

Since humans first started working with nuclear processes, we have had the problem of safely storing and containing the tailings of these. The Hanford Site, ran by the Department of Energy, has thought of and is currently building a 65 acre facility to take care of this very large problem.

The problem with leftover materials from this site is that it contains mass quantities of radioactive materials. The current methods of storing these materials, both liquid and solid, are outdated and obsolete, opening the risk of leaking and contaminating other materials, including groundwater used by nearby municipalities.

Plutonium, the main solid waste material on the site, is created in nuclear reactors. Uranium-238 absorbs a neutron while the reactor is running, and becomes uranium-239. This ultimately decays to plutonium-239. In all, the U.S. government produced about 100 metric tons of plutonium, and roughly 100 million gallons of exceedingly hazardous waste.

Here is a great site from the Centers for Disease Control explaining more on radiation.

Why is this a problem?

We have, as a country, been storing an untold amount of nuclear and nuclear byproduct waste underground for many years. The problem with this is, that until now, this has been leaking, and will continue to leak for as far as we can see into our future. This will contaminate and untold amount of soil, and most certainly the ground water near to these facilities. The biosphere around these site will undoubtedly take up these contaminants, and propagate them all the way up the food chain. This in unacceptable by any of today's standards.

We, as humans living on this Earth, are exposed to low concentrations of plutonium left over from atmospheric testing in the 50's and 60's. The fallout left low levels in and on soils all over the earth. Sites like the Hanford site, only increase the amount of radioactive wastes that we can be exposed to. Since we are exposed to low levels of radiation every day, any excess exposure is obviously a very bad thing, as we can only handle so much before the adverse effects are seen.

How does it affect us? 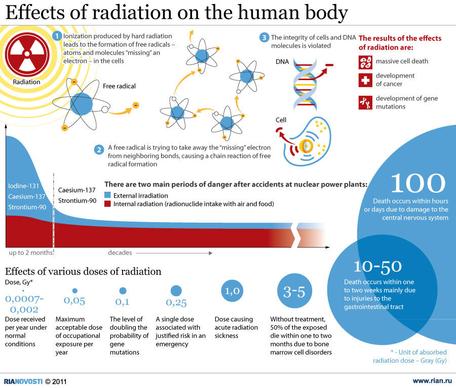 Radiation can and does affect multiple areas of everyday lives. From making us sick, to literally ripping apart DNA at its smallest levels, radiation can have drastic effects on the human body over time. In small doses, it can go unnoticed for years (i.e. low level exposure from contaminated drinking water). In large doses over a short period of time, even just a few minutes, Acute Radiation Syndrome can come on quick, and the death from this exposure can take anywhere from 2 to 4 weeks.

Plutonium is not absorbed in the stomach very well, and most that is swallowed passes from the body. When inhaled, plutonium can stay in the lungs for a very long time. Any that is absorbed into the blood stream, is deposited into bones or body organs, and can remain in the body for decades and expose the surrounding tissue to radiation.

Where did it come from on this site?

This site currently contains 56MILLION gallons of radioactive and chemical waste left over from WWII and the Cold War era.

B Reactor: Code names 105-B during WWII, this reactor was the worlds first full-scale nuclear reactor. It is one of the most historically significant building on the site, and produced the plutonium used in the bomb dropped over Nagasaki, Japan in 1945.

C Reactor: Built in the 40's and 50's, this reactor began production in 1952. It was the sixth reactor built, and was shut down in 1969. The reactor itself was encased in concrete in 1998, mitigating the radiation that workers on the site would be exposed to, and thus increasing work efficiency while decreasing costs associated with workers health.

Every 5 years, the reactors are tested to make sure that no radiation has leaked out, and that nothing from the outside is getting in. Reactor C has passed all of its tests to date. 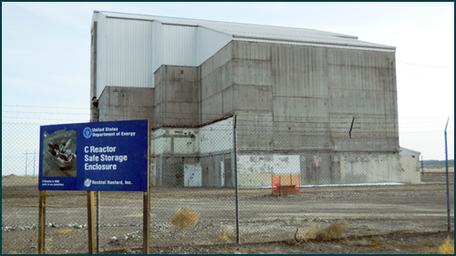 The Hanford site, part of the Department of Energy and ran by Becthel National Inc., are currently building facilities to take liquid nuclear waste, and through a pretty complex process, turning that into a type of glass, which can be safely and efficiently stored underground without the problem of leaking into the surrounding soils and groundwater. This is a first of its kind waste processing facility. It covers 65 acres, and is home to one of the largest environmental cleanup efforts in the world.

The process of vitrification is accomplished by mixing the waste that has been separated from contaminated pools, and combining that waste with glass forming materials at very high temperatures. At 2100 degrees F, the materials bond together, and the newly formed liquid glass is deposited for cooling into stainless steel containers that will weigh in from 4 to 7 tons. The cooled waste will be buried at two separate sites, and since they are now in a solid form, the threat of leaking is little to none.

One of the waste collection sites, the Environmental Restoration Disposal Facility, is charged with the storage and containment of low level nuclear waste from the Hanford Site. It does not accept any off site waste. It is made up of "cells" that are line with impermeable materials and a system to collect water that drains through the materials from rain and snow. This water is collected, sent to a treatment facility, and then released back into the ground water. This site explains that this ground water is "clean enough" to release the water back into the ground water with no adverse side effect. What this tells me is that no matter how hard they try, the water still isn't perfect. However, exact statistics on radiation level in treated water were not able to be found.