This web page provides information about the different types of radiation, where they come from, how they can impact your health, and what you can do to lower your chances of radiation exposure.

Energy that comes from a source and travels through material or space is called radiation. Radiation occurs in atoms when the unstable nuclei decay and release particles. Ionized radiation occurs when an atom loses an electron and becomes unstable. Unstable atoms have either excess energy or mass. The emissions of the excess energy or mass give off radiation. Radiation is measured in rem (roentgen equivalent in man) unit doses. Radiation can cause burns, cancers, and death when it comes into contact with organic material. Types of radiation include electromagnetic, particulate, and ionizing radiation. We also experience radiation from cosmic rays and naturally occurring radioactive materials, this is called natural background radiation exposure. The dose of radiation you receive is depended on your altitude; the higher you are the higher the cosmic radiation dose. 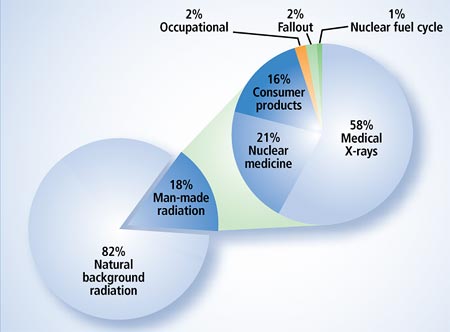 ×
Show's what percent of each type of man-made radiation we are exposed to.

Provenance: LE Magazine October 2005 http://www.lef.org/magazine/mag2005/oct2005_awsi_03.htm
Reuse: This item is offered under a Creative Commons Attribution-NonCommercial-ShareAlike license http://creativecommons.org/licenses/by-nc-sa/3.0/ You may reuse this item for non-commercial purposes as long as you provide attribution and offer any derivative works under a similar license.
Natural radiation sources include radon, cosmic radiation, and elements in the ground. Radon is the leading source of radiation exposure and the second leading cause of lung cancer. It is found many places, but most prominently in the soil. The ground all around us has varying levels of naturally occurring radioactive elements that can turn into a radon gas. Cosmic Radiation comes from various types of radiation from outer space, for example, gamma rays and heavily charged particles. Our atmosphere can absorb and filter some cosmic radiation however, some still makes it through so we receive small doses. The following chart from the National Council on Radiation Protection and Measurement (NCRP) show's our annual dose of each natural radiation source. Natural Radiation Sources (Acrobat (PDF) 2.6MB Dec7 12)

How Radiation Enters The Body

Provenance: http://www.ilo.org/safework_bookshelf/english?content&nd=857170496
Reuse: This item is offered under a Creative Commons Attribution-NonCommercial-ShareAlike license http://creativecommons.org/licenses/by-nc-sa/3.0/ You may reuse this item for non-commercial purposes as long as you provide attribution and offer any derivative works under a similar license.

Radiation in your Food

Since the dosage of rems of radiation represents the amount of tissue damage, the higher the radiation dosage of rems you are exposed to, the more harmful the effects. We are exposed to low doses of radiation that don't have much of an effect on us, however levels as low as 25 rems can cause changes in the blood. The first radiation sickness symptoms start appearing when a person reaches doses above 100 rems. Symptoms of radiation sickness include headache, nausea, vomiting, and some loss of white blood cells. Radiation doses over 300 rems are very harmful. It causes hair loss and significant internal damage. Because mutated cells are emitting excess energy and mass, it is being transferred to the healthy cells in the body; therefore, mutating them. This dosage causes a severe loss of white blood cells, weakening the immune system and making victims susceptible to disease. Another side effect that can appear is blood clotting and hemorrhaging due to the reduced production of blood platelets. A person exposed to 450 rems only has a 50% chance of survival. Once exposed to 800 rems, there is no chance of survival. 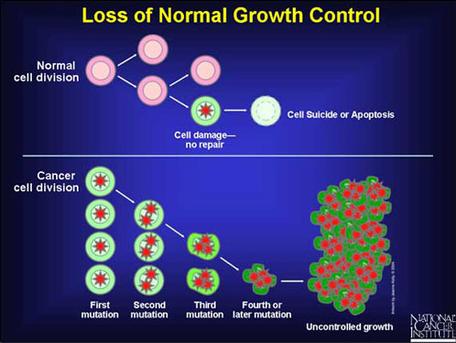 Provenance: Understanding Cancer Series:Cancer cancer.gov
Reuse: This item is offered under a Creative Commons Attribution-NonCommercial-ShareAlike license http://creativecommons.org/licenses/by-nc-sa/3.0/ You may reuse this item for non-commercial purposes as long as you provide attribution and offer any derivative works under a similar license.

Because ionizing radiation has the ability to break chemical bonds and change the charge of atoms, you are at a high risk for various cancers and DNA mutations. There are two categories for the health effects of radiation exposure based on the amount of radiation you were exposed to and how long you were exposed to it; stochastic and non-stochastic. Long-term, low-level exposure to radiation are stochastic effects. The primary health concern for people exposed to radiation is cancer, due to the uncontrolled growth of cells caused by damage, disrupting the body's natural cell growth processes. It also causes damages in DNA called mutations. There are also non-stochastic health effects which occur when a person is exposed to high levels of radiation, the health effects become more severe as the duration of exposure increases. If the person is only exposed to a high dosage for a short period of time it is called 'acute' exposure. Health effects present themselves much sooner in people with this type of exposure. People that have experienced 'acute exposure' may suffer from burns or radiation sickness.

The areas most vulnerable to radiation's negative effects are bone marrow and the thyroid gland. Because of bone marrow's sensitivity to radiation, the most common radiation induced cancer is Leukemia. Radiation can cause cancer in any part of the body, but it is most commonly linked to lung cancer, skin cancer, thyroid cancer, multiple myeloma, breast cancer, and stomach cancer.

×
Shows the development of cancer from mutated cells

Provenance: encognitive.com
Reuse: This item is offered under a Creative Commons Attribution-NonCommercial-ShareAlike license http://creativecommons.org/licenses/by-nc-sa/3.0/ You may reuse this item for non-commercial purposes as long as you provide attribution and offer any derivative works under a similar license.

There is no way to completely avoid radiation exposure however; there are measures you can take to minimize the amount of radiation you are exposed to. Before choosing a house you should have the house and surrounding soil tested for levels of radon and other radioactive gasses. You can buy inexpensive testing kits to test for radon levels. If you find that you do have high levels of radon at your home and aren't planning to move you can have an active soil depressurization (ASD) system installed. This reduction technique uses a fan and vent pipe to vent radiation from beneath the house. 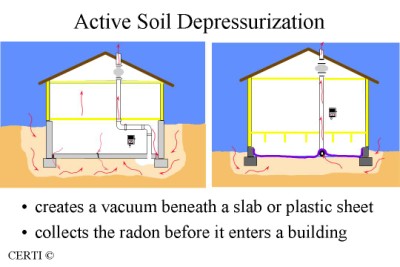 ×
Shows the interior installation of an active soil depressurization system.

Provenance: anconsulting.ca
Reuse: This item is offered under a Creative Commons Attribution-NonCommercial-ShareAlike license http://creativecommons.org/licenses/by-nc-sa/3.0/ You may reuse this item for non-commercial purposes as long as you provide attribution and offer any derivative works under a similar license.

This source has good background information on the basics of radiation.

This source has good information about natural and man-made radiation sources.

This website provides information on the entry pathways for radioactive materials.

This source explains how radiation causes cancer and what kinds of cancer you are at highest risk for when exposed to radiation.