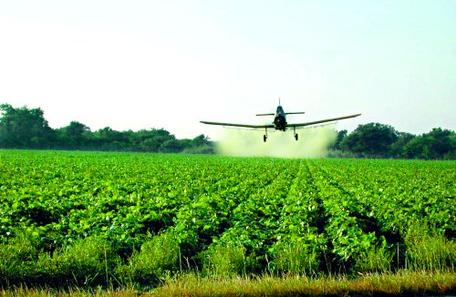 Hide
Crop Dusting. Source Citation : Pesticide Information Center at the University of Florida http://pested.ifas.ufl.edu/newsletters/november2007/washington.htm
A pesticide is any substance or mixture of substances intended for preventing, destroying, repelling, or mitigating any pest (epa.gov). Pests can be defined as any organism that causes plant diseases. Agricultural pesticides are then those chemicals that are used by farmers to prevent the effectivity of the pests on the growth and productivity of agricultural crops.

Pesticides are either restricted or unclassified.

Restricted means it can cause harm to humans or the environment.

Unclassified refers to all other pesticides.

Pesticides are made up of active and inert ingredients. There are certain labeling requirements for the commercial distribution of products that used agricultural pesticides. The active ones are those which do the damage to the pest, federal law mandates that these ingredients be clearly labeled on the packaging. Inert ingredients are not required to be labeled as they do not cause harm, they are usually present as a solvent in the solution. (inert ingredients are not necessarily non-toxic). All pesticides must be registered with the EPA before they can be sold or distributed. There are many tests and requirements concerning the potential effects of the pesticides in order to be approved.

Pesticides can be incredibly beneficial and have most certainly increased food production. They were of great importance in saving the United States' potato crops during the 1940's from insect and fungal pests, as well as controlling the boll weevil in El Salvador in 1953 (Monosson, 1).

Yet many times their detrimental effects outweigh the positive ones. Pesticides can be extremely hazardous to the human body and other living organisms, as they are designed to be a poison.

Here is a link to the EPA's webpage about agricultural pesticides. 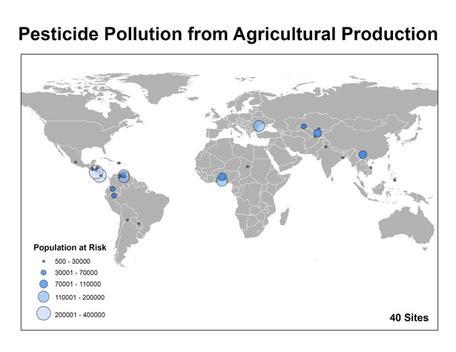 Pesticides became common after the second World War as part of the war effort was scientific research into a way to end hunger, i.e. pesticides and the increasing productivity and availability of food production with their help. Currently an estimated 3.2 million tons of pesticides are used each year.

Pesticides can be transported to humans or other organisms in a variety of ways. It is near to impossible for the pesticide to only affect its targeted crop.

-Wind is one transportation method. The wind picks up the pesticides and can blow them onto other farms or into rivers.

-It can be absorbed into the soil and then taken up by other organisms or can contaminate the surface and groundwater that run over/through it.

- Pesticides are then absorbed by the plants which is detrimental to the growth of the plants.

- That which is not absorbed usually remains on the surface and flows into streams as surface runoff. It is dissolved into the water and then can be taken in by plants and animals. The streams would then be considered a reservoir of pesticides with a relatively high abundance level.

Pesticides frequently enter the world's surface and groundwater through either point source (direct locations where excess pesticides spill, or non-point sources, where the pesticides enter the streams through wind flow, precipitation, runoff, and leaching. These pesticides can accumulate in a surface water source such as a lake, stream, or pond, they can also leach down and become integrated into the groundwater reserves such as reservoirs.

Pesticides enter the food chain through the direct application of the substance to the plants themselves by humans. Once they are absorbed by the plants or animals which eat the plants they become residue. There are maximum residue levels for crops and animals. They can also be taken in when an organism takes in the water which contains the runoff and dissolved pesticides. This can be further extended to the human who eats the fish. An easier way for humans to ingest pesticides is directly through contaminated drinking water from those polluted streams.

An estimated 2.2 million people are at risk due to exposure from agricultural pesticides, with the majority of this population being locating in developing nations. 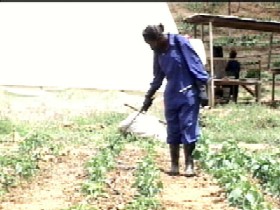 Pesticides can enter the human body through inhalation, ingestion, or by dermal penetration through the skin. Those who work with agricultural pesticides are the most at risk if they are not properly dressed or if there are broken and leaking equipment. The majority of average citizens who are effected by the pesticides intake the pesticide through consumption of a food that was been contaminated with a pesticide."In 1958, all members of the family of a local chief who is a prominent cocoa farmer at Okebode in southwestern Nigeria were hospitalized after eating a leaf vegetable undergrowth of a cocoa farm that was earlier sprayed by lindane. In 2004, carbofuran pesticide residues found on several batches of noodles manufactured in Nigeria may have resulted in 23 reported cases of vomiting and one death" (Monosson, 1). 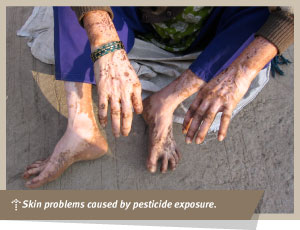 Pesticides cause headaches, blurred vision, vomiting, abdominal pain, suppress the immune system, lead to blood and liver diseases, depression, asthma, and nerve damage. The issue with these effects is that they may wait appear until a while after being ingested so tracing the symptoms back to the pesticide can prove to be quite difficult. Many of the symptoms can be mistaken for the flu and therefore not properly treated. The inactive ingredients such as chloroform can also cause serious risks to the liver and nervous system. These effects can also be experienced by the animals living around the streams where the pesticides accumulate. The pesticides bioaccumulate within the animals as they are not easily soluble, as that animal is eaten by another animal the pesticide then biomagnifies and obtains an even higher concentration as it moves further up the food chain.

The easiest way to prevent the spread and abundance of agricultural pesticides is through education. If more farmers, especially in developing countries, knew about the risks of these pesticides, they would be more careful in the way that they use the pesticides and the protection that the sprayers wear. Another way is to adopt the Integrated Pesticide Management program which "emphasizes non chemical and cultural pest control strategies such as removal of diseased plant parts, crop rotation that may disrupt the life cycle of pests, and biological control such as the use of insect predators" (Monosson,1). Particular attention needs to be paid to the developing world as their lower health status makes them more vulnerable to disease and they are usually dependent upon farming as their main source of income and economy. In more developed countries where health and wealth are not such huge issues, consumers can decrease their risk of consuming agricultural pesticides by selecting products that are deemed organic which means that no pesticides were used during the production of those foods.

Non government organizations are providing the best prevention strategies at the moment. There are groups that provide educational sessions, telephone hotlines, and safety classes. The UN Food and Agriculture Organization and the convention on Persistent Organic Pollutants are making global efforts to decrease the presence and abundance of the harmful pesticides.Many states within the United States have installed a Clean Sweep program which provides for proper cleanup and disposal of these pesticides.

Rachel Carson had a masters in Zoology and worked for the U.S. Fish and Wildlife Service for 15 years. Carson published many books on ecology but her most famous was published in 1962. Silent Spring displays the harmful effects of agriculture pesticides such as DDT. This book was intended to educate the scientific community as well as the general public. It is the perfect example of a widely used agricultural pesticide that was not known to be harmful, the publication led to the subsequent banning of this pesticide in the U.S. and most other developed nations.

Steingraber was diagnosed with cancer and as a biologist she searched for the roots of her disease. She found that it most likely came from the high concentrations of toxins in her hometown drinking water supply. She then goes on to draw connections about other incidences of cancer in major cities where there were high toxin levels.

Robert Van Den Bosch is a professor at the University of California and has conducted research exploring the harmful effects of agricultural pesticides. In his book he explains how truly detrimental these pesticides are and advocates for the end of their use. As this book was published in 1989, Van Den Bosch received much criticism from the pesticide industry and many supporting government officials as the detrimental effects were not very well known at that time.

This book describes in depth what exactly agricultural pesticides are and the harmful effects they can have on the environment. It also looks at solutions to the inefficiency of using pesticides. It analyzes the current trends in pesticide use as well as extrapolates on future advancements.

This is a link to the EPA's page on Agricultural Pesticides. It provides a breadth of information of general aspects of these pesticides as well as their use and the current methods of regulation and control.

This website provides information on Rachel Carson who is the most famous biologist on the harmful effects of agricultural pesticides. It provides a biography, links to all of her books, and links to additional research sources.

This link provides general information about agricultural pesticides and their harmful contamination effects.

This site looks at the top pollution problems each year and states Agricultural Pesticides as being one of the top ten for 2011. It displays the worldwide distribution and where the majority of the population that is at risk is located.