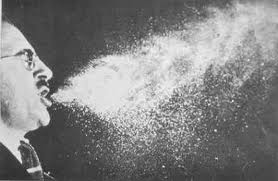 Hide
Photo of man sneezing. Photo credit: from Wikipedia
This case study is part of a collection of pages developed by students in the 2012 introductory-level Geology and Human Health course in the Department of Earth Sciences, Montana State University. Learn more about this project.
Do you ever wonder why you got sick? Was it because you didn't get enough sleep? Maybe it was because you shared chap-stick with someone? Or, what if your little sister forgot to wash her hands before she cooked dinner?

Well, the answer is probably blowing in the wind (Blowin' in the Wind, Bob Dylan).

Chances are that you most likely got sick from an airborne pathogen. In other words, the germ or irritant floated from one person to another. This happens a lot in the winter, for instance, because the air is dry, making our sinuses more prone to infection. Also people tend to stay inside more during the winter season, forcing us to breath in stuffy rooms shared by many other people.

Airborne microbes are biological airborne contaminants (also known as bioaerosols) like bacteria, viruses or fungi as well as airborne toxins passed from one victim to the next through the air, without physical contact, causing irritation at the very least (Earth Materials and Health, pg. 43). This usually happens when an infected subject sneezes, coughs, or just plain breathes. It is hard to prevent such a method of transmission. Airborne microbes are a major cause of respiratory ailments such as allergies and pathogenic infections (virus or bacteria).

In order to educate you about airborne microbes in different environments, I will let you know a little bit about when, where and how you can find these little, microscopic buggers and what kind of affect they'll have on you or your family. Everyone has their own natural microorganisms that live on, in and around their own bodies. These bacteria are known as natural flora and our own bodies (specifically the immune system) recognize that they are good for us. We, as humans, would not survive without such creatures. However, this website gives information regarding pathogenic microorganisms in general. That is, things that you can't see causing physical harm.

The cause of disease from an airborne microbe varies from species to species.

One example of an airborne toxin is called endotoxin or lipopolysaccharide which may be one of the most important human allergens (Earth Materials and Health, pg.61). Endotoxin is continually released from the cell wall of a gram negative bacteria during bacterial (the Gram-negative kinds) cell growth and decay. When comparing a gram-negative bacteria to a gram-positive, negative are more resistant against antibodies, because of their outer membrane, which the positive lack.These bacteria exist in soils and can be aerosolized; driving a tractor across a field on a dry day is a good example of causing high exposure to endotoxin. It can cause fever, shock and asthma.

In most cases, natural and anthropogenic (human caused) air pollution consists of complex mixtures of chemical and biochemical species as well as pathogens, and the earth-sourced or earth-hosted component can be difficult to asses (Earth Materials and Health, pg.62) More research can be done to improve human health by finding the sources of airborne pathogens geologically and atmospherically.

Basically, there are three major sources of such microbes: those arising from microbial decomposition of various substrates associated with particular occupations (e.g., "moldy" hay leading to hypersensitivity pneumonitis), those associated with certain types of environments (e.g., Legionnaires' bacteria in water supplies), and those stemming from infective individuals harboring a particular pathogen (e.g., tuberculosis).

Transport of Your Pathogen

Airborne microbes can move directly, from person to person through respiration, ingestion, and dermal contact or indirectly, from waste handling and loading of sewage, biosolids or animal wastes (Earth Materials and Health, pg.59). Also, fungal spores released by soil fungi into the wind can be a natural mechanism of transportation. The concept of airborne microbes is general. People can be affected basically by any naturally occurring or human caused process that kicks up dust or other small particles that might blow in the wind.

Natural contaminants, such as wind-blown dust from arid regions (a process known as desertification), can carry bacteria and fungi (Earth Materials and Health, pg.43). These bioearosols are associated with soil or vegetation because the microorganisms are usually transported by the aerosol, or in other words, the soil particle. This process requires dry conditions because the particles need to be light weight in order to be picked up by the wind. However, dry environments are not ideal for microbial growth, therefore this method of transportation is not as common.

According to a research paper found on the official website of the EPA, or Environmental Protection Agency, F.C. Tsai, J.M. Macher and Y-Y Hung (all from California) have concluded an experiment with the following statements:

"Outdoor concentrations of airborne bacteria generally were higher than those indoors but similar in summer and winter. Bacterial concentrations indoors showed more seasonal difference, which may be due to changes in occupant dress and activities as well as ventilation patterns during the cooling and heating seasons...The preliminary results in this paper provide baseline information on the concentrations of culturable bacteria in commercial and public buildings in the United States." 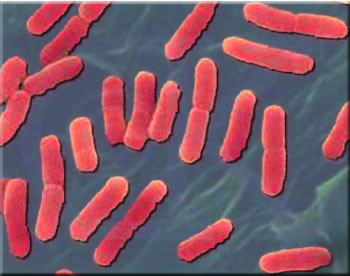 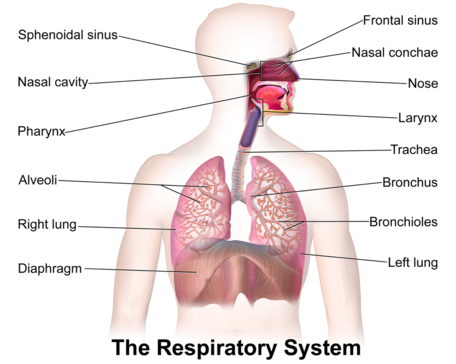 ×
Labeled diagram of the lungs/respiratory system.

Provenance: Bruce Blaus via Wikimedia Commons: http://commons.wikimedia.org/wiki/File:Blausen_0770_RespiratorySystem_02.png
Reuse: This item is offered under a Creative Commons Attribution-NonCommercial-ShareAlike license http://creativecommons.org/licenses/by-nc-sa/3.0/ You may reuse this item for non-commercial purposes as long as you provide attribution and offer any derivative works under a similar license.
(airborne bacterial diseases) 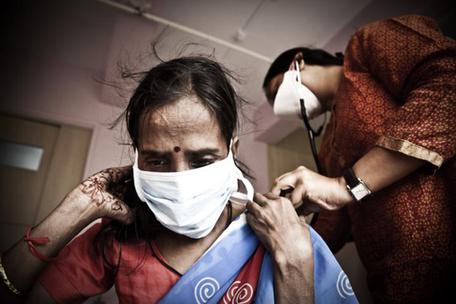 Provenance: http://www.doctorswithoutborders.org/news/issue.cfm?id=2404
Reuse: This item is offered under a Creative Commons Attribution-NonCommercial-ShareAlike license http://creativecommons.org/licenses/by-nc-sa/3.0/ You may reuse this item for non-commercial purposes as long as you provide attribution and offer any derivative works under a similar license.

(Centers for Disease Control and Prevention)

Many of the impacts on the human body listed above are preventable.

Some areas of the hospital are especially vulnerable to movement by healthcare workers that could stir up infectious microorganisms and particulates. Also, the patients in the hospital are more likely to be affected because of the weakness in their immune system or other physical detriment. Some methods of preventing pathogenic microorganisms from contact with people are filtration and ventilation. The HEPA filter is used in medical facilities, automobiles, aircraft, and homes; it physically removes particulates from air and the filter must satisfy certain standards of efficiency such as those set by the United States Department of Energy (DOE) (Kelly M. Pyrek, 2011). Proper use of ventilation in an indoor environment depends on how many people come in and out at any given time. Ventilation standards in the United States are provided in guidelines from the American Institute of Architects or the American Society of Heating, Cooling and Air-conditioning Engineers (ASHRAE) (Kelly M. Pyrek, 2011). Another method is personal respiratory protection, which involves the use of items such as gloves, gowns, shoe covers, head covers, masks, respirators, eye protection, face shields, and goggles.

In the U.S.A. in 1970, the National Environmental Protection Agency was established (NEPA).

"The law was established to foster and promote the general welfare, to create and maintain conditions under which man and nature can exist in productive harmony, and fulfill the social, economic, and other requirements of present and future generations of Americans."