Mercury is a devastating neurotoxin that has signficant health consequences in the United States and across every other developed country. Where there is any type of industry there is usually a risk of higher mercury levels effecting every envirnoment. Learn more about how mercury gets into the environment, what the health impacts are, and how to protect yourself from mercury poisoning.

Mercury exists in three different states and can form both organic and inorganic compounds. The central nervous system is the target organ for mercury poisoning, though mercury is also toxic to the kidneys. Chelation therapy with DMPS can increase the elimination of mercury and there are case reports showing that chelation therapy can reverse neurological damage due to mercury poisoning.

Mercury primarily effects the centreal nervous system. In clinical situations mercury poisoning presents itself in a variety of ways and is measured by the amount involved, the type of exposere, and whether that exposure was single or repeated.

Elemental mercury vapor can be absorbed quickly if inhaled and can easily cross the blood-brain barrier (the blood-brain barrier is a barrier maintained to separate the blood in the brain from the blood in the rest of the body to prevent the blood in the brain from becoming contaminated by things we eat and breath in on a daily basis). The vapor form is the most important when looking at the poisoning from the toxicology view because mercury vapor accumulates in the brain. When mercury is ingested the toxic effects are not as wide spread because the body will not absorb metallic mercury as much as the vapor form. If mercury is ingested it will accumulate in the appendix which could potentially cause infection or appendicidis due to the bodies inability to completely eliminate toxins from the appendix. Elemental mercury can be injected intravascularly which may lead to embolism and a person would exhibit systemic features of mercury poisoning. If mercury deposits in the soft tissues of the body (muscles are a good example) the result would be a reaction that produced granular deposits of mercury. The body would react to the mercury as a foreign body. 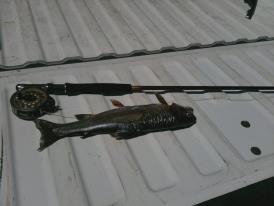 The major and most commonly know way the mercury gets into the biosphere is through the intake of fish. Minning of heavy metals are also avenues for mercury to get exposed to humans.

Near Bozeman Montana, the Madison River has higher than normal levels of mercury, according to Montana Fish Wildlife and Parks. Montana FWP warns that pregnant women and young children do not consume fish caught in the Lower Madison River on a regular basis. With this being said, it would be wise for all people to not consume fish caught in this portion of the river on a regular basis. Enjoying a rainbow or two caught on this part of the river every once in a while for the average joe shouldn't have any health effects but it is still better to understand the problems that can happen if mercury is consumed in larger amounts.

Inhaling mercury vapors causes headaches, coughing, nausea, vomiting, a metallic taste, chest pain, an inflammation of the tissues of the eye, and a shortness of breath. Pneumonia may develop and in some severe cases kidney and liver failure may occur. If repeated exposure to mercury continues (even at low levels) tremors, memory loss, changes in an individuals personality, lethargy, insomnia, and an effect of motor movements. Other health problems that may develop are and inflammation the the gums, an overproduction of saliva, and damage to the tubules of the kidneys that are responsible to reabsorbing nutrients and secreting toxins and body wastes. Periperal neuropathy between motor and sensory commands may develop.

Symptoms include the impairment of vision, hearing and sight as well as impairing sensation and a lack of coordination. Symptoms of mercury poisoning and the type and extent that a patient would exhibit depend upon the individual toxin, the amount they were exposed to, and how the exposure occured and how long it lasted.

To prevent mercury poisoning people should be aware of the levels of mercury of the environment where they are getting their food (especially where fish is concerned). To diagnose mercury poisoning in a clinical setting doctors can look at the fingernails. With mercury poisoning a line will form parallel to the cuticle of the nail. Blood and urine samples can also be taken and analyzed to determine the amount of mercury and form there the doctor will formulate a plan to remove the mercury. Neurological symptoms also play a role in diagnosis. If long term exposure of mercury is suspected a urine sample is taken as it is the most appropriate measurment but it a one time esxposure to mercury is suspected a blood test is run because mercury would not have made it into the excratory system in a short period of time. Chelation therapy is used to increase urinary elimination of mercury and will reduce the amount of mercury in the blood. If long term mercury exposure is diagnosed filtration of the blood is a common.

To find out more about mercury and all of its side effects visit the web sites: