What Will Climate Change Mean for Lyme Disease? 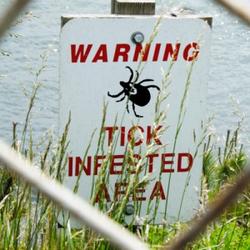 The first case of Lyme disease to be reported in the United States was in the town of Lyme, Connecticut, in 1975. The disease is caused by a bite of a deer tick (Ixodes scapularis) leading to a bacterial infection (Borrelia burgdorferi). With the impending changes to the climate, scientists expect to see the reported cases of Lyme disease to increase, as well as the disease to be able to occur in areas it previously had not. Arming yourself with knowledge of the signs and symptoms of the infection is paramount for those who spend time outdoors.

Hide
Lyme disease risk in US (Source: CDC http://www.cdc.gov/mmwr/preview/mmwrhtml/rr4807a2.htm)
Historically, Lyme disease is heavily present in the Northeastern United States due to its moderate climate. The feeding period of these ticks in the northeast is being prolonged due to the extended summer temperatures, allowing more time for uninfected larval ticks to become a carrier of the Lyme disease-causing bacteria. Researchers at Yale University have seen clear implications that as the planet warms, more reports of Lyme disease will be expected in the upper Midwest to match the amount of cases in the upper Northeast. Yale study (Yale University. "The Season Of Ticks: Could Climate Change Worsen Lyme Disease?" ScienceDaily, 27 Apr. 2009. Web. 6 Nov. 2012.) 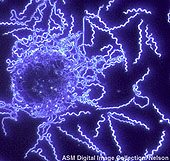 Borrelia burgdorferi is the name of the bacteria that causes Lyme disease. The nymphal deer tick is the carrier of this pathogen, contracting it from its blood meal. Following the bite of a pathogen carrying tick, the bacteria enters the bloodstream and the victim becomes infected. As the image to the left shows the B. burgdorferi has a spiral shape, this allows the pathogen to drill through the tissue of the victim, enabling the bacteria to travel throughout the body. 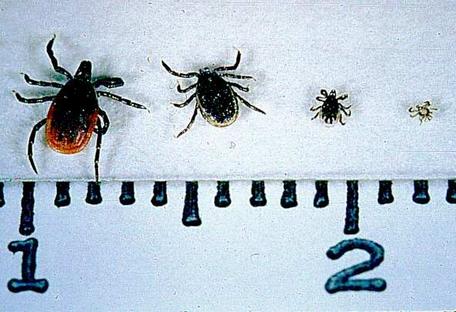 Hide
Deer Tick From left to right:The deer tick (Ixodes scapularis)adult female, adult male, nymph, and larva on a centimeter scale (Source:Winnebago County Health Department http://www.co.winnebago.wi.us/health/units/environmental-health/hazards/lyme-disease)
Deer ticks have an average two year life span, with three main life stages (shown in the image to the right) larval, nymphal and adult. They obtain one meal consisting of blood during each main life phase in order to survive. If the source of their meal is infected with the Lyme disease-causing bacteria (Borrelia burgdorferi) then it is passed onto the tick. In the tick's nymphal stage, it passes the infection to its next meal source - a human or other animal. This feeding cycle is seasonal and innately influenced by climate.

How Lyme Enters the Food Chain

When the larval deer tick is born it is not born as a carrier of the disease. The ticks need to obtain sustenance in order to survive, this nutrition comes in the form of a blood meal which they obtain by sucking the blood of other animals. If the larval tick gets a blood meal from a deer or in a more likely case, a mouse already carrying the disease, the larval tick is then infected with B. burgdorferi. In order to reach the next phase of the tick's life,the tick must obtain another blood meal in it's nymphal stage, and in the feeding process the tick passes the pathogen on to its meal source, which in some cases is a human. The human will, as a result, become a host for the pathogen. Deer have been the main suspect in being the carrier of the B. burgdorferi, but research shows that this may not be the case because the deer has the ability to flush the disease out of its system. The new suspect is the white-footed mouse, whose body does not entirely dispose of the bacteria. Predators, Prey and Lyme Disease.

Climate Change: What it Means for Lyme Disease

Climate change will have the following effects on Lyme disease: An acceleration of the tick's developmental cycle, a prolonged developmental cycle, increased egg production, increased population density, and a broader range of risk areas. The ideal habitat for these disease-carrying ticks is one with 85% humidity and a temperature higher than 45°F. The tick finds a suitable microclimate by using its thermoreceptors. Once the larvae have molted into the nymphal stage, the winter forces them to remain dormant until spring. An adult tick no longer needs to hibernate during the winter, so these ticks may become active on warm winter days, yielding a larger nymph population the following year. With an earlier winter thawing, nymphal-staged ticks will become active sooner. The warmer winters will also allow for a higher survival rate of the white-footed mouse, a popular host for the ticks, meaning an increased tick population in the spring and summer.

Signs and Symptoms of Lyme

Hide
"Bullseye" rash after bite (Source: NY Times http://www.nytimes.com/imagepages/2007/08/01/health/adam/19617Lymedisease.html)
At the site of the tick bite will be a "bullseye" shaped rash (called erythema migrans) and the rash will grow in size over a few days. Some people do not remember having a tick bite or rash. Such rashes should be a Lyme disease suspect if they occur in the summer months. The symptoms within the first few weeks of being bitten include: flu-like symptoms, fever and chills, extreme fatigue, headaches, muscle and joint pain.

The symptoms over 1-4 months can include: Extreme fatigue, additional skin rashes as the infection spreads, numbness in arms and legs, "brain fog", inability to control muscles in the face, and heart palpations.

For a late diagnosis the symptoms may include: inflammation of the joints, numbness and tingling in hands, feet or back, severe fatigue, partial facial nerve paralysis, problems with memory, mood or sleep.

Heart, nervous system and joint symptoms are among the first signs of the disease in people who did not have a rash.

The disease is treated with various antibiotics depending on the stage of the infection. There is an oral antibiotic for early-stage Lyme disease. The usual antibiotic for adults and children over the age of 8 is Doxycycline or Amoxicillin or Cefuroxime for adults, younger children and pregnant or breast feeding women. The recommended dosage is 2 to 3 weeks of the antibiotic.

For more serious cases of Lyme disease, such as when the central nervous system is being disturbed, an intravenous antibiotic is used. The treatment lasts from 14 to 28 days. This treatment is more intense and is effective in eliminating the infection. More time taken to recover from symptoms is expected. There are, however, side effects that come with this more intense treatment, including lower white blood cell count, mild to severe diarrhea, and possible infection of antibiotic-resistant organisms unrelated to Lyme.

In some cases people still experience symptoms of the disease after the treatment has been completed. Muscle aches and fatigue still persist and the cause of these continuing symptoms is still unknown. Some researchers believe that people who have been infected with Lyme are predisposed to other auto-immune diseases that are responsible for their current symptoms. Lyme Disease Research

Effect of Climate Change on Lyme Disease Risk in North America A scientific journal on the topic.

Under Our Skin A documentary on the controversy of Lyme disease and the struggles and triumphs of those infected with the disease.

Centers For Disease Control and Prevention