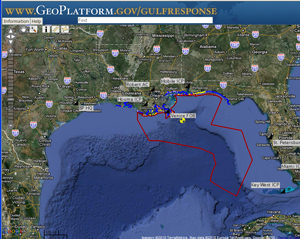 The British Petroleum oil spill made history on April 20, 2010. An explosion on the drilling platform caused the oil rig to begin sinking and as the oil rig sunk, millions of gallons of oil began dissipating into the Gulf of Mexico with no way to try and stop it. As the oil continued to leak out into the open ocean, not only sea life became endangered, human health did as well. Once the ocean became polluted with oil, it was only a matter of time until the effects began weighing on human health. 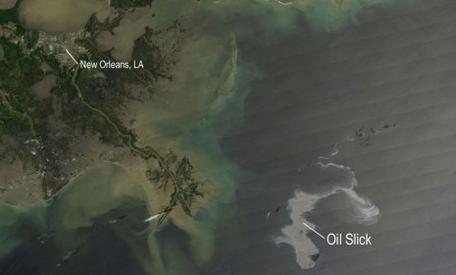 Hide
A view from space of the British Petroleum oil spill in the Gulf. Photo Credit: NASA http://theweek.com/article/slideshow/202516/the-gulf-oil-spill-6-worst-case-scenarios

The BP oil spill caused numerous problems within the ocean ecosystem and has continued to cause problems even after some time has passed. Issues such as genetic damage, liver disease, and cancer can occur within the wildlife among other aquatic life defects. Reproductive and developmental defects, as well as immune impairments have occurred and are still being documented as of 2012. However, the BP oil spill was not the only spill to occur in the Gulf of Mexico. Previous spills have also caused numerous problems in sea life. When the aquatic environment became toxic this affected humans too. As omnivorous consumers, fish are important to humans because of the important nutritious resources they provide. If these species become dangerous to eat, human health can be affected and may lead to abnormal disease or sickness. The purpose of this webpage is to provide education about the toxic effects that oil spills can have on the spill's surrounding wildlife; as well as the direct and indirect effects on humans.

Sources of the Health Hazard 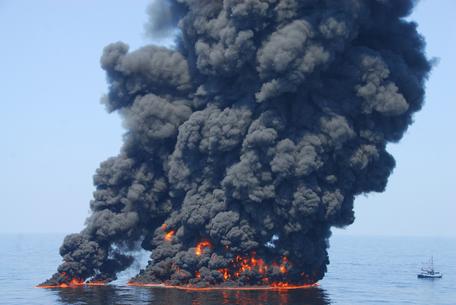 The oil spill source was found in the Gulf of Mexico about 250 miles south of Houston and has been named the largest accidental off shore spill in the history of the petroleum industry. The spill occurred due to a fault in the drill that was being used to access the giant oil field located deep beneath the sea floor. 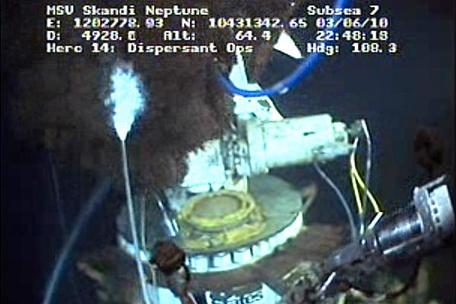 Hide
A top cap put on the pipe that was leaking oil into the gulf was still not enough to cut off the flow of oil on the sea floor. Photo Credit: BP/Reuters http://www.csmonitor.com/USA/2010/0604/Top-cap-on-BP-oil-spill-not-tight-enough-as-crude-keeps-spewing

Transportation of Oil After A Spill 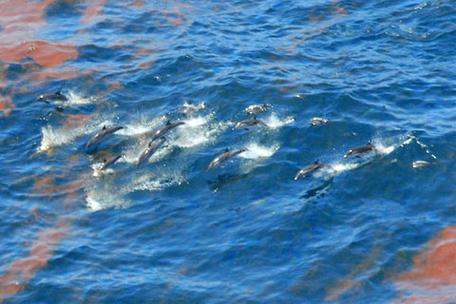 Hide
A dolphin pod swimming through oil in the middle of the ocean. Photo Credit: NOAA http://blog.nwf.org/2012/03/gulf-dolphins-still-struggling-to-recover-from-bp-oil-spill/
Since the spill occurred in the middle of the ocean, the toxins contained within the oil had a vast water highway system to quickly spread across the gulf, eventually making its way to the United States. Oil is compounded of carbon and hydrogen with about 16 carbon atoms that make up the chain. The stickiness of the oil concentrates into a glob form which makes it easier to attach to one another and can allow it cover a lot of ground. When the oil comes into contact with a different source, be it an animal, plant, crustacean or land, it literally sticks itself to the object. 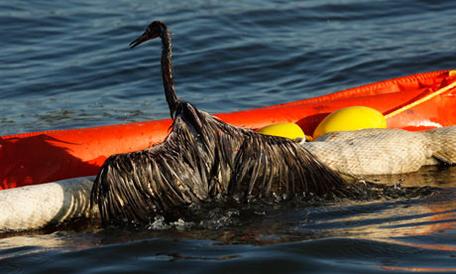 Hide
A Crane that has become covered in oil is struggling trying to fly. Photo Credit: (AP Photo/Gerald Herbert)
http://www.huffingtonpost.com/2010/06/26/tropical-storm-alex-bp-oi_n_626839.html
Migration patterns and food availability were disturbed as well as life cycles of marine animals. The area disturbed by the oil was in a region of essential fish habitat and where endangered species were living. The oil caused serious effects on their reproduction and caused death in some cases. Some of the affected species were already endangered, making the reduction in populations of these animals such as sperm whales, humpback and blue whales all the more serious. Animals and plants that live underneath and above the water were greatly affected by the oil spill. Once the oil made its way into the ecosystem and waterways, human beings began to feel the effects as well.

Feeling the Effects of the Spill

Not only did the British Petroleum oil spill cause problems within the marine life, it also affected human life. When the oil dumped out into the ocean, the oil was taken up into marine life, which are nutrient providers for humans. Humans consume sea food on a regular basis and therefore, when marine life such as fish, shellfish and larger game animals become toxic due to the chemicals from oil, this affects human health. 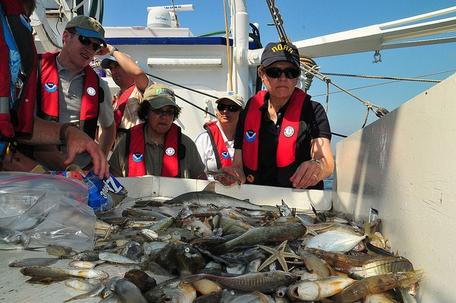 Hide
Scientists observing a large pile of dead fish brought onto the boat that were found within the area of the oil spill. Photo Credit: The Associated Press Archive http://www.nola.com/health/index.ssf/2011/11/health_study_of_bp_oil_spill_u.html

The Natural Resource Damage Assessment (NRDA) identified the potential injuries to our natural resources and lost public use as a result from the spill. The NRDA tried to eliminate problems as well as to restore the systems that were possibly dangerous or harmful to human health. For example, seafood made toxic by the oil spill caused harmful effects, such as damage to human immune systems. Direct exposure to the spill caused many skin irritations or rashes as well as upper respiratory problems for the crew working on the oil platform as well as to other humans in the surrounding area. After the platform exploded, great plumes of smoke rose into the air and were inhaled by people in the surrounding area. Other concerns brought about by the spill were memory loss, headaches and confusion as well as gastrointestinal problems from the dispersants from the oil. Although these dispersants won't be in the water and surrounding area forever, the effects felt immediately after the spill as well as some time later were a big concern to doctors and physicians as well. For the crews working to clean up the spill, the exposure to these contaminants was the main focus for health officials and they tried, to the best of their ability, to protect those clean-up crew members. However, controlling every aspect of the clean-up was difficult and therefore, not everyone felt comfortable working around the spill.

Effects on Marine Life and the Economy

Not only human health issues occurred after the spill. Fisheries and seafood market businesses suffered too. Since the general population was concerned about health issues created by the oil spill, seafood purchases plummeted and impacted the overall seafood economy. Also, entire ecosystems were destroyed or greatly altered in their appearance and in their abundance of wildlife. Once the environments had become infested with oil, the toxins within the oil took hold over many marshes and wetland areas and began to alter those areas greatly. Still to this day, after some time since the initial chaos of the spill, fisherman are still pulling certain species out of the water that have become severely mutated. Some of the long lasting effects on sea life are things such as shrimp with no eyes or eye sockets for that matter as well as crabs with no claws. Not only does this affect a fisherman's job and pay, but even more so, the spill caused damaging effects on certain species that may have inhibited their survival. 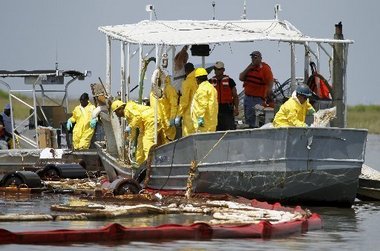 Hide
Workers checking the oil skimmers after a spill to collect data for research on human health effects after an oil spill. Photo Credit: NOAA http://usresponserestoration.wordpress.com/2011/05/25/insights-bp-oil-spill-iosc/

Trying to avoid the spill completely was not possible. People stopped consuming shellfish for an extended amount of time and many canceled vacations to the gulf. These actions did control the number of people affected by the spill, but only for a short amount of time. Over time, those people abstaining from physically interacting with the contaminants of the spill would still feel some effects economically. The BP oil spill caused numerous jobs to slow down or stop altogether until the spill was cleaned up. Even after the contaminant had been cleaned up, shellfish businesses were still struggling with polluted fish, oysters, clams, etc. and some states struggled to raise their tourist numbers. Bringing people down to the coast after the spill was a challenge for some time and many state economies felt the blow from the oil spill for some time. In recent years, tourist numbers have started to climb again, but for those wildlife species that have been altered in some way, the effects of the BP oil spill have managed to linger and will possibly still be wreaking havoc on those species for a long time. For the humans that directly felt the effects from the spill, whether it was from being surrounded by the smoke on the actual drilling platform, or physically interacting with the contaminants to clean up after the spill, those health effects have continued to be a constant reminder of the great British Petroleum Oil Spill of 2010.