Arsenic: is it a "Real Killer"

Arsenic is notoriously poisonous to the multicellular life. Many types of bacteria use Arsenic as respiratory metabolites. Arsenic in the ground water is a real problem to millions of people across the world and also more gold miners are being exposed and because of the mining arsenic is starting to go airborne and spreading and creating a real problem with 3rd world countries. Arsenic is a chemical element which occurs in many minerals, in conjunction to sulfur and metals, and in its pure form is crystalized. It is a natural element in its pure state As as a one compound isotope. Some of the risk to human health with arsenic is cancer to the lungs, stomach, and respiratory tract. Chronic exposure to arsenic can lead to dermatitis, mild pigmentation of the skin, vasospasticity, wart formation, decreased nerve conduction velocity, and lung cancer. Acute exposures can cause lung distress and death. To help prevent form arsenic poisoning wear gloves, masks and protective clothing when working with arsenic treated wood. If you live in high arsenic level areas filter your water and if you have well water get it tested.

Arsenic (As) It is found in many different minerals and is found in many places around the world. It was first documented in 1250 by a guy named Albertus Magnus. Arsenic is a metalloid and can exist in various allotropes. There is only one type of Arsenic that is helpful for industrial purpose. The main use of metallic Arsenic is to strengthen alloys such as copper and most of all lead, (a quick example of that is like car batteries). Arsenic is used for the production of pesticides, treating wood products, herbicides, and insecticides. Arsenic is found in groundwater and the reason why that is not good for Montana is because the main water source for Montana is groundwater. 94% of the rural domestic water supply is ground water and 39% of the public water supply is groundwater. You can see how that poses a threat to the people of Montana and even the livestock.

Sources of your Pathogen (or source of the health hazard)

About 1/3 of Arsenic is caused by volcanic eruption, this is the natural occurrence of arsenic. Inorganically arsenic is mainly found in groundwater all around the United States. It shows on this map [narrowimage 38046 Map of Arsenic][medium]

Hide
This is a map of Arsenic in ground water around the United States credit to USGS NAWQA
. A lot of the arsenic that is mined is mined out of gold mines and soil. Arsenic is caused by humans because they use it for industrial reasons. The big thing that arsenic is involved in is many types of rice and rice cereal. A study found that arsenic is found in many other rice products on grocery selves. http://www.consumerreports.org/cro/magazine/2012/11/arsenic-in-your-food/index.htm.

Transport of Your Pathogen (what's the bad stuff, how does it migrate or get concentrated)

When there is a volcanic explosion a high level of arsenic is thrown into the air. When arsenic is in the air and there is wind the arsenic will be scattered around to different places around the world. This is the biggest way it spreads the earth but it also spreads around when people treat wood and use pesticides and all that kind of stuff and that also will spread arsenic. Arsenic does have different oxidation states such as As4S10 and As4S4 this just shows that it binds with sulfur. [geoweb.tamu.edu/Faculty/Herbert/.../AsGroundwaterWorldwide.pdf]

Bioavailability (what is the uptake of bad stuff into the biosphere?)

Arsenic is found in soils and irrigation-water which enters into the food-chain through various food crops and fodders. Arsenic samples were taken from 2,500 water, soil and vegetable sources from arsenic-affected and unaffected areas were tested during 1999–2004. Other sources of foods and fodders were tested as well. Irrigating a rice field with groundwater containing 0.55 mg/L of arsenic with a water requirement of 1,000 mm results in an estimated addition of 5.5 kg of arsenic. Areas revealed that some commonly-grown vegetables, which would usually be suitable as good sources of nourishment, accumulate elevated amounts of arsenic. 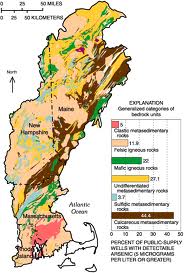 Impacts on Human Health (how were humans affected?)

Long-term exposure to arsenic in drinking-water is proven to be related to increased risks of cancer in the skin, lungs, bladder and kidney, as well as other skin changes such as hyperkeratosis and skin pigmentation changes. Skin lesions, lung and bladder cancer have been reported from various sources. The lethal dose of arsenic ranges from 120 to 200 mg in adults and is 2 mg/kg in children. When arsenic is inhaled the compound element immediately absorbs into the bloodstream and the amount that is absorbed depends on how soluble the arsenic is. The amount of arsenic in the body can be estimated by taking samples of blood, urine, hair, or nails.

If one works with arsenic-treated wood at home, the individual should take precautions to prevent negative impacts on their health. They should wear a dust mask, gloves, and protective clothing. One must not burn any wood that has been treated with arsenic compounds. If one lives in an area with high natural levels of arsenic, use pure sources of water. Limit contact with soil, and have well water tested for a variety of contaminants including arsenic.To avoid arsenic poisoning, keep away from pesticides, wood treatments, and untreated groundwater. Avoiding volcanic eruptions is important as well because that is the main way arsenic is spread.

[144.206.159.178/ft/1000/64793/1105802.pdf] (Talanta, Elsevier) This shows how arsenic spreads around the world and how much is normally spread throughout the world. [www.iah.org/downloads/accpub/arsenic_gw.pdf] (World Waternet) This is just talking about the world groundwater and how arsenic is seeping into the water wells from the soil and getting into the main water supply. The worst place is Bangladesh because 80% of the water is tainted with arsenic.

http://www.patient.co.uk/doctor/Arsenic-Poisoning.htm Patient.co.uk This just gives a little history about arsenic and explains about the poisoning.