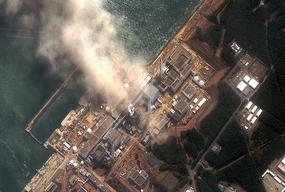 The magnitude 9.0 earthquake that struck Japan on March 11, 2011 resulted in emergency shutdowns at many of Japan's nuclear power plants. At the Fukushima Daiichi power plant, a loss of electricity allowed three reactors to overheat. Despite ongoing attempts to cool the reactors, partial meltdowns of the reactor cores likely occured.

Browse the complete set of Visualization Collections. If you have comments or additional resources to add to the page, use our Feedback box.

Tsunami Site Guide - a collection of teaching materials about tsunamis

Earthquakes Site Guide - a collection of teaching materials about earthquakes

Forecast for Plume's Path Is a Function of Wind and Weather (more info) This animated map is based on a forecast by the Comprehensive Nuclear Test Ban Treaty Organization. The map shows how weather patterns might disperse radiation from a continuous source in Fukushima, Japan. The forecast does not show actual levels of radiation.

How a Reactor Shuts Down and What Happens in a Meltdown (more info) This page from the New York Times contains two sets of interactive visuals. The first illustrates the loss of cooling at Japan's Fukushima nuclear power plant. The second visual portrays a possible series of events that caused explosions at the power plant.

Video: How Japan's Nuclear Crisis Unfolded (more info) CNN's Anderson Cooper takes a look back at how troubles at a Japanese nuclear plant have unfolded. This synopsis begins with the earthquake and tsunami on March 11, 2011 and runs through March 16.

Timeline: A Nuclear Crisis Unfolds In Japan (more info) This interactive timeline shows the sequence of events as operators at the Fukushima Dai-ichi nuclear power plant have struggled to contain the reactor problems that followed the earthquake and tsunami on March 11, 2011. Each day in the timeline contains links to related news stories and blog posts.

Timeline: How Japan's nuclear crisis unfolded (more info) A timeline of events, from CNN, at efforts to contain the damage and avert a potential nuclear meltdown. (all times and dates are local).

Japan's Quake and Nuclear Emergency Coverage ( This site may be offline. ) From IEEE, this site hosts continuing news and analysis of the events following the 2011 earthquake.

IAEA Update on Japan Earthquake (more info) News from the International Atomic Energy Agency on the 2011 Japan nuclear emergency stemming from damage caused by the March 11 earthquake and tsunami.
Nuclear Power's Global Fallout Science magazine has created a map that provides a snapshot of the number of nuclear reactors in operation and under construction worldwide, locations of power plants in relation to seismic hazard zones, and reactions to events in Japan in some countries.
False map about nuclear fallout - This website from Snopes.com describes a false map showing nuclear fallout affecting the Western US.

Meltdown at Three Mile Island (more info) Part 1 of a 6 part series provides a perspective of the Three Mile Island accident, with a minute-by-minute summary of the events that occurred during the partial meltdown. (9 minutes)

Background on the Three Mile Island Accident (more info) This summary by the Nuclear Regulatory Agency describes how the sequence of certain events – equipment malfunctions, design-related problems and worker errors – led to a partial meltdown of the TMI‑2 reactor core but only very small off‑site releases of radioactivity.

Revisiting Chernobyl 20 Years Later (more info) This page by the International Atomic Energy Agency contains videos, a photo gallery, questions and answers, reports and a timeline of the Chernobyl accident.
Back to top

Reactor Types (more info) This site from the NRC provides animated diagrams of the two types of nuclear reactors used in the US, the pressurized water reactor and the boiling water reactor.

Radiation Dose Chart (more info) This is an illustration of the ionizing radiation dose a person can absorb from various sources. It provides a visual comparison of doses ranging from 0.1 microsieverts (from eating a banana) to a fatal dose of 8 sieverts.
Back to top

Energy resources from across Teach the Earth »

Energy resources from across Teach the Earth »