Overview of the technique 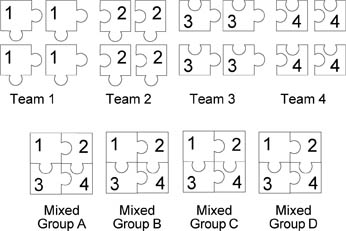 Download detailed steps for using the jigsaw technique (Microsoft Word PRIVATE FILE 30kB Jun15 05) The jigsaw technique was originally developed in the early 1970s at the University of Texas by Elliott Aronson, and his website (more info) has additional information on the technique.

The following example provides a simple illustration of a jigsaw assignment that requires no student preparation and that can be used in a large class. Jeff Niemitz (Dickinson College) uses this in a class of 120 to introduce the topic of igneous rock classification.

An analysis of the assignment shows the hallmarks of the jigsaw technique:

Other examples of jigsaw assignments

Show an example of using the jigsaw technique in the field

Hide
While on a field trip, students are divided into teams of 3-4. At each outcrop, each team is assigned a portion of an outcrop to examine closely and given an assignment pertinent to the character of the field trip (e.g., based on what you can see in your section of the outcrop, what is the structural history of these rocks? the depositional environment? the intrusive relationships? the rock types?). After each team has examined its section, mixed groups rotate through the sections of the outcrops, with each team member sharing what he/she discovered and discussing what the group can determine overall from the outcrop. This technique encourages students to look closely at an outcrop, rather than wandering around and looking only casually, and also drives home the point that what you conclude depends upon the outcrop exposure.

Hide
Students are divided into teams of 3-4 and look at a particular group of thin sections or samples. Once each team is done with its study, mixed groups form, and team members share what they have learned about their samples/sections. Groups then consider the implications of similarities and/or differences. The advantages of this strategy are two-fold: 1) few of us have enough multiple thin sections for all students to easily look at identical thin sections and 2) looking in detail at a few thin sections/samples and in general at a number of others gives students both the practice in detailed analysis and the experience of seeing the variability between thin sections/samples without requiring them to see all of in excruciating detail.

Show an example of using the jigsaw technique in class with different but related data sets, with template analysis

Hide
On many occasions, we'd like students not only to analyze a given data set but also to work with several other examples to see how they relate to one another, vary from one another, or can be combined to make a complete picture. Commonly, however, there's not enough time for students to do a complete analysis of several data sets, or it would be repetitive to have them do more than one. The jigsaw technique is a great technique to allow students to spend time analyzing one data set in depth and learn about others in less depth from a peer. The in-class activity that can be downloaded below is a good template for providing students with different data sets (in this case stratigraphic columns) for analysis during class. This particular jigsaw does not require students to prepare outside of class. The download also includes an analysis of the assignment so that it can be used as a template for designing other assignments. Download the assignment (Microsoft Word PRIVATE FILE 5.7MB Jun15 05)

Show an example of using the jigsaw technique with reading assignments on different, but related, topics

Hide
After having learned several techniques for measuring strain in real rocks in a structural geology course, the instructor assigns a different research article from the published literature to each of four teams. Before class, each student reads his/her article and prepares written answers to a set of questions, which the instructor collects in class. The instructor meets briefly with each team to make sure that no important points have been missed. In mixed groups, each person teaches the rest of the group about his/her article, and the group has a discussion on which articles show the best examples of 1) establishing volume loss during deformation, 2) establishing whether deformation involved pure shear, simple shear, or compound strain, 3) establishing the orientation of foliation with respect to the principal directions of the strain ellipsoid, and 4) establishing what variables appear to govern foliation development in rocks. Each person is responsible for learning enough from the other group members to then write an individual summary explaining two examples for each of the four points.

Show two examples of using the jigsaw technique with outside preparation of different but related reading assignments, with template analyses

Hide
These jigsaws require students to prepare outside of class by answering specific questions in order to insure adequate student preparation. Simply asking students to read and "come prepared" rarely results in adequate preparation. The second assignment also has a specific task that asks students to plan how they will teach what they have learned. Both have interesting group assignments that tie the individual presentations together. Both take about the same amount of class time as lecturing on the topic would (even including time to check to make sure that teams do, in fact, understand what they were supposed to prepare). In both, the students draw the conclusions themselves, as opposed to being lectured to. The downloads also includes analyses of the assignments so that they can be used as templates for designing other assignments. Download assignment #1 (Microsoft Word PRIVATE FILE 29kB Jun15 05) :: Download assignment #2 (Microsoft Word PRIVATE FILE 41kB Jun15 05)

Benefits of the technique

Course Design resources from across Teach the Earth »

Course Design resources from across Teach the Earth »