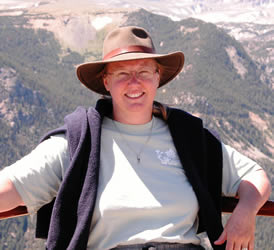 Engaging students in quality discussions of controversial topics so that they learn and know what science is and is not.

Seven years of experience bringing controversial topics, including evolution and global warming, to the college classroom. Since I'm not that familiar with Bloom's taxonomy, I didn't recognize the "affective domain." I have since read all the links that are provided on this website and have expanded my search for other information on this topic. I am willing to share those links with the site.

Essay: Can I pass this class if I don't "believe" in ... ? Motivations and Attitudes in Student Learning

For the past twelve years I have had a ten-percent portion of class grading based on "Attitude & Attendance (A&A)." My students laugh nervously at the title (I've tried a few; this one seems the most realistic), but it is the hardest part of the overall course grade that I assign each student at the end of the semester. Students earn points (mostly objective) for quizzes, labs and other assignments; I make a subjective decision as to their A&A. Ten percent can often be the difference between two letter grades. After writing this essay, perhaps I'll change "A&A" to "M&A" (Motivation & Attitude).

In part, it is difficult for me to assign this portion of the grade because I AM an emotional person. Sometimes it's hard for me to be a scientist, but perhaps this is part of the reason that I have been successful in teaching controversial topics in my courses. I understand the students need to be emotional about things that concern them personally. I allow discussion of these feelings in my classes for a short duration. However, I am careful not to let it distract from the learning of science. I ask them all to be skeptical, yet open-minded - the traits of a good scientist. As difficult as some of these discussions may be, they let me see into the students' im/perceptions of the topics. There are a few interactions that have stayed with me as I have journeyed through the academic haze.

After a lecture/discussion on the origin of the Universe in a liberal arts physical science class for elementary education majors, a student approached me to discuss the "revelation" she had had during class. Patti was a fundamentalist Christian who was having a difficult time as an older student in a crop of "twenty-somethings." She was also having a hard time with the "age of the Earth." She made a connection, somehow, that all the stuff of the Universe was part of us as humans and that stars and other heavenly bodies where just another way to reincarnation (or heaven). "Maybe there is something to this science stuff, after all." Wow, what a connection! Although I could not acknowledge her religious connection, I was glad that she had finally found someway to relate to science. This event happened about one-third of the way through the course and she showed dramatic improvement of her understanding of physical concepts after her revelation.

My first try at teaching Historical Geology frightened me. It was not my area of expertise and I was very apprehensive about teaching evolution in an area where people believed strongly on the "truth of the Bible." I had a very small class (7 students) and the first day went particularly well. There was a very inquisitive young man, Brian, who asked wonderful questions. I was actually looking forward to having him as a leader in the class. Brian did not return to class the next period. Two weeks later he stopped by my office to discuss his dilemma - he really needed this course to graduate that semester, but he couldn't stomach what he had read in the first chapter of the text. "I disagree with everything it says" he exclaimed. I invited Brian to sit down and discuss his feelings. I explained my position as a scientist and a teacher, and reassured him that he did not have to change his religious views in order to pass the class. I asked Brian only to be receptive to the scientific concepts and their explanations as presented in the course. He decided he would try it since he really needed the lab science credit. Brian became the best student in the class. Although his questions challenged me, they also showed me that he was really motivated about what he was learning. After the course was over, Brain came to me and told me "I understand why scientists would think Earth was older than 6,000 years; it must have taken along time for all those rocks to build up and change. Thank you for asking me to stay in the course." I have had many similar experiences since that time and Historical Geology has become one of my favorite courses to teach. In fact, the title of this essay comes from a student who took this course and got an A.

My next challenge occurs in the upcoming semester. I will be teaching for the first time, a sophomore-level course on Earth System Science which has an emphasis on global change. I've already had two of the six registered students tell me that global warming is just part of the natural cycle and there is nothing we can or should do about it. I'm looking forward to this class enormously.

See more Participants and their Essays »

Two-Year Colleges resources from across Teach the Earth »

Two-Year Colleges resources from across Teach the Earth »