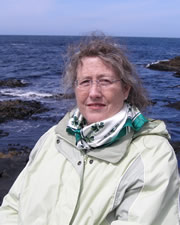 Engaging students in active learning over several different course formats including the field. I have used Bloom's taxonomy over the past 6 years in all of my courses as a way to help students understand that there are many ways of thinking and how to recognize these ways of thinking in readings examples and when preparing for and taking exams. Working with K-12 teachers in understanding their local geology.

In teaching evolution, the affective domain plays a significant role in my students' learning. As we all know students come into physical or historical geology with diverse ideas, information and attitudes about evolution. I have found that my students need a longer period of time, relative to other topics, through which to process ideas about evolution in both their cognitive and affective domains, with affective domain being the far more complex side to reach. I usually take 2-3 lecture periods, one 3-hour lab period and some out of class time necessary for students to do some writing and web-based assignments as we go through the evolution module.

Probably the most important and effective technique that has worked for me is to demonstrate to them on many levels that I am human and that scientists are human. For example, scientists have emotions, families, financial problems, as well as depression and other ailments that all humans fall prey to. Early on in the semester I bring this idea to the class and then reiterate it wherever possible. When they start to understand what science is and how it works, they also recognize that it is human beings that do science. We also discuss the distinction between a scientific conclusion based on data and an opinion or feeling about the conclusion. By the time we get to evolution, students have had several opportunities to work with data, pose hypotheses, make some inferences, draw some conclusions from their work and determine what their opinion or evaluation of the conclusion is. My first goal for them, when starting evolution, is to think and write about their opinion or feelings about evolution, so as to be able to distinguish that from the scientific data/evidence about and the historical development of evolution.

I use a diverse set of activities for our evolution module, including several from the PBS series on evolution. I use most of a 3-hour lab period or part of lab and one lecture period to watch the first PBS segment (2 hours) on Darwin. I have had tremendous success with this because it is a story-like rendition of Darwin's own affective and scientific journey to the Origin of Species. Students relate to this because they see that he is human and that he is being pulled is many different directions and he has to decide what to do with all of his ideas. I have students do a couple of very simple exercises associated with this first segment from the PBS evolution website. First, they read through several excerpts of Darwin's field notes and on a world map, they plot the location of the journal entries that they have. Second, they read two, one-page abstracts by each Darwin and Wallace, identify similarities and/or differences between their ideas (students are always amazed that two different people can come up with the same ideas, at the same time). Third, I ask them to tell me what evidence supporting evolution & natural selection from the video and readings they think is the most compelling and to explain the evidence and why they feel it is compelling. By the time we go through these first three activities students have a good sense about the scientific evidence for evolution and how the whole theory of evolution was developed.

After this introduction to evolution, the students are ready to move on to some more meaty exercises. I have lectured on the nuts and bolts of natural selection and answered the questions that have arisen as a result of the Darwin segment and the lecture. The next exercise that they do is a three-part, web-based writing lab on evolution created by Pamela Gore. This lab includes sections on the basics of evolution, the origin of whales and science vs. pseudoscience. The students work on this over a week or so, this way they can do some of the reading, think about it and then write their response. By the time they are finished with this exercise and some of the lab manual exercises the students are satisfied with what we have done. All students say that they have a better understanding of the scientific theory of evolution. Some students are now able to differentiate between their opinion or feelings about evolution and the science of evolution. Often times this is a great comfort to students who come into the topic very anxious and conflicted. In large part, I think that the introduction to Darwin might reduce some of the students' novelty space (new for me from one of the ancillary readings). I would like to understand more about novelty space and how to intentionally work with students on it.