The Lifestyle Project is a way for students to learn about environmental impacts by modifying their own lifestyles. It is a three-week exercise during which students reduce their impact on the environment by changing the way they live from day to day. The project has fairly rigid parameters, allowing students to achieve a gradual but definitive change in their everyday habits. They write about their experiences in journals, which are incredibly insightful and illustrate just how profoundly the project affects them.

Students choose three different ways in which they are interested in changing their habits. The possible categories are described below. For each category the rules are clearly defined, such as turning down the heat three degrees or eliminating the use of the car. Each week the project becomes more rigorous, because students will have to meet the requirements more frequently.

The Rules of the Project

The idea of this project is for students to make changes in their lifestyles that will have a beneficial effect on the environment. The changes aren't difficult, but they are significant. Mostly, they require that students plan ahead and think about their actions. 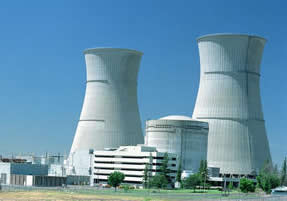 1. TURN DOWN THE HEAT

Students can be notorious for setting their heat at 80 degrees and lounging around in shorts and t-shirts all winter. In many campus living situations, students do not pay for their heat, so there is no incentive to keep the thermostat at a reasonable level. This category encourages them to expand their indoor comfort zone by turning their heat down and learning to dress appropriately, even while indoors.

For the first week of the project, students turn down their heat three degrees from its normal setting. For example, if the heat is normally at 77 during the day and 72 at night, they turn it down to 74 and 69. They leave it at this setting all week. In the beginning of week two, they lower the thermostat another three degrees, and then another three degrees for the final week. This results in a total reduction of nine degrees. This is an appropriate amount if students are starting at 75 or 80. If they are starting out at less than 75, then a two degree reduction per week may be more appropriate.

This option is limited to those who have control over their own thermostats and who have cooperative housemates! 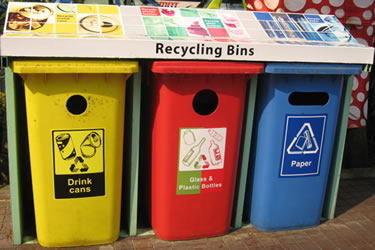 This is a category that can be completed by anyone. The idea is to spend an entire day producing no waste that would end up in a landfill. Students will have two waste-free project days the first week, three days the second week, and four days during the last week.

To accomplish this simple yet amazingly difficult task, students need to think before they act. Prior to purchasing a snack, the garbage output must be considered. A soda in a recyclable can is OK, but a disposable cup is not allowed. Better yet, they should opt for a refillable travel mug. Students quickly find themselves analyzing every move they make, which is simultaneously frustrating and enlightening. They begin to realize that many of our everyday tasks result in waste being produced.

Students are encouraged to reduce their garbage output by following a certain hierarchy. The best way to reduce the amount of garbage they create is by simply buying less, using less, and wasting less. The second choice is to opt for reusable items and to avoid buying new things that will eventually end up as garbage. Recycling is the third option, to be used only when the first two options fail. This follows the familiar mantra of reduce, reuse, recycle.

A question that immediately arises is if toilet paper counts as garbage. Students will be relieved to learn that it does not, because toilet paper goes to the wastewater treatment plant or a septic system, not the landfill. Moreover the project would be essentially impossible otherwise!

Cigarette butts are exempt from this category as well, because quitting smoking is beyond the scope of this project. However, all butts must be put in the garbage can, not on the ground or out the car window. 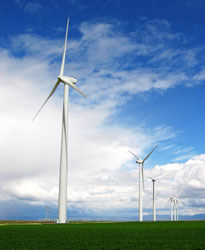 The Fossil Gulch Wind Park near Hagerman, Idaho. Photo by Stuart Van Greuningen, Idaho Energy Division.
This is another category that anyone can do. The idea is for students to try to reduce their electricity and water consumption by 50%. Attaining a 50% reduction may or may not be realistic, but by setting the bar high students are encouraged to keep striving to reduce as much as they can. This category follows the same schedule as the garbage category wherein students complete two project days the first week, three days the second week, and four days the final week.

Suggestions for students include the usual energy conservation tips such as turning off unneeded lights, TVs, stereos, computers and other electrical devices. Long, hot showers are the biggest culprit in the water usage category, so a 50% reduction is easily attainable by cutting the length of the shower in half, or by taking a shower every other day (or only once a day for those who have the urge to shower twice a day).

You may find yourself amazed by the lavish energy use of your students prior to the project! But this category is an easy way for them to moderate their energy consumption and to realize that having Christmas lights on in their dorm room 24 hours a day may not be a necessity after all. 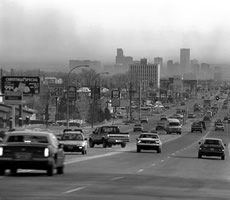 Air pollution over Denver traffic. US Dept of Energy photo by Warren Gretz.
Many of us have become conditioned to use our cars for every move we make. Depending on the layout of your campus, some people may even be in the habit of driving a few minutes across campus rather than walking from one building to another. In this category, students must not drive their cars on each of their project days (two days the first week, three days the second week, and four days the third week). Thus the rules are very simple. With the easy temptation of driving removed, students must instead ride the bus, walk, ride their bikes, or simply forgo joy rides in their cars.

Depending on your campus setting, you can opt to allow carpooling or not. Of course, carpooling is a great habit and saves energy. But in some cases, it is just too easy and does not promote a true reduction in students' dependency on their cars. 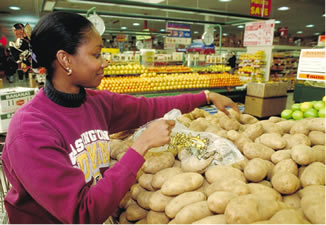 USDA Photo by Ken Hammond
The production of meat requires a large amount of water and energy, and also produces considerable waste. By reducing the amount of meat that we eat, we can have a smaller environmental impact. In this category, students learn that their food choices have a large effect on the environment. For each project day (two days the first week, three days the second week, and four days the third week) students adopt a vegetarian diet. For students who are already vegetarians or nearly so, they can take it a step further and eat locally-produced, organic, or vegan foods.

Some students may become concerned that they are not eating enough protein, which for most Americans is not a health problem. It is important to provide basic guidelines for protein intake (these are included in the student handout).


6. CREATE YOUR OWN CATEGORY

There are many different things that students can do to lessen their impact on the environment or to have a positive effect on the environment. This category allows students to be creative and come up with their own way of making a difference. Some ideas include writing letters to their senators, volunteering with the Sierra Club or Nature Conservancy, spending time cleaning up the campus, local woods or stream banks, setting up a carpooling system or recycling system in their dorm or workplace, finding ways to educate others about the importance of conservation, or changing their lifestyle in a way not described in the categories above. Students who choose this option should discuss it with the instructor before the project starts so that their ideas can be honed into a concrete plan.

Once students pick their three categories they are ready to begin the project and start creating their journals.