Cloud, 1988 suggests writing a course around the first three or four billion years of Earth history, which he referred to as the Cryptozoic. Much of the evidence we have on conditions at those times is new and rather sketchy, but thanks in part to the astrobiology initiative, our knowledge base for the Hadean and Archean is growing rapidly. In the meantime, soft-bodied fossils from the Proterozoic have been found in shales and in chert, and fierce controversies are springing up over the nature of the early atmosphere and evidence for equatorial ice sheets.

These early eons are very exciting: 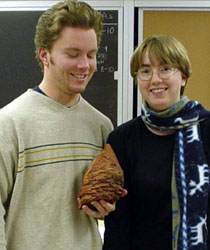 Earth: Evolution of a Habitable World is a planetary science course covering the whole of Earth history, but with emphasis on the Precambrian and Late Quaternary.

A course that focuses on a Precambrian topic is David Reis' interdisciplinary course Wonderful Life: Genes and Evolution: which deals with evolution from 4.5 billion years ago to the Cambrian (the time of the Burgess Shale deposits).