Paleontology in the News 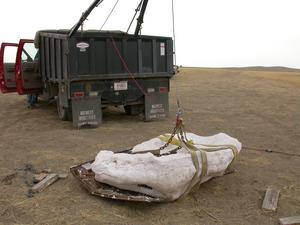 Museum of the Rockies vehicle Big Red with the pelvis of a duck-billed dinosaur, covered by its protective plaster jacket. Details

Paleontology and the Media

Paleontology as covered in the news media continues to be a contentious issue. Because the field is so diverse, discoveries are not necessarily well-publicized, quotes from scientists are often shortened for space, and sometimes news reports do not accurately reflect the science behind the story. Also, what may be fascinating to the public (i.e. "The Largest Dinosaur Ever"), may not be as interesting to scientists, and some scientifically fascinating discoveries may not captivate the public imagination.

This page provides links to current news reports and a sampling of contemporary important paleontological discoveries and issues. Because paleontology is a twenty-four hour a day, seven day a week scientific enterprise, and the rate of finds in its numerous fields is almost constant this collection only provides a small insight into the world of paleontology. The links provided can help anyone to continue his or her own search.

When Discoveries Make History in Science and the News:
Tyrannosaurus Gender and Soft Tissues. 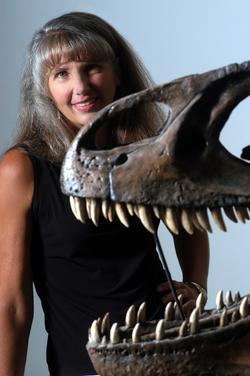 In 2005, Dr. Mary Schweitzer announced two groundbreaking discoveries in dinosaur paleontology. One was the identification of the gender of a dinosaur based on the bone tissue from its femur. The other was the discovery of soft-tissue preservation of blood vessel-like structures within the same individual. Perhaps even more important was that these finds were made in the a heavily studied dinosaur species, Tyrannosaurus rex.

Dr. Schweitzer's early research into preservation of soft tissue components began as a graduate student at Montana State University in the 1990's. She investigated hypothesized red blood cells in another Tyrannosaurus rex specimen which turned up evidence of the iron heme compounds that allow for red blood cells to carry oxygen.

More recently, Dr. Schweitzer has been researching the nature of molecular and soft-tissue preservation in dinosaurs and some early bird material.

For more information on Dr. Schweitzer and her publications, visit her faculty web page at North Carolina State University. 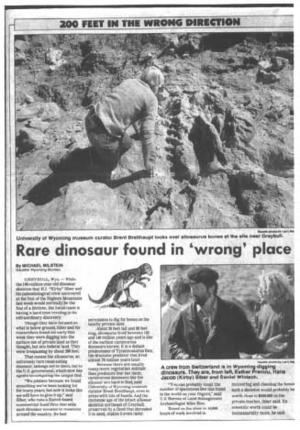 Hide
Article concerning the illegal excavation of Big Al, an Allosaurus from Wyoming. This find caused significant legal action, and restitution of the specimen to the Bureau of Land Management. Details

The following stories feature a selection of sensational finds that have been covered in the media.

The discovery of hundreds of feathered dinosaurs in China in the 1990's was so phenomenal that it lead to an international traveling exhibit. These advance meat-eating dinosaurs like Caudipteryx and primitive birds like Confuciusornis became incredibly popular because they represented the closest link between dinosaurs and birds since the feathered dinosaur Archaeopteryx was found in the mid-1800's in Germany.

Show me news stories about the feathered dinosaurs from Liaoning

Hide
News articles about the original discoveries in Liaoning

Transitions from the Sea to Land

In early 2006, scientists announced the discovery of the transitional fish fossil Tiktaalik found in the Canadian Arctic. Major evolutionary transitions, such as the transition from sea to land, are the constant focus of scientific study in such fields as the evolution of development, but seldom do scientists find fossils to work with like Tiktaalik, in part because of the scarcity of the fossil record from this time.

Show me news stories about Tiktaalik

Show me more information about tetrapods

Paleoanthropology is an important branch of paleontology, and although finds occur less frequently, when new species of hominid are found it is a very important event. In 2005, scientists discovered Homo floresiensis, a diminutive species of hominid related to Homo erectus.

The Origins of Life

The origin of life continues to fascinate scientists, philosophers, the media and the public. Discoveries in this field are continuous, but do not always receive a large part of the media spotlight. Studying origins is difficult, because the fossils from the first half of the Earth's history are often scarce, and sometimes highly altered by fossilization. But discoveries like early eukaryotic cells, and multicellular embryos continue to astound, and with better technology, more are likely in the future.

Show me news items about the origins of life

The topic of collecting rights of vertebrate fossils will probably always be a very important issue. On the one hand, fossils are eroding out of formations all over the world, and only a small number of paleontologists are available to excavate them leading many to advocate allowing the public to collect anything exposed at the surface. On the other hand, numerous commercial collectors have excavated these finds, selling them to private individuals or hobbiests at online auction houses, thereby trading away any information about the past that could have been gained in scientific study. Their key issue is information. Many commercial collectors and amateurs have collected hasty excavations in which the crucial information, the location of the animal in the rocks, its anatomical position, level of disintegration and relationships to other flora and fauna, were never recorded. Several dinosaur excavations have already led to subsequent legal battles.